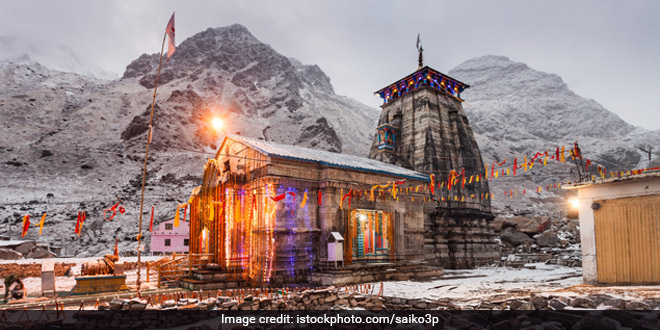 New Delhi: If you are planning to get on a journey-of-faith to one of the most revered temples of Lord Shiva, the Kedarnath, you may need to adopt an eco-friendly lifestyle and say goodbye to the habit of using plastic. This is because the district administration of Rudraprayag has decided to impose a complete ban on the use of single-use plastic items like disposable raincoats made of plastic, plastic bags, disposable cups, plates, straws, thermocol cutlery and other such items during the Kedarnath Yatra which will be start from May 9 and will end two days after the festival of Diwali.

Talking to NDTV about the plastic ban, Mangesh Ghildiyal, District Magistrate (DM) of Rudraprayag said that this year, the focus will be on making the Kedarnath yatra an eco-friendly event by reducing the use of plastics. Strict measures will be taken like imposing fines of upto Rs. 5000 on using single-use plastic items by the pilgrims and the shopkeepers on the trekking stretch of 16 km from Gaurikund village, the base camp village to the Kedarnath shrine in order to implement the ban.

Disposable Raincoats Make The Maximum Plastic Waste On The Himalayas

In the last two years, the district administration of Rudraprayag observed the plastic usage scenario in the Kedarnath during the months of ‘Yatra’ and found that the disposable raincoats make up the biggest chunk of the plastic garbage in the area. Mr. Ghildiyal said,

The climate in Kedarnath is such that almost every day after 12 pm, it rains. Thus, it is a usual practice among the visitors to keep a disposable raincoat/ poncho with them which is easily available at most places for a minimal price ranging between Rs. 20-50. Many shopkeepers on the trekking stretch to Kedarnath shrine also sell the disposable raincoats. The visitors buy these and after using it they just throw these raincoats in the valley or on the trekking stretch. As a result, the maximum garbage generated in the area comprises the disposable raincoats made of polythene.

The district administration has formed a nine-member ‘eco-development committee’ of the residents of the Gaurikund village to help in the implementation of the ban on disposable raincoats. The committee will be purchasing a number of reusable raincoats which they will keep at the starting point of the trek in the Gaurikund base camp for the pilgrims to take on rent with a nominal charge of Rs. 40-50. The pilgrims will be required to return the raincoats to the residents upon arriving back to the base camp.

Also Read: World Environment Day: This Indian Birdwatching Paradise In Uttarakhand Is Committed To The #BeatPlasticPollution Cause

How Will The Officials Ensure A Plastic-Free Kedarnath Yatra?

According to Mr. Ghildiyal the entire 16 km stretch from Gaurikund to the Kedarnath shrine has been divided into eight sectors as part of the ban implementation strategy. Each sector will be monitored by one sector magistrate who will be the district level officers deployed by the DM. These eight sector magistrates will be provided with ‘challan’ book and will authorised to impose fines of upto Rs. 5000 on the visitors and shopkeepers violating the ban on single-use plastic items.

The DM has also deployed police constables and home guards (auxiliary police force that provides supplementary services to the police during emergency situations) at the starting point of the journey at Gaurikund. The deployed personnel will be checking the luggage of the pilgrims for plastic items and also the shops on the ‘yatra’ stretch.

Apart from the personnel from the district administration and police, 200 volunteers from Sulabh International will be keeping a check on the use of disposable raincoats, plastic bags, and single-use plastic items during the yatra for all five and a half months.

Other Green Efforts To Make The Kedratnath Yatra 2019 Plastic Free

Packaged food items are posing a major challenge to us. Removing the packaged items would mean that there will be nothing left for the pilgrims to take with them on the journey. But we still have about 15 days to brainstorm and come up with practical strategies to avoid the use of food items packed in plastic like focusing on promoting local food items that are produced and packed locally using bio-degradable materials.

Mr. Ghildiyal further said that in order to curb the use of plastic, the district administration will be giving 10 shops to women from local self-help groups (SHGs) who will be providing local snacks.

Apart from this, dustbins will be kept at every few metres and littering will be kept under check with strict monitoring. The plastic collected during the months of the ‘yatra’ will be sent to a compactor in Sonprayag, a nearby village, to compact it.

Kedarnath is one of the most popular places for pilgrims. It is important to be mindful while visiting it. While preparing for the Kedarnath Yatra, do carry some paper bags and avoid plastic bags to keep the environment and shrines premises neat. Respect the ban.