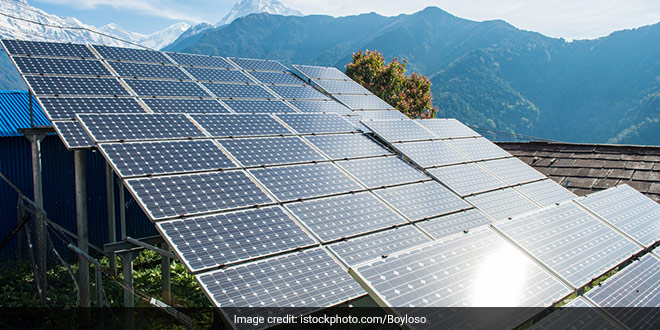 The solar project, a first of its kind in the country, realises the Prime Minister's vision of solarisation of the sun-temple town of Modhera.

Modhera: Prime Minister Narendra Modi on Sunday (October 9) declared Modhera in Gujarat’s Mehsana district as the country’s first 24X7 “solar-powered” village. Addressing a rally after the function, Modi said Modhera was once subject to countless atrocities of all kinds committed by invaders in the past, but is growing now with modernity while retaining its ancient character.

He said Modhera, famous for the Sun temple, will also be known as a solar-powered village. On the first day of his three-day visit to his home state, where elections are due in December this year, the prime minister inaugurated and laid the foundation stone for multiple projects worth over Rs 3,900 crore at the Modhera event.

The solar project, a first of its kind in the country, realises the Prime Minister’s vision of solarisation of the sun-temple town of Modhera.

It involves developing a ground-mounted solar power plant and more than 1300 rooftop solar systems on residential and government buildings, all integrated with a Battery Energy Storage System (BESS), as per a government release.

Whenever there will be talks of solar power, Modhera will be the first name to emerge. Because here everything is running on solar power. Whether it is light, farm….even effort is being made to run buses, vehicles on solar power. “For a self-reliant India of the 21st century, we have to encourage such efforts for our energy needs. I am working day and night to take the country in the direction of providing (energy security) for Gujarat, the country, and to our coming generation, said the prime minister.

Modhera is known for the Sun temple situated on the bank of the Pushpavati river. The temple was built after 1026-27 CE during the reign of Bhima I of the Chalukya dynasty.

Shifting to Gujarati intermittently during his speech, Modi said the solar rooftop project will help residents of Modhera not just generate free electricity for their needs but will also help them earn money by selling extra units of electricity to power distributors.

House owners and farmers have now become owners of electricity factories, he said.

After the event, the prime minister visited the temple of goddess Modheshwari in Modhera town and performed darshan and pooja. He was accompanied by Gujarat Chief Minister Bhupendra Patel and state BJP chief C R Paatil.

Modi waved at the people standing along both sides of the road on his way to the temple.
The projects dedicated to the nation by the prime minister include a gauge conversion project, ONGC’s Nandasan geological oil production project, an irrigation canal project, road projects, and a building of a regional training centre for Sardar Patel Institute of Public Administration (SPIPA), among others.

He also laid the foundation stone for a new automated milk powder plant and UHT milk carton plant at Dudhsagar Dairy, redevelopment and reconstruction of a government hospital in Mehsana, etc.

NDTV – Dettol have been working towards a clean and healthy India since 2014 via the Banega Swachh India initiative, which is helmed by Campaign Ambassador Amitabh Bachchan. The campaign aims to highlight the inter-dependency of humans and the environment, and of humans on one another with the focus on One Health, One Planet, One Future – Leaving No One Behind. It stresses on the need to take care of, and consider, everyone’s health in India – especially vulnerable communities – the LGBTQ population, indigenous people, India’s different tribes, ethnic and linguistic minorities, people with disabilities, migrants, geographically remote populations, gender and sexual minorities. In wake of the current COVID-19 pandemic, the need for WASH (Water, Sanitation and Hygiene) is reaffirmed as handwashing is one of the ways to prevent Coronavirus infection and other diseases. The campaign will continue to raise awareness on the same along with focussing on the importance of nutrition and healthcare for women and children, fight malnutrition, mental wellbeing, self care, science and health, adolescent health & gender awareness. Along with the health of people, the campaign has realised the need to also take care of the health of the eco-system. Our environment is fragile due to human activity, which is not only over-exploiting available resources, but also generating immense pollution as a result of using and extracting those resources. The imbalance has also led to immense biodiversity loss that has caused one of the biggest threats to human survival – climate change. It has now been described as a “code red for humanity.” The campaign will continue to cover issues like air pollution, waste management, plastic ban, manual scavenging and sanitation workers and menstrual hygiene. Banega Swasth India will also be taking forward the dream of Swasth Bharat, the campaign feels that only a Swachh or clean India where toilets are used and open defecation free (ODF) status achieved as part of the Swachh Bharat Abhiyan launched by Prime Minister Narendra Modi in 2014, can eradicate diseases like diahorrea and the country can become a Swasth or hea

Mother’s Consumption Of Ultra-Processed Foods Linked To Risk Of Obesity In Children: Study

Schizophrenia May Increase Risk Of Alzheimer By 2.5 Times: Study