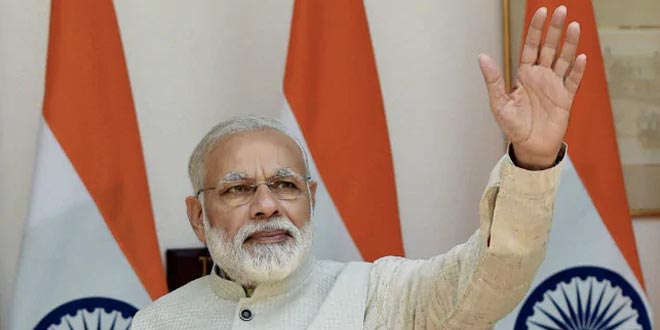 New Delhi: As India marks National Girl Child Day on January 24, Prime Minister Narendra Modi took to his social media to extend greetings for the day. In a series of two tweets he said,

National Girl Child Day is an occasion to reiterate our commitment and further strengthen ongoing efforts to empower the girl child. It is also a day to celebrate the exemplary accomplishments of the girl child in different fields.

National Girl Child Day is an occasion to reiterate our commitment and further strengthen ongoing efforts to empower the girl child. It is also a day to celebrate the exemplary accomplishments of the girl child in different fields.

Further talking about the initiatives taken by the government to empower girl child in India, he added,

In every development initiative undertaken by our Government, we accord immense priority to empowering the girl child and strengthening our Nari Shakti. Our focus is on ensuring dignity as well as opportunities to the girl child.

In every development initiative undertaken by our Government, we accord immense priority to empowering the girl child and strengthening our Nari Shakti. Our focus is on ensuring dignity as well as opportunities to the girl child.

India has been celebrating the National Girl Child Day since 2008. It is an initiative of the Ministry of Women and Child Development that is marked in the country with the objective of highlighting the inequalities faced by girls and promoting awareness about the rights of a girl child and the importance of their education, health, and nutrition.

Why The Day Holds So Much Importance?

According to UNICEF, India is the only large country in the world where more baby girls die than baby boys. It further states that the gender differential in child survival is currently 11 per cent. The statistics reflect community attitudes with fewer hospital admissions for girls than boys, showing that parents sometimes give less attention to newborn girls. In 2017 alone 1,50,000 fewer girls were admitted to Special Newborn Care Units (SNCUs) than boys.

Apart from this, the latest edition of the National Family Health Survey 5 highlights the gender disparity. According to data, 71.5 per cent of women (15-49 years) are literate whereas, in comparison of 84.4 per cent of men in the country, who are literate.