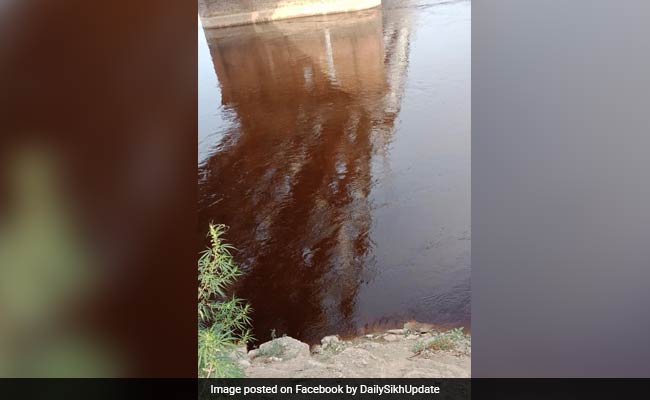 New Delhi: Beas, one of the five rivers of Punjab which supports agriculture, hydro-power generation and serves as a source of water to cities like Amritsar, Gurdaspur, Pathankot and other towns and villages, has presently become a hotbed of water pollution. Countless fish and other aquatic animals have been found dead in the Beas River on May 17 due to the contamination of water caused by the release of molasses (a byproduct in sugarcane processing) from a sugar mill situated on its shore at Kiri Afghana village in Gurdaspur district. People living along the river and the farmers using the river banks for agricultural purposes noted the river’s colour had turned rust brown and a large number of dead fish were floating in the river, releasing sickening stench.

Officials, including Deputy Commissioner of Amritsar Kamaldeep Singh Sangha, and experts from the Punjab Pollution Control Board (PPCB) and wildlife department visited the sites to take stock of the situation.

According to the experts from the Punjab Pollution Control Board (PPCB), the fish died after the molasses (a viscous product resulting from refining sugarcane or sugar beets into sugar) from a sugar factory leaked into the river through a creek and it then changed the colour of the river water to rust brown.

As per our preliminary analysis, we have figured out that there was a blast in the boiler of the sugar mill when they were preparing molasses in it. It resulted into leakage of molasses into the river water. When molasses got mixed with the river water, the biochemical oxygen demand (BOD) of water decreased that reduced the oxygen levels, which ultimately led to the death of fish and other water animals. As part of the investigation process, we have collected the water samples and are getting it tested at Ludhiana’s Punjab Agricultural University and Guru Angad Dev Veterinary and Animal Sciences University to ascertain if something else may also have been there, said Kamaldeep Singh Sangha, Deputy Commissioner, Amritsar.

Talking to NDTV about the measures being taken to prevent the further damage to aquatic life, the district commissioner said:

It was feared that the molasses may have spread to 30-35 km of river water area. We have plugged the leakage of molasses and released water from the Pathankot’s Ranjit Sagar Dam into the river Beas to flush out the pollutants. With the release of the fresh water, the situation is much better now.

Amritsar: Several fish in Beas river died after blast in a sugar factory, leaked molasses into a creak which merges with the river. Dy Commissioner says 'Biochemical oxygen demand(BOD) of water decreased reducing availability of oxygen. Leakage plugged,ordered for closure of mill pic.twitter.com/7OyuwLJ2cl

The deputy commissioners of the affected districts have issued an advisory asking the residents not to eat or sell the dead fish and serve the river water to cattle for drinking, and stop bathing in the river.

When asked about the action being taken by the administration against the factory and to mitigate the crisis situation, the Chairman of Punjab Pollution Control Board, Kahan Singh Pannu said:

We have ordered the closure of the factory and an enquiry has been initiated wherein chief engineers are looking into the matter in detail. We will identify whether the release of molasses in the river was accidental or it was done intentionally. Besides sealing, the sugar mill has been charged a fine of Rs. 25 lakh for this negligence.

There is a growing concern being raised by environmentalists over the pollution of rivers. Balbir Singh Seechewal, an environmental activist also known as Eco Baba, who resurrected the 110-miles long Kali Bein rivulet (160 km long tributary of Beas in Doaba region of Punjab), referred to fish dying in Beas River as a big disaster. “Whether in marine or fresh water, fish require suitable habitat, unadulterated food and adequate oxygen to survive. Any sort of element, whether chemical or natural, that upsets this balance is considered as water pollution and it should be stopped,” he added.

Also Read: Ganga Pollution: Perception That ‘Nothing Significant’ Being Done To Clean Ganga Is Not Correct, 80% Ganga To Be Clean By March 2019, Says Nitin Gadkari