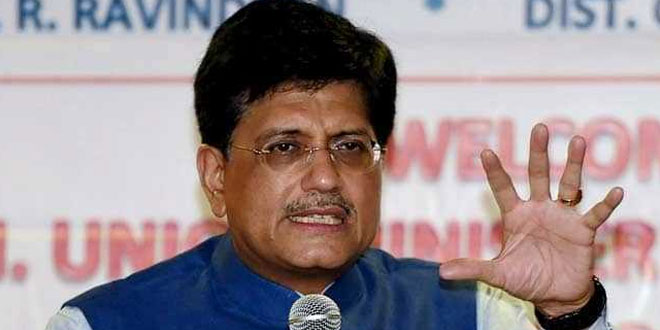 New Delhi: After inaugurating Indian Tourism Mart, a symposium of the travel and trade industry sector, Railway Minister Piyush Goyal flagged the areas of concern for tourists visiting the country such as electricity, cleanliness and pollution. “No country can attract international tourists, until they feel the country is clean. The efforts we have undertaken in the last four years to bring about cleanliness is certainly going to be one of the defining features to promote tourism in the nation in a big way,” he said.

He said cleanliness also makes tourists feel safer when they walk around streets without garbage and muck littering their paths. He said that electricity will be available across the country, even in the remotest areas, as the country has “gone from an era of power shortages to an era of power surpluses. We can now provide power to even the most remote areas, and tourists can be assured about this.”

“I think giving electricity access to the entirety of the country was very important to give confidence and comfort to all our tourists, both domestic and international, that India is a safe country. You can come here and you will have availability of electricity,” said the Railway Minister.

He further said that the government has fast-tracked the country’s connectivity mission and effort to connect the remotest parts of India with efficient modes of transport is ongoing. “Very recently, we have significantly reduced the pricing of luxury trains to encourage more and more tourists to travel in these trains to see and explore the beauty of our nation.

“I would like to urge all of you to crowd-source ideas and help us with newer initiatives to help us to meet the ambitious targets we have set for the tourism industry,” said Mr. Piyush Goyal, adding that the growth in tourism will also generate jobs. Tourism brings about several entrepreneurial and business opportunities, sometimes as simple as translators, he said, adding that more focus needed to be given on providing facilities and attracting high-spending international tourists.

Tourism Minister K J Alphons said that his ministry was focusing on building infrastructure for the sector and said that by 2020, India will become the third largest aviation hub in the world, thus bringing in tourists in larger numbers. He said the tourism and hospitality industry is one of the fastest growing sectors, which contribute 6.88 per cent to the GDP. He said India is one of the fastest growing tourism destinations in the world. Mr. Alphons said that one of the biggest decisions taken by the government to make a tourist feel welcome was simplification of the visa system. He said that the tourism mart would provide a great platform for states that do not have their own marts.