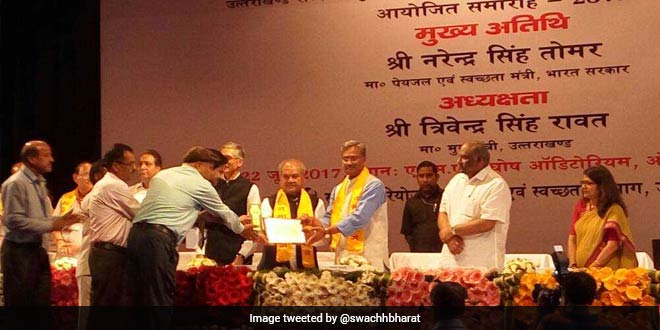 Under the Namami Gange initiative to clean river Ganga all 131 villages located near the banks of river have also been declared ODF.

To celebrate this milestone, the state government organised a day long programme at ONGC Academy in Dehradun today. The ODF certificate was handed over by the Param Iyer, Secretary Ministry of Drinking Water and Sanitation at the event.

The programme kickstarted with a Swachhta exhibition which showcased various techniques of waste management adopted by the state government. Present at the event were Chief Minister of Uttarakhand Trivendra S Rawat, Secretary Ministry of Drinking Water and Sanitation Param Iyer and Union Minister Narendra Singh Tomar.

Congratulations to Uttarakhand for becoming the 4th state in India to become ODF! @swachhbharat @nstomar pic.twitter.com/7btEL9C8yF

Chief Minister Rawat dedicated the success of ODF in rural areas to the people and said, “Community participation has played a huge role in making rural areas free from open defecation. I would like to specially thank the heads of village who are the reals heroes.”

As the chief minister declared rural Uttarakhand ODF today, the urban part is expected to go ODF by end of this fiscal year as confirmed by Chief Minister Rawat in a tweet.

“I declare, here today that after rural Uttarakhand, the government will make urban Uttarakhand ODF by end of this fiscal year,”

Gram Pradhan from Rudraprayag district talked about various activities that were undertaken to make his village ODF, “After Prime Minister launched the Swachh Bharat Mission, I started cleanliness drive with renewed vigor in my village,” he said.

The director of State Water and Sanitation Mission further said that after achieving ODF status, the next target for gram panchayats is to focus on Solid Waste Management, “After achieving #ODF status 2 years ahead of 2019, GPs in Uttarakhand are focussing on SLWM.”