New Delhi: In December 2018, for the first time, the west zone of the South Delhi Municipal Corporation (SDMC) asked residents of Tagore Garden to utilise their wet waste which majorly includes kitchen waste by composting it. The municipal corporation has been encouraging residents to segregate their waste at a household level and maintain two bins – green for wet waste and blue for dry waste. The SDMC even asked the residents to practice composting at home – on their roof or in balcony using plastic composting drums with aerating holes.

While some people agreed to do composting at home, others complained of lack of space at their premises. This is the reason, we asked them to collect it separately and give it to us, said Radha Krishan, Director, Press and Information, SDMC, while speaking to NDTV. 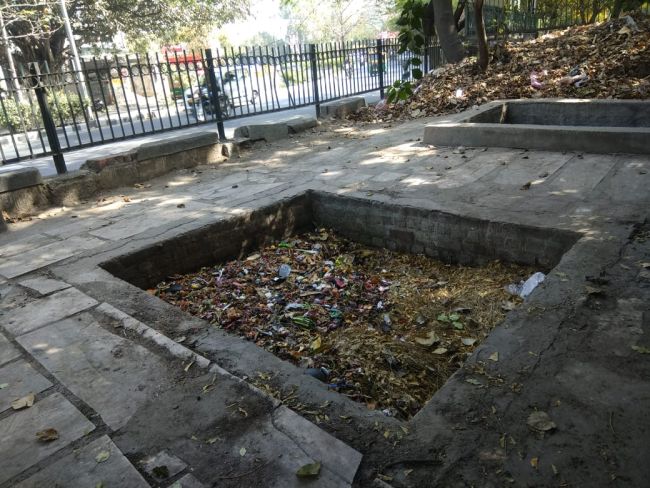 Compost pit inside a housing society for wet waste management

This way, SDMC collected 50 tonnes of green waste or organic waste from resident welfare associations (RWAs). The collected waste was dumped at SDMC composting pits near Fixed Compactor Transfer (FCT) Stations. Over a period of three to four months, with simple sun drying and regular upturning of waste, SDMC got one tonne of rich manure.

On Monday (April 8), the process got completed and for the first time, the west zone of SDMC distributed compost in brown paper bags for free as part of their newly introduced campaign ‘Geela Kooda Lao Aur Khaad Le Jao (Get your organic waste, take compost for free)’. The compost was given to any and every local resident who is interested in using it for the purpose of gardening.

I and my wife both are working and honestly we don’t have enough time to do composting at home, but we do practice waste segregating at source. We simply give wet waste to SDMC waste collector. Recently, we got compost from and we will be using it in a couple of plants we have at our place, says Suresh Bhasin, one of the residents.

Also Read: Waste To Wonder: All About Delhi’s New Theme Park ‘Seven Wonders Of The World’

“This is the first time we have completed the cycle of taking wet waste from residents, converting it into compost and giving it back to citizens for free. By this exercise, the total volume of garbage has been reduced by 70 per cent, resulting in lesser burden at landfill site”, informed Mr Krishan.

After the success of the first cycle, the SDMC plans to implement it in other localities.

Related Topics:
Composting Delhi
Up Next