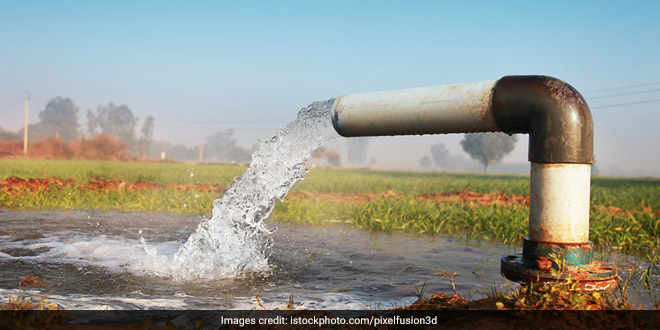 New Delhi: India’s northern and eastern states saw a rapid decline in usable groundwater between 2005 and 2013, raising an impending risk of severe droughts, food crisis, and drinking water scarcity for millions of people, researchers have found. A team from the Indian Institute of Technology (IIT) Kharagpur, West Bengal and Athabasca University, Canada, compiled the first estimates of usable groundwater storage (UGWS) at the state-level across all of India using both in situ and satellite-based measurements. Groundwater-level data was used from 3,907 in situ monitoring wells across the country and the total UGWS was estimated between 2005 and 2013.

The estimate shows rapid depletion of UGWS in Assam, Punjab, Haryana, Uttar Pradesh, Bihar, and West Bengal. In these areas, increases in agricultural food productions have resulted at the cost of non-renewable loss in groundwater volume at an alarming rate, the researchers wrote in the study published in the journal Advances in Water Resources.

On the other hand, southern and western Indian states like Andhra Pradesh, Maharashtra, Gujarat, Chattisgarh show replenishing usable groundwater storage trends. Earlier works by the government agencies have only been able to estimate the total groundwater, only a part of which is usable for human purposes, said lead researcher Abhijit Mukherjee, Associate Professor Hydrogeology, Department of Geology and Geophysics, IIT Kharagpur. Mr. Mukherjee told PTI,

He emphasised that more than 85 per cent of the groundwater usage in India is linked with irrigation abstraction practices. India is the largest user of groundwater in the world. It uses an estimated 230 km3 of groundwater per year, over a quarter of the global total. Groundwater being an essential natural resource for irrigational water supply during non-monsoonal months, large-scale depletion could have unforeseen consequences in future food security, said Mr. Mukherjee.

“Underground water is definitely declining in Rajasthan at faster rate. There are pockets in UP which have seen a dip in groundwater table as well,” agreed Dr N C Ghosh, former Head of Hydrology, National Institute of Hydrology (NIH), Roorkee, who was not involved in the study.
The problem, Dr. Ghosh said, is compounded by over-exploitation of the ground water.

Mr. Mukherjee noted that rapid depletion in UGWS would accelerate the decline in food production and availability of drinking water, two of the prime goals of achieving UN Sustainable Development Goals 2030. He said,

More than 120 million people would get affected only in the Gangetic states.

The study combined borehole data from Central Ground Water Board, rainfall data and satellite data from NASA’s Gravity Recovery and Climate Experiment (GRACE), a pair of satellites launched in 2002. A northeastern state like Assam, which was regarded always as water-affluent, has lost two per cent of its usable groundwater resource, and is at the brink of suffering drought and famine in impending years, said researchers, including first author Soumendra N Bhanja from Department of Geology and Geophysics, IIT Kharagpur.

Haryana, which gets an annual precipitation of 689 millimetres (mm), holds the highest levels of usable groundwater with 3,593 centimeters (cm) while Himachal Pradesh with a precipitation of 1,147 mm per year has the lowest UGWS level of 520 cm.

Assam and some parts of eastern India seems to be losing the usable groundwater storage at the highest rate, within the study period, the researchers found. Subsequently, many of these states are now intermittently getting affected by the “groundwater drought” in recent summers. Said Mr. Mukherjee,

Our prediction suggests that these summer groundwater droughts would intensify in recent future years, to become severe to very severe by 2050, with possibility of spread over all seasons.

These depletion trends and practices, he noted, have not only affected the groundwater storage but also declined the flow in the adjoining rivers, including Ganga, leading to its summer drying in recent years. Researchers said the depletion is positively linked with the increased cropping practice of water intensive crops in these states and not necessarily related to change in rainfall patterns. Dr. Ghosh added,

Definitely there is huge pressure on groundwater and river flow of several rivers has also decreased. As a result river-aquifer interaction has been influenced. Wherever there is lack of organised water supply, the dependence on groundwater is high.

We need to develop a much robust quantitative approach, possibly with help of advanced hydroscience and data science techniques to understand the conjunctive water demands and usage.

#BeatPlasticPollution: Goa Government To Eliminate Production And Usage Of Single-Use Plastic By September