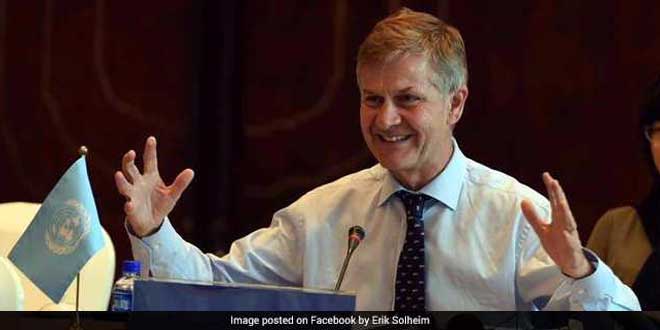 New Delhi: There’s no magic solution to the smog problem in the Indian capital as it’s caused by a variety of factors, United Nations Environment head Erik Solheim has said, adding:

The key here is providing clear, decisive leadership on the issue.

It’s the same in New Delhi, Manchester, London, Beijing or Nairobi. Citizens and politicians have to breathe the same air. It’s possible to build a strong consensus for action to opt for low-carbon solutions.

Delhi’s smog problem is caused by a variety of factors. These range from agricultural burning, the burning of waste, transport, construction and power generation, among others, Mr Solheim told IANS in an online interview from Nairobi, which is hosting the UN Environment Assembly next week.

He said the priority is really to establish a scientific basis for action, using air quality monitoring technology to identify the precise sources of pollution.

Policymakers can then use that data to prioritise areas of action and plan future change. The key here is providing clear, decisive leadership on the issue. Given the public health concerns, anyone taking firm action can be sure of winning public support, he observed.

Ahead of the third session of the UN Environment Assembly, where world leaders are gathering for the largest global meeting on pollution, an optimistic Mr Solheim said there’s a need for action on transport to curb emissions.

Transport accounts for nearly 18 per cent of all emissions worldwide, and over 90 per cent of the sector is still dependent on carbon-intensive fossil fuels.

We need action on transport for two reasons. The transport sector, be it on land, in the air or at sea, is a major contributor to emissions and a driver of climate change. It’s also a big cause of pollution, with an immediate detrimental impact on the health of hundreds of millions of people, Mr Solheim said.

We have started to see a shift to low-carbon solutions, but this needs to speed up. I’m convinced that the days are numbered for the internal combustion engine, with many nations now committing themselves to a time-bound phase-out of petrol and diesel vehicles, he said.

“But we really need to see more innovation and change in the air transport and shipping sectors.”

The UN Environment Assembly, with 193 nations as its members, aims to deliver commitments to end the pollution of air, land, waterways and oceans and to safely manage chemicals and waste.

According to Mr Solheim, what’s happening in many cities around the world is criminal, and people deserve far better.

Living in a city should not mean being condemned to poor health and an early death. On the positive side, both policymakers and citizens are increasingly aware of the issue, and especially the costs to health, to productivity and to the environment.

“It’s possible to build a strong consensus for action. The benefit here is that action on tackling poor air quality in cities is also a big part of the action we need to take on climate change,” he said.

On stepping up action to fight oceanic pollution, he said: “Beach clean-up initiatives are fantastic because they are a very useful tool to highlight the sheer scale of the problem and they help galvanise public support for change.

But ultimately, we have to stop plastics getting into the oceans in the first place. For this we need stronger political leadership on the issue. Better waste management, incentives for recycling and producers taking more responsibility for where their products end up.

Mr Solheim, an admirer of Indian lawyer Afroz Shah’s commitment and passion for clean seas, says his model of cleaning beaches can be replicated for the rest of the world.

China and India are both undergoing extraordinary change, and the shift to renewables in both the countries has been one of the most promising trends of recent years.

I’m convinced that both nations will emerge as global energy leaders if they continue on this path, said Mr Solheim, who recently tried out one of the bicycles delivered by Mobike that will be available for delegates to move around during the UN Environment Assembly.

He believes the bike aims to provide affordable and clean transport solutions for the cities.

Open Defecation In The ODF City Of Visakhapatnam To Attract Fines Of Up To Rs 300, Says City Municipal Corporation