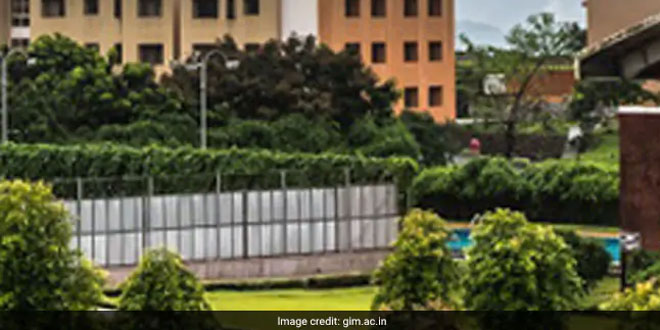 Panaji: With water crisis having become an annual phenomenon in Goa, the Goa Institute of Management (GIM) plans to install a chain of recharge wells on its 50-acre campus located atop a rocky plateau in Sanquelim village in North Goa. The recharge wells are the winning idea of GIM’s in-house ‘Sustainability Hackathon’ on water conservation and waste management practices.

The ideas suggested by the students are merit-worthy. We presently have a rain water harvesting pond, which recharges the water table. To recharge the borewells and aquifers, we have appointed a technical consultant, but we are also including the suggestions given by the students, Institute Director Prof. Ajit Parulekar told IANS.

The prize-winning team of the Hackathon, comprising Radhika Kulkarni, Vedanshi Tulshyan, Rashi Sharma, Nirmalkumar Rathi and Vishalkumar Bankar, had proposed a plan to install recharge wells on the campus, which would effectively utilise its water resources and replenish aquifers.

The recharging of ground water using latest cost-effective harvesting techniques and effective water management systems will not only help the campus, but will also benefit the surrounding areas.

The GIM’s plan is in sync with Chief Minister Pramod Sawant’s efforts to prioritise water harvesting and management in Goa, after the state faced severe water shortage in the run up to the monsoon, which was delayed this year.

Prof. Parulekar said the Sustainability Hackathon was an initiative of the Institute’s Centre for Sustainability, which was started a year ago to look into implementing sustainable efforts on the campus and research on sustainability across India.

Implementation of sustainability and water conservation strategies on the campus have already managed to save over 5,000 litres of water per day, by plugging the leakages and introducing new technology and minor changes to the existing water consumption systems, he said.

Other measures, included using aerators in water faucets, changing the flushing system and using water-less urinals. As a result of that we are able to save 5,300 litres of water per day, and over a million litres of water per year, Prof. Parulekar said.

He said the Institute was also looking for vendors to set up solar powered generators that would meet the B-school’s around one third electricity consumption requirements.

It was trying to cut down on indiscriminate use of paper and plastic articles. “But it’s impossible to envision an institute going paperless in the near future. However some of the solutions offered by the students are merit worthy. We are trying to put in a system, which will significantly reduce the use of paper,” he said.

We have already done away with the use of disposable plastic bottles and replaced it with glass reusable bottles. We discourage the use of single use disposable plastic cups, plates and cutlery. Currently, we are treating wet waste on the campus using vermi-compost and adopt four-way segregation across the campus, the Director added.

Also Read: Hotels Owned By Goa Tourism To Ban Single-Use-Plastic To Meet The State’s Goal Of Going Plastic Free By 2022

Stop Littering: Use A Dustbin, It will Feel Good, Says Actor Kangana Ranaut