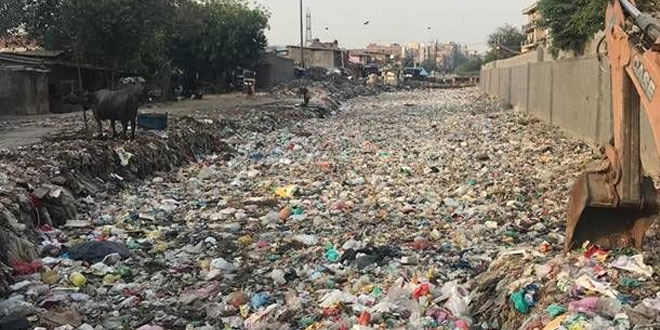 New Delhi: The central government’s Department of Biotechnology has collected over 500 tonnes of plastic waste in three months with the help of small pilot projects at Barapullah and Babarpur drains, officials informed Delhi Lieutenant Governor Anil Baijal on Friday (August 23). At a meeting with Principal Scientific Advisor professor K Vijay Raghavan, Department of Biotechnology, experts from the IIT-Delhi, representative of DESMI, Denmark, and officers of municipal corporations of Delhi, Mr Baijal discussed the possible solutions for cleaning of drains and remediating legacy waste (wastes that piled up for several years at the dumping yards) in the city.

DESMI is a manufacturer of pump solutions for marine, industry, oil spill combating, defence and fuel and utility. “It was informed to the LG that with the small pilot projects at Barapullah and Babarpur drains, the DBT has been able to collect over 500 tonnes of plastic waste in three months,” a statement from the LG House said.

These beginnings are very heart warming and open wider opportunity to clear other drains of Delhi to realize the dream of a clean Yamuna. Replication of these solutions will definitely clear the drains and lead to transformation in community living around these drains, it said.

Mr Baijal lauded the office of the Principal Scientific Advisor, IIT-Delhi and Department of Biotechnology for their sustained efforts and continued innovations to help clean Delhi.

It is also very encouraging to learn about huge response from global experts for legacy waste remediation at Ghazipur. Concerted efforts from all stakeholders will pave way for cleaner and greener Delhi, the statement quoted him as saying.