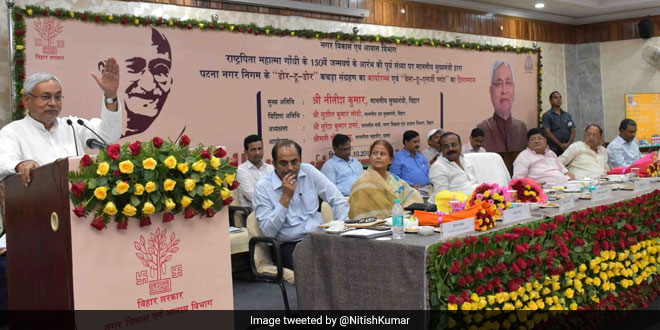 New Delhi: “Let us take a pledge to make the state open defecation free (ODF) before October 2, 2019. Work is also in progress to make clean drinking water available to every nook and corner within two years. 90 per cent of the diseases can be kept at bay if proper sanitation and clean drinking water are ensured,” said Bihar Chief Minister Nitish Kumar, speaking at a function on the eve of Mahatma Gandhi’s 149th birth anniversary. The Chief Minister called for combined efforts to make the entire state ODF and achieve the target before the national deadline.

In the year 2014, when government launched Swachh Bharat Abhiyan, Bihar’s rural sanitation coverage was languishing at 21.61 per cent. For the first three years, the state showed little to no progress in terms of sanitation. Until 2017, the sanitation coverage rose to only 26.36 per cent, but today it stands at 73.37 per cent. In one year, the state doubled the number of toilets constructed to over 48 lakh toilets and it gives hope to other states grappling with the similar issues.

Lack of awareness among people was the reason why Bihar was lagging. But Sitamarhi’s model of gaining and utilising local support is the only way other districts of Bihar can attain ODF status for the state to meet the national ODF deadline of October 2, 2019. Today a handful of districts are ODF, but gradually, more people are participating in toilet building process, and simultaneously, we too are seeing Bihar progress towards becoming ODF, says Ranjit Kumar Singh, District Magistrate, Sitamarhi.

Also Read: After A Slow Start, Not One, Two But Three Districts In Bihar Are Now Open Defecation Free

Till today, five districts of the state – Sitamarhi, Sheikhpura, Rohtas, Nalanda and Munger have achieved ODF status. Apart from the five ODF districts, 13 other districts have sanitation coverage of above 65 per cent and are slated to become ODF by the end of this year, says the state’s sanitation coordinator.

If compared this with last year, when Bihar had no ODF districts and only four districts had sanitation coverage above 65 per cent, the pace of Swachh Bharat Abhiyan has certainly picked up momentum in the state.

To phase out the use of hazardous plastic bags, the state has decided to put a blanket ban on plastic bags, irrespective of their thickness. While urban areas of Bihar will reel under the ban from October 25, rural areas will witness the ban from November 25 this year, the state government informed the Patna High Court on October 1.

Noting that the consumption of plastic bags leads to stray cattle falling sick and dying, the Chief Minister asked the district administration to ensure no cow is found roaming on the roads, unattended. If found they should be herded to cow shelters and owners should be fined for their negligence.

In a bid to ensure effective waste management in the state, the Chief Minister laid the foundation stone for a waste-to-energy plant and flagged off 150 vehicles for door-to-door garbage collection. As informed by the minister, the waste-to-energy plant will be functional in a year, under the guidance of an American company. Along with this, the urban development department has made arrangements for segregation of waste.