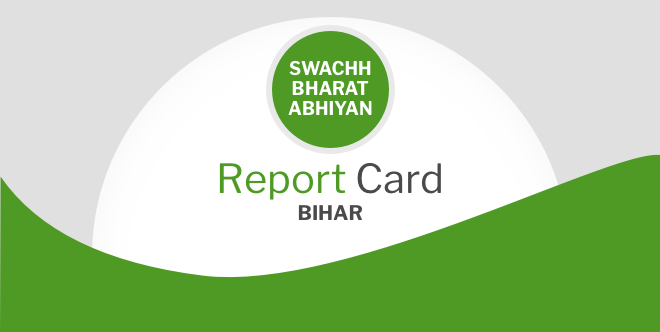 New Delhi: Bihar’s struggle to shrug off the BIMARU tag continues. A term coined in the 80s, BIMARU referred to India’s economically most backward states – Bihar, Madhya Pradesh, Rajasthan and Uttar Pradesh still holds. Three decades later Bihar continues to continues to lag behind other states on most accounts, particularly stark was its lacklustre performance in the first three years of the current government’s flagship sanitation programme – Swachh Bharat Abhiyan. After three years not a single district of the state had been declared open defecation free (ODF).

Till October 2017, Bihar had poor sanitation coverage of 32.35 per cent, despite 21 lakh household toilets being built across rural Bihar in the first three years of the Abhiyan. The state government had prioritised sanitation, but failed to make much progress at ground level, where access to household toilets across rural and urban Bihar remained low. However, since October 2017 Bihar has witnessed a turnaround in its sanitation landscape. The state doubled the number of toilets constructed to over 40 lakhs and its sanitation coverage in rural areas improved to 65.44 per cent.

The state’s sanitation coverage was little over 30 per cent last year, and several districts were falling back in not only constructing toilets but carrying over the message of Swachh Bharat Abhiyan to people. Once districts successfully started to convey the message of safe sanitation to people via awareness camps, rallies and door-to-door promotions, it became easier to bring them onboard. Therefore, construction has increased in the past one year, said Rajiv Kumar Singh, State Coordinator for Swachh Bharat Rural, Bihar. 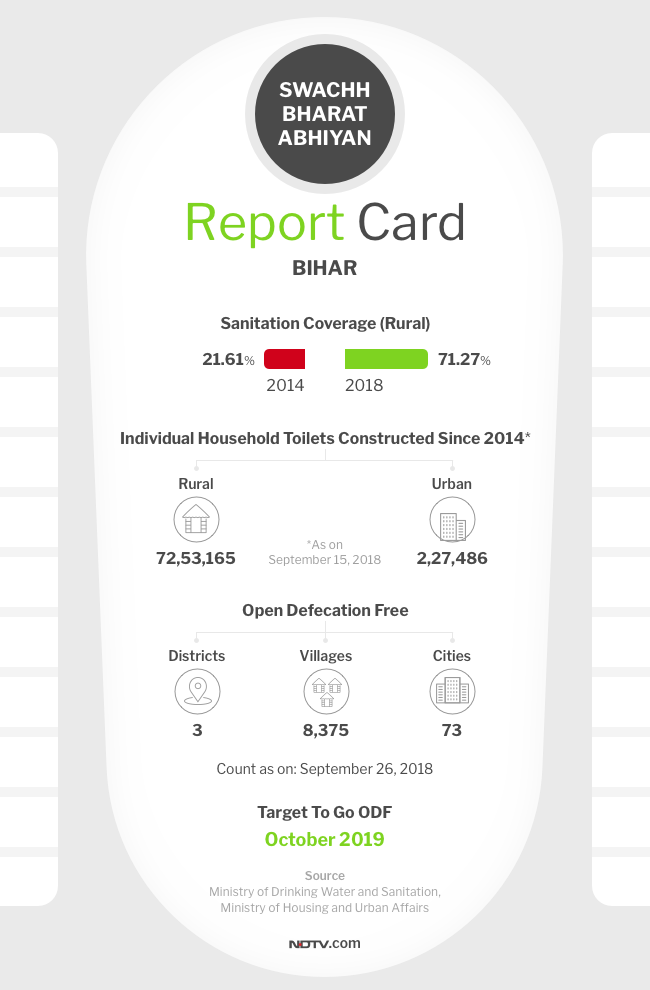 If district Sitamarhi’s ODF journey is taken as an example, then awareness campaigns arranged by the district administration were what altered the district’s sanitation scenario. Swachhagrahis or sanitation volunteers comprising local school children, NGO members and Anganwadi workers visited households with no toilets and explained to them in detail how the government will help them financially to construct toilets in their households. A similar campaign of making people understand how the Swachh Bharat Abhiyan works was also undertaken in the districts of Rohtas and Sheikhpura, which have now become Bihar’s second and third ODF districts. Sitamarhi is already planning to achieve the ODF plus status which aims to improve solid liquid waste management and waste collection by next year, and has banned plastic to improve waste management in the district.

Also Read: After A Slow Start, Not One, Two But Three Districts In Bihar Are Now Open Defecation Free

“The Sitamarhi model of gaining and utilising local support is the only way other districts of Bihar can attain ODF status for the state to meet the national ODF deadline of October 2, 2019. Several other districts have begun to implement a similar model of taking locals into confidence and working along with them. Lack of awareness among people was the reason why Bihar was lagging. Gradually, more people are participating in toilet building processes, and simultaneously, we too are seeing Bihar progress towards becoming ODF,” said Ranjit Kumar Singh, District Magistrate, Sitamarhi.

Though there is still a long way to go, Bihar’s improvement in sanitation coverage is praise worthy. Within a year, the rural sanitation coverage of the state has doubled, and the state has managed to build more toilets this year than the last three years combined. The administration should work to keep up this pace of toilet construction and ensure that people use the toilets regularly, said Anoop Jain, founder of the NGO Sanitation and Human Rights in India (SHRI), which has worked extensively in Bihar.

The sanitation scenario in urban Bihar has not improved as much as its rural counterpart. At 47 per cent sanitation coverage, urban Bihar remains a poor performer. Of the required 15 lakh individual household toilets needed, only little over 2 lakh (2,27,486) have been constructed in Bihar’s cities so far. Only 5,900 public and community toilets have been constructed in the last four years and open defecation is rampant in some of the major cities like Patna, Gaya and Bhagalpur. Patna, which is slated to become a smart city by 2025, has shown minor progress in eradicating open defecation as it recently declared just 18 of its 75 wards as ODF. The other cities too continue to struggle to make progress on the sanitation coverage front. 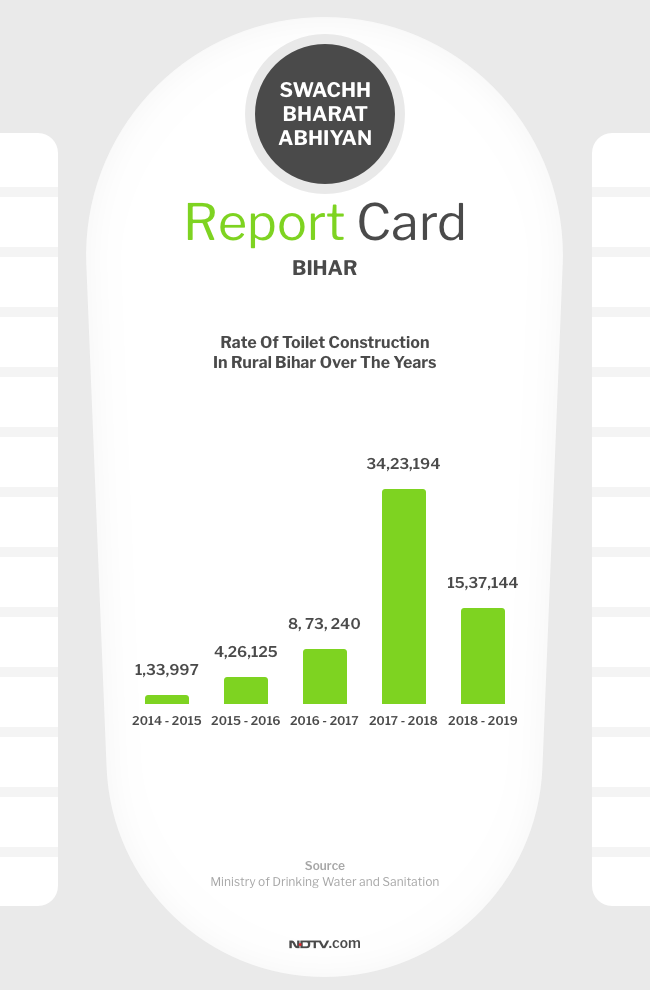 “We are concentrating more on building more public and community toilets in major cities as many households have no space for individual toilets. In some cities like Bhagalpur and Gaya, municipal bodies have issued notices to public spaces like malls and petrol pumps to provide access to their toilets to people to reduce open defecation. By the March next year, we plan to build at least 5 lakh individual household toilets and 400 public toilets in Bihar’s urban areas,” said Chaitanya Prasad, Principal Secretary, Urban Development Department, Bihar.

The improvement seen since 2017 in rural Bihar’s sanitation scenario has given the state enough confidence to bring forward its deadline for achieving Swachh Bharat Abhiyan’s goals to March instead of the scheduled deadline to go ODF by October 2, 2019. From digging up over 50,000 toilet pits in a day in Sitamarhi to over 22 lakh people participating in a hand washing programme, Bihar owes everything to its people for the acceleration it has witnessed in the past one year. Now all that Bihar needs to do is to hold on to this momentum of toilet construction and carry it forward to become totally open defecation free state.

After Urban Areas, It Is Time For Rural Areas Of Madhya Pradesh To Go Open Defecation Free On October 2