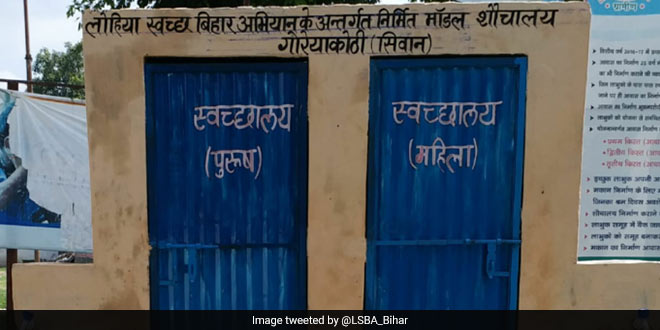 New Delhi: From no open defecation free (ODF) district till last year to three ODF districts out of 38 now – Bihar is finally making some headway in improving its rural sanitation. The state with least progress made under the first three years of Swachh Bharat Abhiyan is finally stepping up and has begun constructing toilets at a rapid pace. After Sitamarhi became ODF in July, two more districts, namely Sheikhpura and Rohtas have joined the list of ODF districts, taking the total number of ODF districts in Bihar to three. Both the districts were declared ODF earlier this month, and has accelerated Bihar’s journey in Swachh Bharat Abhiyan.

Rohtas has built close to 3 lakhs (2,78,000) toilets since October 2014. Sheikhpura, a relatively smaller district has completed the construction of over 68,000 toilets to attain its ODF status. Rohtas had sanitation coverage of 35 per cent in 2016-17 and Sheikhpura had sanitation coverage of 44 per cent. Bihar’s languishing behind in the Swachh Bharat Abhiyan had become a cause of concern for both the state and the Centre and both Sheikhpura and Rohtas launched extensive sanitation campaigns last year to accelerate the rate of toilet construction in the districts.

In June 2017, we launched an all-round awareness campaign in Rohtas, focusing on construction of toilets. Open defecation was rampant, and so were diseases like diarrhoea. People had limited knowledge of the Swachh Bharat Abhiyan and were not well-versed with some of the most important aspects of the campaign, especially the assistance of Rs 12,000 provided per household toilet by the Centre. We engaged in a door-to-door campaigning and explained to people that all assistance will be provided to help them construct toilets, said Pankaj Dixit, District Collector, Rohtas.

The district administration roped in Anganwadi workers and school children, choosing sanitation ambassadors from both these sections, who then accompanied district officials in convincing people to build toilets. Local support in digging pits and building toilets further accelerated the process, resulting in Rohtas witnessing the construction of over one lakh toilets within a year.

Sheikhpura also launched a similar awareness campaign earlier this year. NGOs from neighbouring districts came together to conduct awareness campaigns and rallies across the district. Over 35,000 toilets were built in the last six months, effectively covering all the households in the district. The district is now also strengthening its solid-liquid waste management infrastructure, and aiming to secure the ODF plus status.

While the national deadline for becoming ODF is October 2019, Bihar is aiming to complete most of the toilet construction by December this year. The state aims to achieve ODF status for itself by March 2019 and plans to spend the next six months in improving waste management mechanisms in its districts to make at least 50 per cent of them ODF plus before October 2019.

“We have overcome the initial lag associated with toilet building and are now moving ahead comfortably. Apart from the three ODF districts, two more districts of Nalanda and Munger are scheduled to go ODF soon as they have both attained sanitation coverage of over 90 per cent. We are confident that the remaining 30 districts which have sanitation coverage between 50 to 70 per cent will get ODF status by March next year,” said Arvind Kumar Chaudhary, Secretary, Rural Development, Bihar.