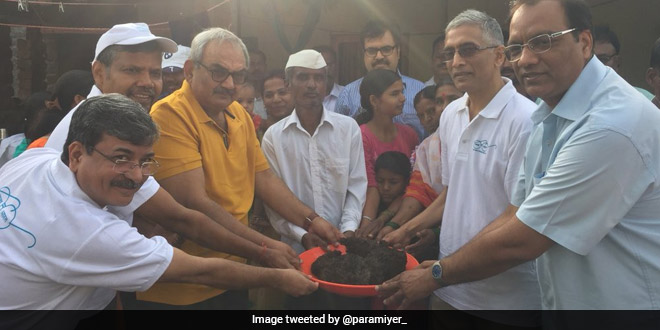 New Delhi: Ever since the Swachh Bharat Abhiyan began in October 2014, multiple experts have opined that construction of toilets alone will not solve India’s sanitation problem. From several misconceptions to stigmas attached to toilet usage in India, the problems related to sanitation are not merely technical in nature. The Swachh Bharat Abhiyan has increased India’s rural sanitation coverage to over 83 per cent from 38.70 per cent in 2014, and has managed to eradicate the stigmas associated with toilet usage or toilet presence in household premises. Comptroller and Auditor General Rajiv Mehrishi on May 17 climbed down a twin pit toilet in Pune’s Pandhrewadi village and emptied it with his bare hands and also held the compost in his bare hands. The act, four years into the Swachh Bharat Abhiyan, showed that no stigmas should be attached to sanitation and compost in itself was safe to handle.

Accompanying Mr Mehrishi was Parameswaran Iyer, Secretary, Ministry of Drinking Water and Sanitation. During the inception of Swachh Bharat Abhiyan, the concept of twin pit toilets was popularised for construction in rural areas. Twin pit toilets are easy to construct, affordable to maintain and turn human waste into compost naturally, which can be used later for agricultural purposes. The Swachh Bharat Abhiyan has always attempted to build a comprehensible cycle of safe sanitation where people can use toilets safely and the human waste is usable as well, after a few years. Unfortunately, social stigmas and myths surrounding toilets and compost had hindered the safe sanitation movement for decades, in India. In stepping into a toilet and dispelling the myth surrounding toilets and compost, Mr Mehrishi gave the Swachh Bharat Abhiyan a big boost.

A great privilege to have Mr Rajiv Mehrishi, CAG of India, join the @swachhbharat team on a toilet pit emptying exercise in Pandhrewadi village, 80 kms from Pune this morning. pic.twitter.com/qQuuEV9e7A

For years, sanitation in India’s villages had remained a topic of taboo, not to be spoken about inside the household. While many of India’s women continued to defecate in the open, awaiting sunrise or sunset to sneak out of their homes and relieve themselves, stigmas related to sanitation were responsible for the dire sanitation scenario across the country. As stigmas associated with sanitation are gradually eradicated today, actions like those of Mr Mehrishi and Mr Iyer will only strengthen the ground for sanitation to become a topic easier to talk about and work on, in the future.