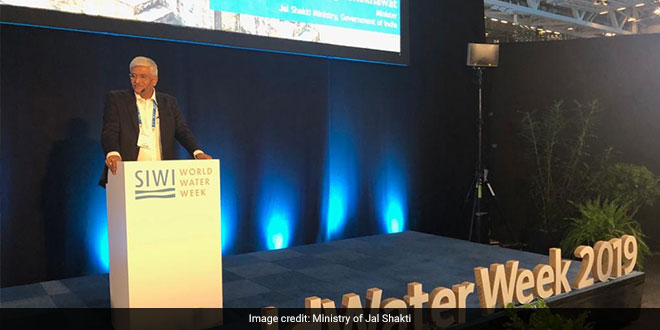 New Delhi: The National Mission for Clean Ganga (NMCG) will seek the help of foreign experts to develop a kind of environmental flow regime for river Ganga and its tributaries. Rajiv Ranjan Mishra, the Director-General of NMCG who recently returned after participating in the World Water Week 2019 in the Swedish capital Stockholm, said that he had interactions with many experts who have shown interest in visiting India and contributing for the conservation of holy Ganga and its tributaries.

“For the first time in our river rejuvenation history, we modified environmental flow for river Ganga last year. And, we are in the process of stabilizing it and are also doing a similar kind of process for other rivers also. So, India does not have much experience in environmental flow determination and it’s a new subject for us. And, we are getting into a new innovative area”, said Rajiv Ranjan Mishra. he said,

So, we had discussions with a number of global experts, who were present in the conference and then with the help of GIZ (Deutsche Gesellschaft Fur Internationale Zusammenarbeit), we are organizing Round Table in October in India. So, this World Water Week, there was a forum to interact with some of them.

“Some of them were prize winners and we invited them to India and many of them have accepted to come and deliberate with us to develop a kind of environmental flow regime and a kind of framework for us,” he added.

NMCG set up a pavilion in the World Water Week 2019 between August 25 and August 30, and successfully projected the massive size and diverse achievements and potential areas of collaboration and investment of the `Namami Gange’ mission.

Namami Gange is a major initiative of the government of India and perhaps the largest river rejuvenation programme in the country. Having so many dimensions of the programme, we thought that we must participate in the World Water Week, Stockholm in a very significant way, have our presence, showcase our activities, showcase the diversity of Ganga Rejuvenation Programme, the basin approach and also learn from the experiences of others.

In his address, the minister gave an overview of an integrated approach of India towards the management of all aspects of the water sector and topmost priority being given to India’s water security and comprehensive intervention by India for rejuvenation of its largest and most important river basin. the NMCG Chief said,

There were a number of sessions where other river basin authorities also participated. We had people from Ryan and other Asian river basins also. Australians were also there. So, we had an interaction with them about River Basin Organisations and what kind of work they are doing and what kind of strategies they have.

“They also visited our pavilion and we had good discussions with their senior experts of what India is doing. We have also brought the basin approach in our river rejuvenation programme,” he added.

Prominent dignitaries who visited `Namami Gange’ pavilion include King Carl XVI Gustaf, Crown Princess Victoria and Duchess of Vastergotland, who took a keen interest in various activities displayed in the exhibition and spent quality time in the pavilion.