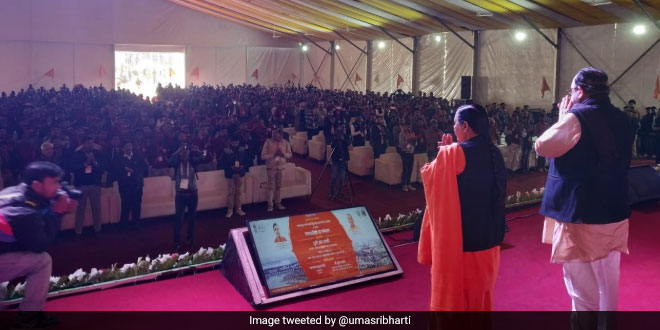 New Delhi: The 55-day long Kumbh Mela saw record-breaking 2.25 crore devotees take the first ‘Shahi-Snan’ (Holy dip) in the ‘sangam’ of the rivers Ganga, Yamuna and Sarswati. With the theme of the festival being ‘ Swachh Kumbh, Surakshit Kumbh’ (Clean Kumbh, Secure Kumbh), the Minister for Drinking Water and Sanitation, Uma Bharti decided to visit the venue with the aim to review the sanitation arrangements.

The Minister addressed a specially convened ‘Swachhagrahi Sammelan’ at the Mela and appreciated the efforts made by the Kumbh and district authorities for making this year’s Mela clean and safe. Ms Bharti interacted with 1,500 sanitation workers, also known as Swachhagrahis, deployed from different districts of Uttar Pradesh to ensure cleanliness at the Kumbh.

Hon'ble Minister, DWS, Sushri @umasribharti along with Shri Suresh Khanna, Hon'ble Minister of Urban Development, Govt. of #UP addressed 1500 #Swachhagrahis in #Allahabad for their support towards ensuring #Swachhata at the #KumbhMela2019. pic.twitter.com/bX83n40wS3

The 1,500 swachhagrahis have been assigned the job to monitor toilet cleanliness and awareness for 24 hours throughout the 55 days. The monitoring will be done via an ICT mobile application through which the cleanliness status will be recorded.

She reviewed the interventions taken by the Uttar Pradesh state government for better sanitation and awareness generation around Swachh Bharat Abhiyan in Prayagraj. She also wished luck to the state in its goal to go ODF plus, following a toilet building spree to boost their sanitation coverage.

I would like to congratulate the UP government for boosting their sanitation coverage from 48 per cent to 100 per cent in the last two
years.

Ms Bharti specifically lauded the contribution of women in sanitation. She appreciated the outstanding work done by the Swachhagrahis at the grassroots, making the Swachh Bharat Mission Rural a success. Ms. Bharti distributed a cleanliness kit to 50 Swachhagrahis and also inaugurated an exhibition based on the concept of “Swachh Village”.

Also Read: Allahabad To Get Over One Lakh Toilets For An Open Defecation Free Kumbh Mela

Deputy Chief Minister, Uttar Pradesh, Keshav Prasad Maurya, who joined the Minister at the event, appreciated the work done by the Swachhagrahis, and said that sanitation and cleanliness should be everyone’s business.

‘Delhi Has Become A Gas Chamber,’ Says The Supreme Court Justice Who Has Decided To Relocate After Retirement