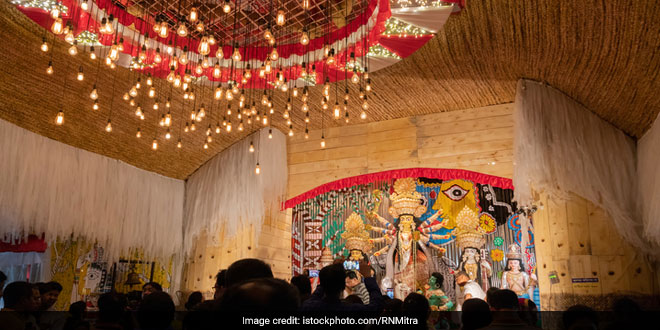 Mumbai: Durga Puja, an annual festival, is just around the corner and people all over India are gearing up to welcome Maa home for five-day long celebrations. Along with food, fun and fervour, the festival’s negative impact on the environment has been increasingly a cause of concern, from waste generated at the pandals to the water pollution caused due to immersion of idols in water bodies. The volume of waste generated by the pandals at the end of the festival is massive and every year the sanitation workers put in extra amount of work and time to clear out the garbage. As a solution to the problem, the Ranchi Municipal Corporation (RMC) will organise a cleanliness competition among the pandals at the end of which pandals with the best waste management mechanism will be felicitated.

As the population increases, the number of people wanting to visit pandals during Durga Puja also increases and this in turn gives rise to pandals in the city. More the pandals, more the waste generation and the cycle continues. With each passing year, we have to hire extra people to cleanup the mess post the festival. It is very important for people and the organisers of pandals to know that they are equally responsible for the garbage as the municipal corporation is. Since it is difficult to hold people responsible, we decided to put the onus on pandals by coming up with the competition, says City Manager Sandeep Kumar from the Swachh Bharat Mission cell.

For the first two years we stuck to a few parameters as we didn’t want to intimidate the pandals. During this year’s Swachh Survekshan we educated people about the different categories of cleanliness and thus we decided to add two more categories – Innovation and Education, says Mr Kumar.

Under its newly formed innovation category, pandals will be judged on the props they will be using to decorate the pandal. While recycled, upcycled or reused materials in the pandals will attract marks, non-biodegradable items like plastic and thermocol will lead to negative marking. In terms of educating the people, the pandals will have to execute ‘Information, Education and Communication’ (IEC) activities.Shedding light on the IEC activities, Mr Kumar says,

Telling people about cleanliness and waste management is easy but the challenging part is to make people execute it and sustain it in the long run. Last year many pandals had used audio-visuals to spread awareness. A couple of pandals had even kept Swachh Bharat as their theme. It’ll be interesting to see what the pandals have to offer this year.

One of the five Swachh parameters for the Puja pandals is managing the nirmalaya waste (which refers to immersion waste items like flowers, leaves, decorations, etc.). The aim behind the criteria is to prevent water pollution during idol immersion. Number of bins kept for dry and wet waste, cleanliness maintained outside and inside the pandal are some of the other parameters. Each of the category will carry 20 marks and every pandal will be marked out of 100 points.

A special committee has been constituted to monitor ‘Swachh Pandal’ competition under the supervision of Mr Kumar. The competition will commence from October 15 and will end five days later on October 19.

Delhi Airport To Become Plastic-Free By The End Of 2019