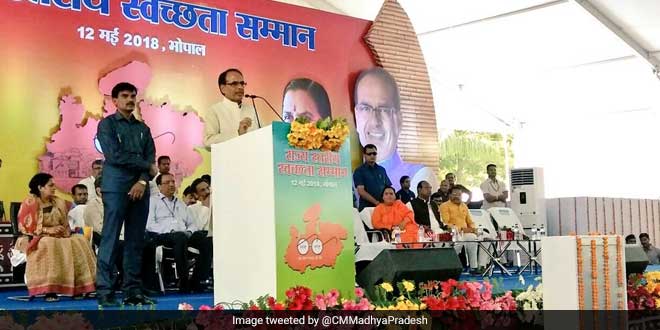 New Delhi: ‘We have decided and we will make sure Madhya Pradesh is open defecation free (ODF) by October 2,’ says Chief Minister Shivraj Singh Chouhan while launching Gobardhan Yojana (scheme) in Bhopal recently along with Union Minister for Drinking Water and Sanitation Uma Bharti. Highlighting Madhya Pradesh’s performance so far in Swachh Bharat Abhiyan, Chief Minister Shivraj Singh Chouhan added, ‘87% toilets have been made in the state, we will build 11 lakh toilets more to achieve the open defecation free tag. I appeal to people of Madhya Pradesh – use toilets and do away with their habit of defecating in the open. We all need to take this oath of making our state free from open defecation by this year.’

87% toilets have been made in the state while 11 lakh toilets will soon be built. I appeal people of Madhya Pradesh to use these toilets and do away with their habit of defecating in the open: CM pic.twitter.com/zTtYEdkHkU

Additionally, the Chief Minister announced the government’s decisions to ban plastic in the state. He added,

Plastics are highly hazardous to the environment. It is also one of the key reasons for cow deaths in India. We need to take a pledge to stop using it. In coming few days, we will launch a mass awareness drive against the use of plastic in the state and will make then come out with a series of ban on the usage of plastic. Details of the ban will be announced soon.

Plastics are detrimental and highly hazardous to the environment. It is also one of the key reasons for cow deaths. We need to take a pledge to stop using it. By October 2, 2018, each household in Madhya Pradesh will have a toilet built: CM pic.twitter.com/9A7msHgntj

When it comes to cleanliness, Madhya Pradesh has achieved great achievement. Now, the state is progressing towards achieving the open defecation free.

Areas that have become ODF, now, need to move towards ODF Plus and work for complete cleanliness. My appeal to everyone – make cleanliness your habit and practice proper disposal of waste on regular basis.

The urban areas of the state were declared open defecation free last year on October 2, 2017. Now, taking the cue from its counterparts, rural areas aim to achieve ODF tag by October 2, 2018. Till date, in rural areas, more than 56 lakh toilets have been constructed, and the sanitation coverage has moved up from mere 27% in 2014 to 87% now.

Currently, the state is focusing on constructing additional 11 lakh toilets to attain the ODF tag and improve sanitation coverage of areas like Singrauli, Sheopur and Chhatarpur that still are lagging behind in their swachh targets.

Poor Air Quality Affects People In Rural Areas As Much As In Cities: Study