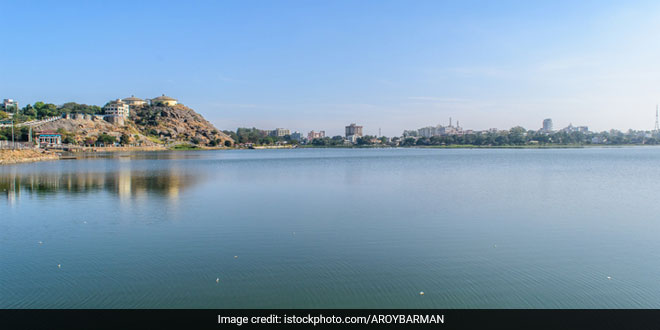 In a virtual event titled ‘Swachh Mahotsav’, the performance of Jharkhand’s cities were recognised in various categories. Jamshedpur was awarded the ‘Best City in Citizen Feedback’ category for cities with population 3-10 Lakh. Madhupur and Khunti were also declared ‘Best City in Citizen Feedback’ in the East Zone category of cities with a population of 50,000 to 1 lakh and 25,000 to 50,000, respectively. Jharkhand’s Jugsalai received the award for ‘Best City in Innovation and Best Practices’ in the East Zone in cities with population 25,000 to 50,000 category.

According to Amit Kumar, Director, State Urban Development, Jharkhand, the awards and the recognition is the result of creating ODF (open defecation free) communities, providing better access to public and community toilets and gathering citizens’ feedback through Swachhata App.

When Swachh Bharat Mission was initiated by Prime Minister Narendra Modi, he stressed on creating a Jan Andolan (people’s movement). Taking that into account we ensured people participate in not only making the state clean but also give their feedback in Swachh Survekshan 2020. Citizens were encouraged to actively participate in the activities of the mission. Grievance redressal is being carried out successfully through Swachhata app in all ULBs, said Mr Kumar.

Jharkhand Moves From ODF To ODF Plus Plus

39 cities of the state have attained the ODF plus tag and two cities – Jamshedpur and Sahibganj – were made ODF plus plus. Going forward, the focus is on ensuring all ULBs become ODF plus plus. Special attention is being paid to the cleanliness, operation and management of community and public toilets. 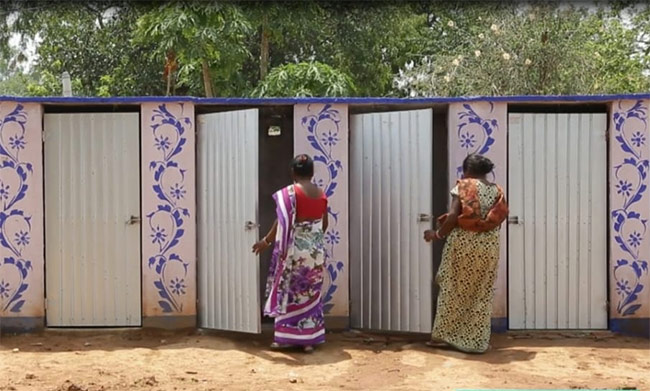 The urban areas of Jharkhand were declared open defecation free (ODF) on October 2, 2017

Waste Management For The Win

Jharkhand generates 1,846 tonnes of waste per day. Of this, 1,033 tonnes is wet waste that includes food and vegetable waste and 813 is dry waste including paper, plastic, metal, glass, among others. According to the official data, 1,667 tonnes of waste is collected on a regular basis. While 1,181 tonnes of waste is treated, 486 tonnes is dumped in a landfill. 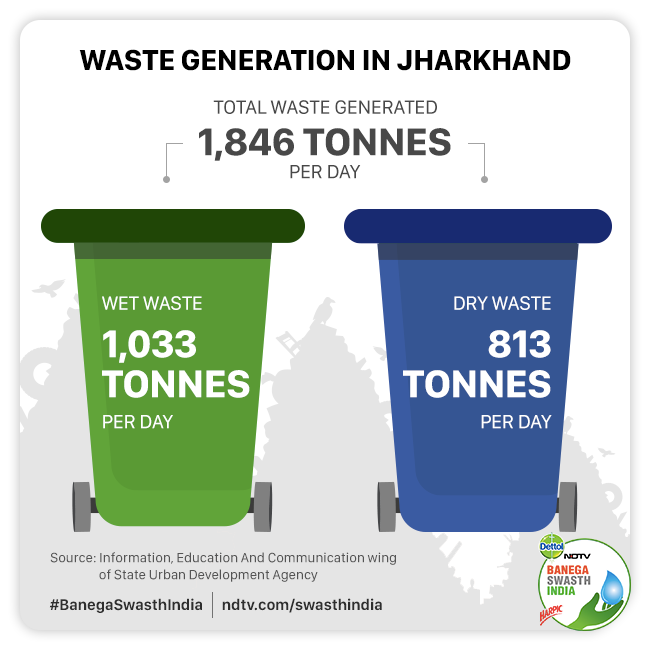 Cities have waste to compost plants of capacity ranging from 25 TPD (tonnes per day) to 150 TPD. ULBs practise vermi composting as well. Along with this, onsite composting is done by bulk waste generators and households. 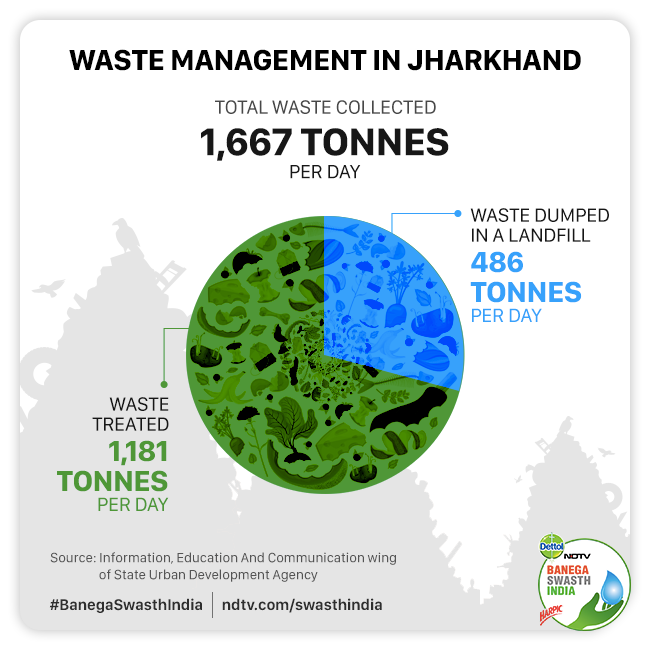 Of the total waste collected, Jharkhand treats majority of the waste

For the treatment of dry waste, municipal corporations across the state have installed reverse vending machines which take in a plastic bottle and doles out some sort of goodies or incentives for the user, material recovery facility, and tied UP with recyclers. Non-recyclable waste is handed over to cement industries for the purpose of processing. 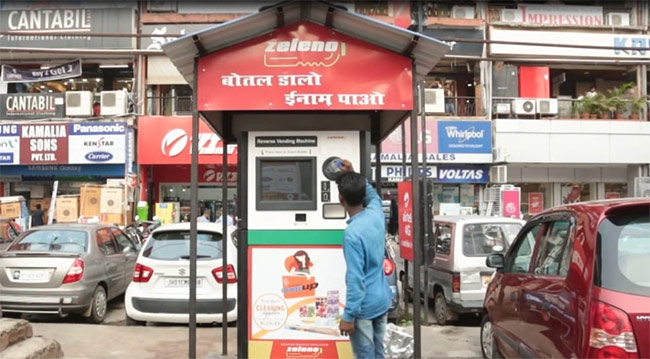 For better performance in Swachh Survekshan 2020, door-to-door waste collection of waste was ensured in all cities of the state. Special attention was and is being paid to cleanliness of small towns, said Mr Kumar.

Under the star rating assessment for the year 2019-2020, Jharkhand’s Jamshedpur was declared as 3 star garbage-free city. The Star Rating Protocol for Garbage Free Cities was developed by the Ministry of Housing and Urban Affairs in January 2018 to institutionalise a mechanism for cities to achieve Garbage Free status, and to motivate cities to achieve higher degrees of cleanliness.

Talking about the waste management in Jamshedpur, Rupal Poddar who lives in the Tata Steel area of the city said,

My family lives in quarters provided by Tata Steel and our area is managed pretty well by Jamshedpur Utilities and Services Company Limited (JUSCO). JUSCO has provided three buckets – small red, small green and a big green bucket to each quarter. Red bucket is for wet waste, green is for dry waste and the other big green bucket is for collecting fallen leaves. Quarters have a high green cover which is directly related to high yard waste so a separate bucket is required. One can clearly see the difference in the levels of cleanliness in Tata Steel and non-Tata Steel operated areas.

Amid the pandemic, special attention is being paid to bio-medical waste management for that Common Biomedical Waste Treatment Facilities (CBWTF) are tagged with hospitals, isolation and quarantine centres. This means the bio-medical waste directly goes to treatment facilities.

Patients in home isolation are provided yellow bag to collect their bio-medical waste separately and hand over the same to the waste collector, said Mr Kumar.

Jugsalai is a very small city, with a population of 50,000 people and the concept of chaupal (meeting place) still exists here. Generally, Indians are addicted to tea and I saw the same thing in Jugsalai – elderly gathering at a tea shop, sipping tea and discussing politics, entertainment and other things. One day, while coming to the office, I casually asked a tea shop owner, ‘how much tea leaf waste do you generate?’ and he said four to five kgs. If there are more than 20 shops in a city then this is a considerable amount.

Being well aware of the benefits of tea leaves for flowering plants and kitchen garden Ms Kumari decided to take benefit of this kitchen waste. Soon tea shop owners were convinced to collect tea waste separately and self-help groups were roped in to generate compost using this waste. 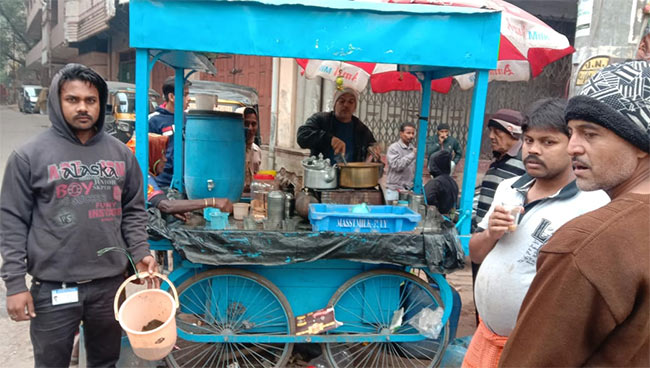 50 kgs of tea waste is collected every month. SHGs mix this with other kinds of wet waste and generate compost which is then sold to the citizens at a price of Rs. 20 per kg, said Ms Kumari.

The project was initiated in November 2019 and was getting support and participation from local tea vendors but then the outbreak of Novel Coronavirus led to closure of local shops and brought the project to a standstill. However, now, with the phased re-opening of the country after COVID-19 induced lockdown, the municipal corporation is planning to restart the project.

India Overtakes Brazil To Become Second Worst-Hit Country From COVID-19 Pandemic In The World, What Is The Reason Behind This Surge