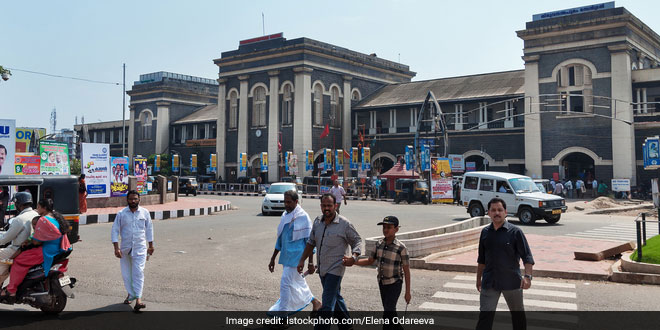 Mumbai: On September 15, disposable plastic items like bottles, plates and cups from food catering units inside the Thiruvananthapuram Central Railway Station were being transported to the nearest recycling facilities. The move to eliminate single-use plastics was a part of the green protocol action plan of ‘reduce, reuse and recycle’ implemented at the station under the 15-day Swachhata Hi Seva campaign that began from Saturday. All the shops and food counters inside the station were directed to switch to eco-friendly options like paper bags, steel plates and spoons.

Thiruvananthapuram Central station to be transformed into a Green Protocol station as a part of swachchtha hi seva campaign. pic.twitter.com/X2XMBuamSw

“The green protocol isn’t a rule and hence we are not banning any plastic items on the stations. Having said that, we expect people to follow the guidelines mentioned in the green protocol. We want to set an example that plastics can be avoided if all the stakeholders come together and decide to do away with them and it is not necessary to have a rule or law in place. While customers shouldn’t ask for plastic carry bags, shopkeepers must have plastic-free cutlery. And as for officials, we have directed everyone to bring steel bottles to work instead of the plastic ones,” said a senior railway official.

The protocol, which has different set of guidelines, prohibits the use of flex banners and allows only banners made from cotton to be used.

Reduction of flex banners to minimum. Promotion of use of eco-friendly cloth banners. Further new station advertisement boards will be allowed only if they are made of cloth or tin, states the official directive.

The Railway Authority has also requested the officials to refrain from using any kind of plastic items in the premises and in their offices. Purchasing of water bottles and using plastic cups is to be avoided and as an alternative the railway will increase the number of water cans on the station. Steel tumblers will also be distributed in all the offices.

“The number of water cans and water vending machines at the stations will be increased in the coming few weeks to discourage people from purchasing plastic bottles. This will not only keep a check on plastic menace but will also help curb littering immensely. Among the littered items, plastic bottles are the highest. Passengers often discard it on tracks and platforms despite having dustbins,” added the official.

The railway staff is also encouraging commuters and officials to discard plastic bottles in the PET Bottle Recycler Machine that was installed on platform number one last month by Dr. Shashi Tharoor, Congress MP from Thiruvananthapuram. It has a processing capacity of 500 PET bottles per day and storage capacity of 5000 shredded PET bottles.

People exporting and importing fish are being encouraged to use re-usable fish carrying boxes instead of thermocol boxes for fish transportation in railways. Besides all these measures, the Railway Authorities are educating people about maintaining cleanliness and hygiene on the platforms through announcements andnukkad nataks or street plays. Students from local colleges perform plays to promote waste management on every alternate day.

Anti-littering campaign in the station is also being taken up aggressively in the run up to Mahatma Gandhi’s birth anniversary and completion of four years of Swachh Bharat Abhiyan on October 2.

Prime Minister Narendra Modi had launched ‘Swachhata Hi Seva’ movement, a 15-day cleanliness campaign to ensure high standard of cleanliness across the country. The Prime Minister had written to almost 2,000 citizens from different walks of life, inviting them to be a part of the cleanliness drive.

Today, September 15, is a historic day, as from this day we are starting a new resolution to keep our India Clean. We are launching a 15-days cleanliness campaign – Swachhata Hi Seva, Prime Minister Modi had said while addressing the nation.