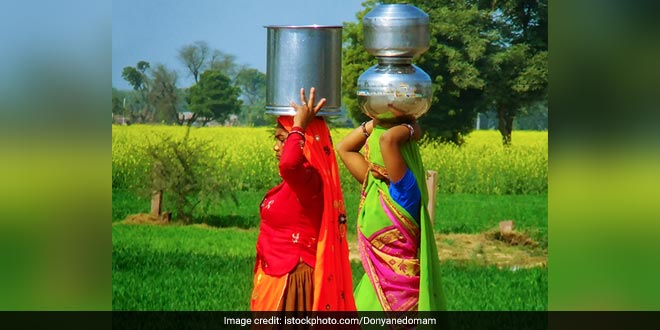 Stockholm: Combining community health with women’s empowerment, small water enterprises (SWE) are making giant leaps in addressing the potable water needs of more than a million people in India’s villages at minimal cost. “Water aunties” and thousands of others are the agents of change working through SWEs, which minimise the cost of treating water to just a few rupees and require modest investment, to help to improve the health outlook of many in rural India. Their role in effecting transformation was spotlighted at the recent World Water Week organised by Stockholm International Water Institute (SIWI). Cherra Padmaja told PTI over the phone, “General health has improved in my village in Warangal. Everybody in the village now calls me Water Aunty fondly.”

Her remarkable story from faraway Warangal in southern India found wide resonance in this European capital. In what villagers in Rangasaipet, a remote village in Telangana’s Warangal district, described as an “epidemic”, it was common for children to develop mottled teeth and adults skeletal deformities. The reason: the groundwater was contaminated with high fluoride.

In 2016, Padmaja, now 39, fed up of her family members falling sick ever so often decided to change her village’s fortunes. With the help of non-profit registered trust Safe Water Network, Padmaja set up a safe water-dispensing station to provide affordable and treated drinking water to 5,000-odd residents.

The water station called iJal treats groundwater from borewells to make it fit for human consumption. Twenty litres of treated water is priced at Rs 5. Padmaja’s day goes in taking care of the station. She fills the treated water tank in the morning and evening hours when there is power. The system is equipped with a remote monitoring system to send automatic alarms and alerts every 15 minutes about the quality of the water. Since 2010, Safe Water Network has facilitated 300 SWEs or iJal Stations in Uttar Pradesh, Telangana and Maharashtra.

The SWEs provide access to safe drinking water for over a million people in India with the annual dispensed water level being 290 million litres, said Pooja Singh, head of Monitoring and Evaluation at Safe Water Network. Talking to PTI on the sidelines of the World Water Week, she claimed people have reported better health, reduction in medical expenses, decline in children and elders falling sick and reduction in school absenteeism in areas where iJal stations were set up.

She explained that all SWEs are locally-operated and managed under different operating models: Entrepreneur, Safe Water Committees and Self-Help Groups. Ms. Singh said their focus is to recruit women for different positions in the iJal supply chain. She said,

The field-validated water model offers a strong value proposition that can be leveraged to increase women’s empowerment leading to positive individual and collective impact, by engaging them into more meaningful, decision-making roles as water entrepreneurs or managers than merely being water carriers.

According to her, the water stations have boosted job creation and fuelled sustainable development and improved the well-being of women and girls by reducing the drudgery of water collection, freeing up time to pursue education and employment. The initiative has drawn praise from several experts for combining community health with women empowerment.

Women are already the primary water decision-makers at the household level, but when women influence water management, their communities get measurably better outcomes – including better-functioning water systems, expanded access, and economic and environmental benefits.

Trivedi noted that any efforts at the local level, like SWEs, must also ensure that women are equally present at the decision making levels, especially in countries like India where cultural barriers may otherwise restrict their participation. Mokka Ramadevi, from Gollapadu village in Telangana’s Khammam district, about 100 km from Padmaja’s village, proves Trivedi’s point.

About the same time that Padmaja was working towards providing safe water to her community, Ramadevi was taking the reins of entrepreneurship. Ramadevi, newly married and pursuing a postgraduate degree, was shocked at the suffering she saw due to water contamination in her village of a little more than 2,400 people. She had heard about iJal stations being set up with the aid of Safe Water Network and persuaded her husband to invest money in them. The couple invested Rs. 5 lakh to set up the station, complete with the operating system, civil construction and installation. The overall cost of the project is Rs. 20 lakh, including costs such as field support and community mobilisation. Stakeholders, including corporates and self help groups, helped them meet the costs of the remaining Rs. 15 lakh. “In our village, schoolchildren would often fall sick and not attend classes. Now, the absenteeism rate has reduced. The village residents now involve me in other welfare schemes,” she said.

With nearly 70 percent of the country’s water being contaminated, the UN ranks India at 120th position among 122 countries in the water quality index. According to the NITI Aayog, 82 crore people face water scarcity, 82 per cent rural households do not have piped water supply, 16.3 crore don’t have access to clean water.