New Delhi: October 16 was marked as World Food Day with the theme of ‘Leave No One Behind’. It was commemorated in the backdrop of multiple challenges including the COVID-19 pandemic, conflicts, climate change, inequality, rising prices and international tensions. Globally, people are facing the ripple effect of these challenges that know no borders. With the idea of leaving no one behind, this year is about focusing on better production, better nutrition, a better environment, and a better life. To mark the same, NDTV-Dettol Banega Swasth India exclusively spoke to Shombi Sharp, United Nations Resident Coordinator in India.

Talking about leaving no one behind, Mr Sharp said,

We are recognising that as food systems are increasingly stressed, as the world faces these overlapping crisis, poly crisis as we say – climate change, then wars impacting value chains, food, fertilisers, prices are going up, the impact first is felt the most by those who are most vulnerable, obviously. Poor populations, rural populations, often times women, children, different landless labours, smallholder agriculture households, and others. It is critically important that we ensure that we have the data and we have the systems to reach those people who are suffering from undernourishment and lacking access because at the moment, food availability still is not the issue. Worldwide there is enough food for everybody. It is a question of accessibility. 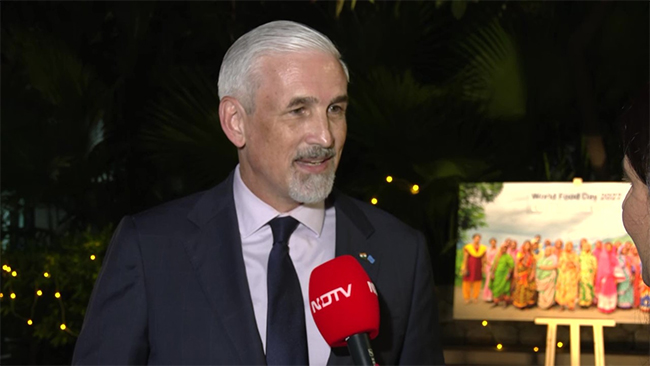 Mr Sharp further clarified that in the future there could be a lack of food availability. Sharing it as a concern, he said,

In the face of this overlapping crisis, especially climate change and the impact that heatwaves, flood events and such events are having on agriculture here in India and in every country in the world, we are concerned. Looking ahead availability might become a problem in the next year, two years or five years ahead. We have to prepare for that.

Sharing the grim reality of the food and hunger crisis the world is facing at present, Mr Sharp said,

828 million people are currently hungry. Over 100 million of those have been added during the Covid pandemic and this number just continues to increase. I would say that India has been well-positioned. India still faces certainly significant challenges in terms of ensuring that nobody faces hunger and nobody is undernourished but, systems are in place.

All of these systems are only providing the basis for improving development outcomes but they have been really important buffers for the shocks coming in. Many countries have not been able to withstand some of these shocks from COVID, wars and such. India also has cutting-edge technologies like the Indian national tech-sat, aadhar card, one nation one ration card and digitisation. You have biometric-based ability now not only to target people but to follow them as they move around the country. This is critically important too.

Believing in ‘leave no one behind’ also means taking a step toward the Sustainable Development Goal 2 of Zero Hunger. One of the targets is to end hunger by 2030 and ensure access to food by all people, in particular, the poor and people in vulnerable situations, including infants, to safe, nutritious and sufficient food all year round. Talking about the importance of the aforementioned goal, Mr Sharp said,

Further talking about food security and what is needed to ensure it for all, Mr Sharp said,

Food security is critical for individuals, households, communities and society at large, for all of the SDGs. Again now, it really is about increasing productivity where we can. In India, for example, a lot of work that the UN system is engaged in is about helping especially smallholders improve productivity. At the moment, productivity on average is relatively low. Secondly, it is about ensuring access to markets, access to food, for those people who may face different barriers, about improving the efficiency of the distribution system, of logistics. It is also about changing our behaviours at a fundamental level – about eating local production, focusing more on consuming seasonal production, understanding those crops which we often called superfoods, more climate resilient, using less water and actually more nutritious.

When asked more about achieving the goal of zero hunger, Mr Sharp said,

It is really important that we transition a lot of the production away from mono-cropping and away from certain food products that are low value in nutrition, high consumption in terms of water and not very resilient to climate as well. To changing the nature of the markets, changing the nature of what we eat, understand and value in agri-business and agri-systems in a different way.

Mr Sharp categorically said that it is not just about government, business and industries. It is also about individuals and consumers and the way we can drive markets, changing our consumption so that it is sustainable so that we can all thrive in the future, he said.