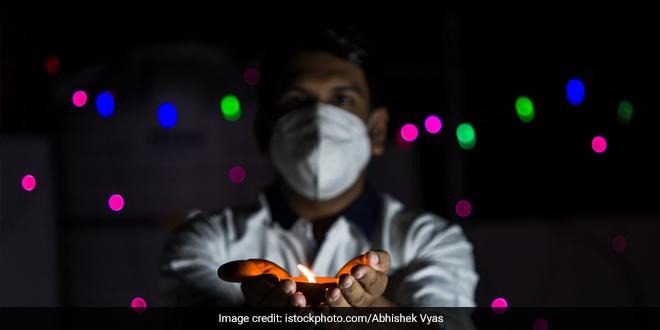 New Delhi: People should continue to wear masks in crowded areas, especially those in the vulnerable category like pregnant women and the elderly, experts said on Thursday (October 20), hours after the Delhi government withdrew the Rs 500 fine for not wearing it in public places. Doctors at the city’s leading government and private hospitals concurred that people should exercise “extra caution” because though cases in Delhi are on the lower side, a new variant of COVID-19 is being reported which is very transmissible.

It is a festive season and people will ge together, socialise at workplace and at homes. Though the fine for not wearing mask has been lifted, I would still say that people should wear it in open and crowded places, during meetings in enclosed rooms, if not at homes. More than laws, we need self-discipline, as we have all learned a lot in these two years.

The doctor said air quality in Delhi has dropped and so a mask can protect from various other kinds of pollution-related infection too.

The Delhi government on Thursday issued an order withdrawing the Rs 500 fine for not wearing masks in public places in the national capital.

The Delhi Disaster Management Authority (DDMA) in a meeting last month had decided to stop levying the penalty after September 30 amid a decline in COVID-19 cases.

The authority in its meeting on September 22 noted that the positivity rate of the COVID-19 infection has come down substantially and majority of the population has been vaccinated.

The number of active cases now stands at 488. The number of daily cases in the city had touched a record high of 28,867 on January 13 during the third wave of the pandemic.

We have to be cautious since a new variant is being reported. People who are vulnerable to such infection such as pregnant women and the elderly should continue to wear mask in public places, fine or no fine.

“Also, we all need to be extra cautious because a new variant of COVID-19 is being reported, which is very transmissible. Though cases in Delhi are on the lower side, the fine for not wearing a mask in public places being lifted should not push us into a zone of false sense of security that ‘everything is fine’. Having said that, we should not panic either,” she said.

Dr Chatterjee at Apollo Hospital said a person not wearing a mask is also at risk of contracting many other respiratory infection if standing next to a person who has any of these infections. So a mask helps, he said.

In its meeting held last month, the DDMA had emphasised on not lowering guard against Covid in view of the upcoming festivals.

Some expert had then said that the government could have waited for two months for the festive season to end, while others had said people should voluntarily be allowed to discipline themselves.

Diwali falls on October 24, followed by Chhath festival few days later and then Christmas in December.

There Is Enough Food For Everybody, It Is About Accessibility: Shombi Sharp, UN Resident Coordinator