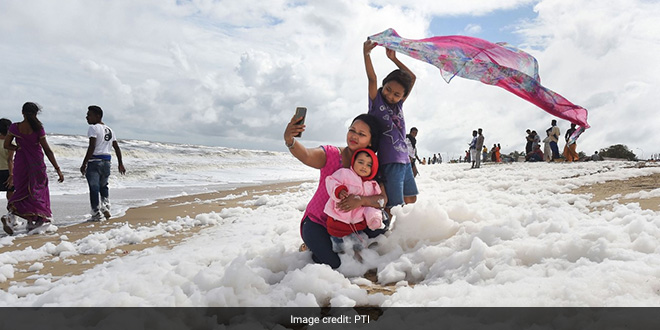 New Delhi: Chennai’s Marina Beach, running from Fort St. George in the north to Foreshore Estate in the southern part of the city, is the longest natural urban beach in India covering a total distance of 6 kilometers. This beach is a well-known tourist hub and according to the Chennai Corporation, it sees as many as 30,000 visitors on weekdays and more than 50,000 on weekends and holidays. The tourists visiting the Marina beach this past weekend however saw an unusual sight that they couldn’t believe – the sea water changing into froth as it reached the shore.

According to experts, the thick froth was a result of the Adyar River’s water getting mixed with untreated sewage, resulting in the toxic white foam-like substance at the shore. The frothing occurs during the rainy season due to the presence of non-biodegradable and detergent-like effluents coming from municipal and industrial wastes, they further explained.

Drains like Adyar and Kovam mix with the river resulting in the froth. This situation has been here for the past few days. Fishermen are not going into the sea. We are struggling because of this froth, Ramesh, a fisherman told ANI.

“When there are rains, there is increased inflow into sewage treatment plants (STP) as the stormwater also enters the sewage network,” explains Pooja Kumar of the Coastal Resource Centre.

Let’s say there is an STP that can treat 100 litres an hour, and it receives 100 litres of sewage plus 100 litres of rainwater. The STP is capable of only handling half that volume. So what it released is essentially untreated sewage or partially treated sewage. Our sewage contains detergents which tend to foam up when the water is agitated. When there is sudden flow in a waterbody with many blockages, there are plenty of places of turbulence which increases the agitation and creates the conditions for creating foam, says Ms. Kumar.

Also Read: Swasth Report Card: One Of The Healthiest States Of India, There Are Two Sides To Tamil Nadu’s Health Story

It is not necessary that there is an excess discharge of sewage. This phenomenon is a result of a volumetric increase of sewage as a result of dilution with rainwater. Rainwater also washes out various contaminants from the surfaces it touches, including roads, roof-tops and open earth, she adds.

Last year too, there were multiple reports of foam forming thick blankets on the city’s coast from Ennore to Tiruvanmiyur. Environmentalists, however, have pointed out in the past that the froth is a result of illegal outfalls along the Adyar river which are discharging sewage.

While most people were aware of the hazards of the toxic froth, like breathing difficulties, irritation on the skin, besides spreading an unbearable stench, there were visitors, including young children, who were seen enjoying and playing ball and taking selfies amid the froth. 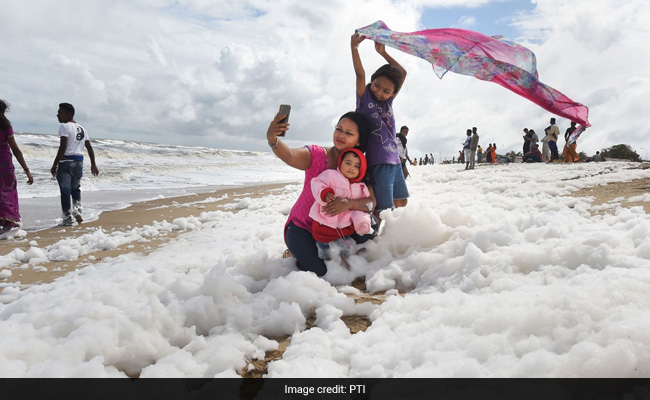 A mother who stopped by the beach on Sunday with her toddler and infant, sat amid the froth to take a selfie

After hearing the news that the sea is filled with froth, we came here with the family to enjoy. It was very nice to see. It is because of toxic materials coming from the river Adyar, the water looks dark black in colour, a Chennai resident Surya told ANI. 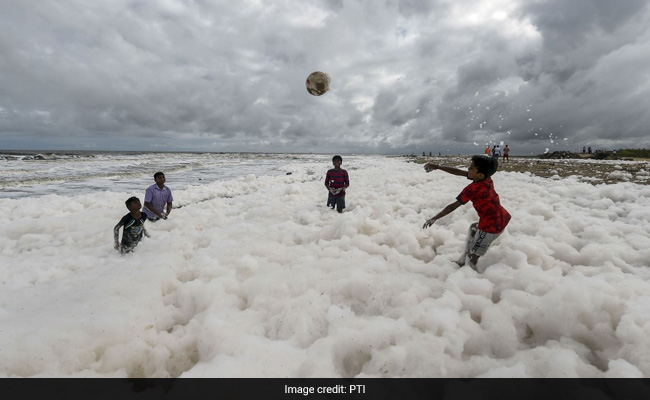 Several people reacted to the extreme pollution on Twitter as the hashtag #MarinaBeach was trending on the micro-blogging site on Monday.

“This is Marina Beach in Chennai which is spilling toxic foam now. A return gift for spoiling the sea by pollution. A dying beach maybe.” Tweeted an Indian Forest Service Officer, Praveen Kaswan.

This is Marina Beach in Chennai which is spilling toxic foam now. A return gift for spoiling the sea by pollution. A dying beach maybe. pic.twitter.com/Qd6ZYvsD4k

Toxic Foam Blankets Chennai’s Marina Beach, Causes Pollution Hazard. A menacing white foam covered one of the most famous beaches in Chennai for the fourth straight day today creating a new pollution hazard for the country, read a tweet.

“Lakes, River and now Sea shores … message for all of is , things need to be fixed,” wrote a user.

Lakes, River now Sea shores … message for all of os , things need to be fixed.

“What have we done to mother earth in the name of so called development.”

What have we done to mother earth in the name of so called development ????

On the other hand, this DMK MLA called out the people, who seemed to enjoy the pollution,

“Why go stand in sewage contaminated toxic froth. Am sure most have read about the polluted #Bengaluru lake and the way it was throwing toxic froth out!”

SERIOUSLY !!! HOW DUMB can people get ???????????? Why go stand in sewage contaminated toxic froth !!! Am sure most have read about the polluted #Bengaluru lake and the way it was throwing toxic froth out !!! What was it Belandoor or Bellandur ????????#MarinaBeach https://t.co/4Lm8IAAHrU

This user requested the authorities to “place a sign board near #MarinaBeach stating, DO NOT ENTER THE BEACH” to help inform the visitors about the poisonous nature of this froth.

This isn’t the first time a phenomenon like this has occurred. Last year, Bangaluru’s Bellandur lake suffered with thick froth owing to the dumping of domestic and industrial waste into the lake, as per National Green Tribunal. National Capital’s Yamuna shore as well, has seen froth emerge on the shore for a couple of years now, especially around the Chhath Puja this year.