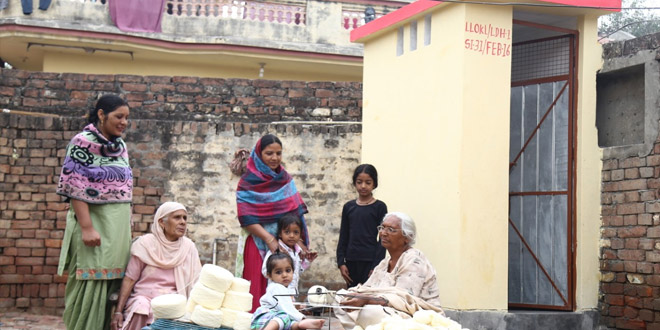 New Delhi: It was in 2015 when Paramjeet Kaur, remembers being on cloud nine, unable to contain her excitement as she now finally had access to a toilet. For someone who had not used a toilet for all her 25 years of existence, the fact that she no longer had to wait for darkness to relieve herself or never have to defecate in the open was more than just a relief, it was dignifying and almost empowering. Four years down the line, the smile fails to go away. Now a 30-year-old Paramjeet says,

Since birth, I have been going out to answer nature’s call and the practice didn’t stop even after my marriage. Infact, it became a task for me after I had three kids. From feeling ashamed of defecating in the open, scared of going out especially at night, to taking children with me, the whole process of open defecation came with a list of problems. The major issue we as a family faced was a continuous rise in our health expenditure and children skipping school because of regular fever, vomiting, and diarrhoea.

Paramjeet’s children would go to muddy and filthy area for defecation and attract germs and disease causing bacteria. The instances of diarrhoea would increase during rainy season. The health expenditure stressed her finances as back then Surender Singh, Paramjeet’s husband, was the sole bread winner of the family. Even though the family wanted to construct a household toilet, poor financial condition proved to be a roadblock. Paramjeet explains,

Back in 2014, my husband working in a nearby factory would earn only Rs. 4500 per month. He would further have to give away a part of his salary in case of absenteeism. I couldn’t take up a job because my children were young and needed attention. So, every month we would have a maximum Rs. 4500 to meet the growing medical and educational expenses of our children and sustain a family of five.

Families like Paramjeet’s had reconciled to a life of open defecation, where a toilet though desperately needed was a luxury. That is when things took a turn for better. Bharti Foundation, a philanthropic arm of Bharti Enterprises, started Satya Bharti Abhiyan in 2014, the same year when Prime Minister Narendra Modi launched Swachh Bharat Abhiyan to make India open defecation free by 2019. Satya Bharti Abhiyan, aimed at improving sanitation facilities in rural areas, was first launched in Punjab’s Ludhiana district (rural) and later expanded the scope of the campaign to cover urban areas of Ludhiana district. The campaign further spread its reach to rural Amritsar district in September 2017.

As per Nirmal Bharat Abhiyan baseline survey conducted in 2012, 10 per cent of the households in rural Ludhiana and 41 per cent of households in rural Amritsar did not have a toilet. Under Satya Bharti Abhiyan program, we envisioned to provide access to a toilet in every household not having one and promote good sanitation practices among community members at large, says Mamta Saikia, CEO, Bharti Foundation.

As part of the campaign, the team reached out to every household lacking sanitation facilities. In addition to the construction of toilets, the team joined hands with the administration to bring about behavior change in communities through IEC (Information, Education and Communication) activities.

Since the inception of the campaign, over 24,000 toilets across 1,200 villages, benefitting over 1,80,000 individuals have been constructed. Within the first two years of the campaign, over 17,500 toilets were constructed and handed over to families in rural Ludhiana, benefitting more than 86,000 people which translate into 24 toilets being provided per day. Thereafter, 774 toilets were provided in urban Ludhiana, where the work was completed in June 2018, says Ms Saikia.

Recently, based on the request from the Ludhiana Police Commissionerate, we constructed 37 separate ladies’ toilets in police stations, posts and offices. Now we are working in collaboration with the government of Punjab and aiding in construction of 20,000 toilets in rural Amritsar, informs Ms Saikia.

There were many challenges in the initial stage. People often considered having toilets inside their homes, as something which is inauspicious. To educate them and clear this misconception was a big challenge. Along with this, reaching out to every village, maintaining quality of toilets, bringing about a behavioural change among communities were some of the roadblocks for us.

The construction of toilets has instilled a sense of pride and security among women, since the absence of toilets restricted their movement and also exposed them to harassment, embarrassment, apart from various health risks.

After getting a toilet and everyone using it, not only our health expenditure has come down but my children have started attending school regularly. Now, I don’t have to walk miles and search for an isolated place to relive myself. A toilet has given me more time in hand and a part-time job at a factory which means more family income, says elated Paramjeet.

The program’s success and sense of ownership among individuals is evident with over 98.5 per cent registered usage of the toilets built, says Ms Saikia.