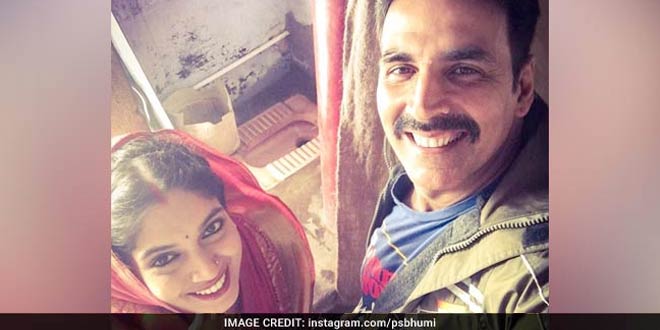 New Delhi: From the moment Prime Minister Narendra Modi flagged the ‘Swachh Bharat Mission’ in 2014, it has been the topic of much debate, and now it looks like the ‘Swachh Bharat Fever’ has hit Bollywood too. Akshay Kumar has just started shooting for his latest film, ‘Toilet- Ek Prem Katha’ directed by Neeraj Pandey, and co-starring Bhumi Pednekar and a toilet. In fact, judging by the picture the actor tweeted, the toilet seems to be sharing as much screen space as the leads.

A very good morning from @psbhumi and me from the sets of Toilet – Ek Prem Katha! First day it is…need your best wishes ?? pic.twitter.com/ouumNwfl1A

The government plans to construct 12 crore toilets in rural India, to achieve its goal of being open-defecation free by 2 October 2019. According to government figures, the Swachh Bharat push in rural areas has increased the access of toilets to 46.9% from only 32.6% in 2011 across the country.

(In Pictures: Two Years On, What Is The Status Of Swachh Bharat Abhiyan?)
Now it seems to be Akshay Kumar’s turn to spread the Swachh India message through the tongue in cheek film Toilet – Ek Prem Katha.

The movie will hit the big screen in December this year.

After Sikkim, Kerala, Himachal, These 4 States To Be Open Defecation Free