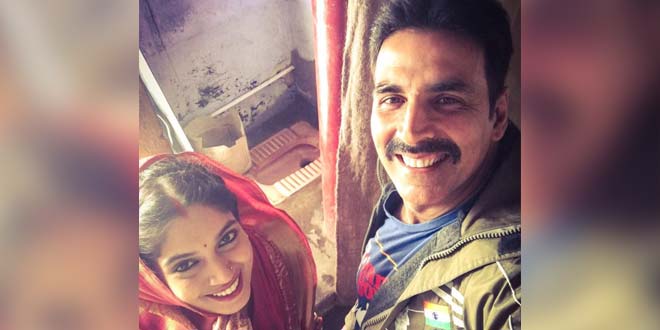 Mumbai: Actor Akshay Kumar is hopeful that his upcoming film “Toilet – Ek Prem Katha” based on Prime Minister Narendra Modi’s ‘Swachh Bharat Abhiyan‘ will make the audience aware about the problem of open defecation. The film, a social satire, talks about the issue of open defecation and Akshay Kumar feels it is one of the biggest problems in India and one must talk about it rather than brushing it under the carpet. According to the government data, nearly 43 per cent of India’s rural population defecates in open.

This issue is there in the face so I am talking about it through the film (‘Toilet Ek Prem Katha‘) and why should we run away from it. It is one of biggest problems we have. There are about 1000 children that die due to diarrhoea in India, says Akshay Kumar.

It is a real story and I thought if I make this film with realism, comedy, entertainment and good songs and present it to people they will understand the issue better. The message will be conveyed and it will help reach to a larger audience.

The star says 54 per cent of Indians do not have access to toilets which is alarming. Mr Kumar says the government is doing its bit by building toilets but there are people who do not make the right use of it.

Government has made toilets but people don’t use it and turn it into a commercial place. India is a country which has no toilets in proportion to its population. It is a shameful thing, he adds.

The actor also maintained that he doesn’t deliberately choose to do films that talk about issues.

I don’t plan anything; I decide to do a film only when I like the subject. If I feel that I need to bring out this issue then I go ahead. Like, I am doing this film. When I announced the name, many people called me to ask why I am using this title. I got a good script..so I said that I want to make this film. It is a taboo thing to talk about.

Directed by Shree Narayan Singh, the film has Bhumi Pednekar of Dum Laga Ke Haisha fame, paired opposite Akshay Kumar and is set to release in June.

These Five States Will Soon Be Declared Open Defecation Free