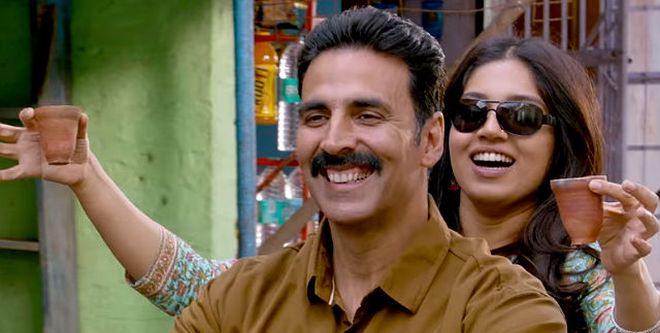 With ‘No Toilet, No Bride’ agenda Akshay Kumar and Bhumi Pednekar’s Toilet: Ek Prem Katha trailer which has got more than 14 million views till June 14 and counting has impressed everyone – from politicians to celebrities to critics and everyone part of the Swachh Bharat Abhiyan. The theme of the movie is being appreciated for spreading awareness about an important issue in India – Sanitation and Open Defecation. The trailer was unveiled during the India Vs South Africa Champions Trophy match on Sunday and from then Twitter can’t stop reacting to this ‘super hit’ concept, here’s how Twitter is reacting:

Good effort to further the message of cleanliness. 125 crore Indians have to continue working together to create a Swachh Bharat. https://t.co/C0XKPpguW7

2. Akshay Kumar’s appeals to the general public – ‘Ek binti..lauta do lota party ko!’ also got a praised from Riteish Deshmukh

Just what our country needs @ToiletTheFilm – proud of you Sundi @akshaykumar & @psbhumi you are awesome. https://t.co/ClPEhO1zBr

3. In India, around 450 million people, which is half the population of the world that defecates in the open, Swachh Bharat Abhiyan hopes to change.

4. The movie with a message that couldn’t be more relevant

5. Actor Arjun Kapoor echoed the sentiment about the relevance of the movie’s theme

And reactions poured in from other celebs too –

@akshaykumar Brother it's really amazing..entertainment with such an important social message .. https://t.co/GDSOVmDXlJ

Toilet: Ek Prem Katha, a social satire is a story of a married couple Keshav (Akshay Kumar) and Jaya (Bhumi Pednekar), who leave no stone unturned in order to get homes in their village to build toilets. Going against all the odds, both Akshay and Bhumi discourage the ‘lota gang’ and attempt to change the thinking of both men and women out there who still think defecating in the open is ‘acceptable’.

Women, Children Can Access Toilets At Hotels, Restaurants For Free In East Delhi