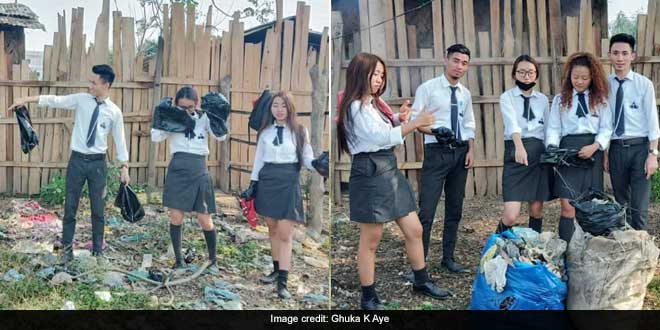 New Delhi: If you’re active on social media, you probably are aware of the latest internet challenge. Yes, following the famous plank challenge, ice bucket challenge involving the dumping of a bucket of ice and water over a person’s head to promote awareness of the disease amyotrophic lateral sclerosis and encourage donations to research, Kiki challenge focusing on the rapper Drake’s famous dance steps in the song ‘In my feelings’ and the 10-year challenge where people shared their photos from 2009 and 2019, comes the ‘Trash Tag’ challenge, and people love it! The challenge is basically about sharing a transformative before-and-after trash clean up pictures from dirty locations. No matter where you live on the planet, trash and litter is an alarming issue globally and the challenge proves it as people around the world are taking up the Trash tag challenge as well as motivating others to take it on.

The challenge, which became viral this month (March), has the bored ‘millenials’ encouraged to carry out clean-up activities and post pictures on social media. The #TrashTag challenge helps promote cleanliness and sends a positive message to the people that they can be a part of the change.

#trashtag seems to be trending. This one's from Nepal ???????? pic.twitter.com/stAxbQXhup

Along the Potomac River south of Washington, DC #trashtag pic.twitter.com/n2uPL52LZG

In India, however, the challenge is gradually picking up the pace with people claiming India needs this challenge more than anywhere else in the world, considering the behavioural pattern of Indians when it comes to littering.

#trashtag challenge has come at the most apt time for India.

A group of 5 students from Tetso College in Dimapur, Nagaland took up the challenge and posted their before and after results on Twitter and Instagram. The students, Ghuka K Aye, Kughaka Sumi, Helibo H Sumi, Vivikali Zhimomi and Atheli Zhimomi cleaned the market area of the district called Chumukedima.

Ghuka, one of the initiators, tells NDTV that they were simply sitting in their college canteen and talking about some viral internet challenges when the trash tag came up. Their main intention was to appreciate the person who came up with the trash tag challenge.

“We discussed among ourselves to take up the initiative and encourage other students and youths of Nagaland to help each other in keeping our surroundings clean.”

Also Read: Garbage A Ticking Time Bomb In India, Will Have ‘Disastrous Consequences’ If Not Checked, Say Researchers

Ghuka further said that they initially wanted to go around entire Dimapur and clear garbage that are is in, the middle of the town. But because they were in their uniforms and the condition of the roads in Dimapur is not very favourable, they changed their destination to Chumukedima.
“We also wanted to make the youth realise that it is only us who can make a difference and it is our duty to keep our city and country clean, just as we do with our homes,” he added.

More Indians are following up with the trend by accepting the challenge, even urging Prime Minister Narendra Modi to promote the challenge to make his flagship initiative Swachh Bharat Abhiyan, a success.

I don't have a before-and-after picture, but here's a couple of pictures of me with my family picking up trash from the road side whenever we made a rest stop. #trashtag pic.twitter.com/TygYf2dM13

With people from all across the world coming together to fight garbage crisis, let’s hope Indian celebrities and influencers take up the challenge to create a bigger difference in ensuring a cleaner and greener India!