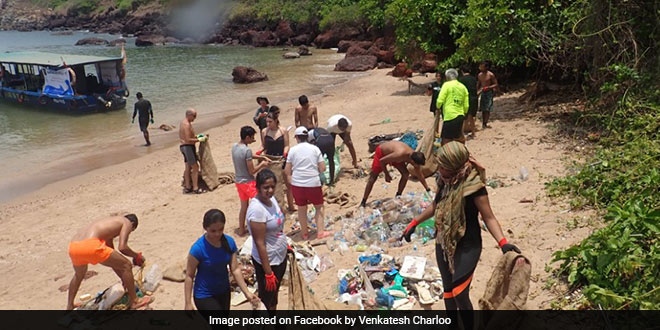 New Delhi: Worried that the annual June-September monsoon season rain, which is the lifeblood of agriculture throughout the Indian subcontinent, will wash away the single-use plastics and other waste from the Goa beaches to the ocean, V-Recycle, a waste management company organised beach clean-up drives. Over 25 citizen volunteers led by waste management expert Clinton Vaz from V-Recycle and Venkatesh Charloo, a scuba diving instructor who also regularly cleans up diving sites, collected over 3.5 tonnes of waste from the beaches in the past 2 weeks and sent it for recycling. On May 7, the group collected over 27 bags of segregated waste (weighing 900 kg) from Goa’s picturesque Grande Island or Bat Island, which is accessible only via a boat and is known to be the best place for snorkeling and scuba diving. Post this, the group went onto do two more cleanup drives – on May 17 at Monkey Beach near Vasco and then on May 18 at Grande Island – collecting over 153 bags of trash, weighing 2.6 tonnes.

The 153 bags of waste collected from the two beaches included 82 bags of beer and liquor glass bottles, along with 45 bags of plastic water bottles and 26 bags of non-recyclable waste. If we will not cleanup the Goa beaches now, then all of such waste… single-use plastics and other microplastics across all of the Goa beaches will get washed out to sea when it rains during monsoons. This waste will then seriously damage the marine environment, said Clinton Vaz.

Stressing on the importance of collecting waste from the beaches, Mr Vaz added that the tourists, residents and the government of Goa need to understand that it is still easy to collect the trash from the beaches but once it goes into the sea, it goes out of our reach to affect marine life. 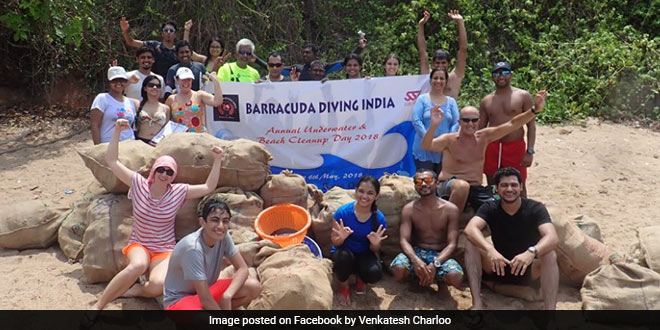 In three hours, 25 volunteers pulled out 27 bags of waste from the beach, pathways and rain gullies

Mr Vaz highlighted that of the 900 kg of waste collected from the beach, pathways and rain water gullies of the Grande Island on May 7, more than half was glass, the leftover by careless picnickers. He asserted that the island is beautiful and the tourists should understand that once the island will get dirty with full of trash, then they will only not feel like visiting this place again.

When asked about the condition of the island in terms of waste littered around, Mr Vaz said:

On a positive note, there was less waste as compared to last year. The underwater litter was also much less. Thanks to that, we were able to clean a larger area beyond the beach and puck out waste buried in the foliage and sand for more than five years.

Talking about the Monkey Beach cleanup drive, Mr Vaz said that the citizen volunteer team led by V-Recycle trekked down the steep slope and was shocked to see the accumulated waste on the small beach.

Over four hours of hard work in the scorching heat resulted in the collection of 70 bags of waste comprising 37 bags of beer and liquor bottles, 19 bags of plastic bottles and 14 bags of non-recyclable waste. We found huge amount of waste buried between the rocks at one of the spots, and surprisingly we also found burnt waste and used sanitary pads, he further added.

At the Grande Island, the group collected 83 bags of waste, comprising 45 bags of glass bottles, 26 bags of plastic bottles and 12 bags of non-recyclables.

I was shocked to see that we collected over 80 bags. It looked as if we could have easily gathered hundreds more, said one of the citizen volunteers.

According to Mr Vaz, the underlying purpose of these cleanup drives was to create mass awareness about the importance of keeping Goa clean. “The government should understand that if over 25 volunteers in three cleanup drives can collect 3.5 tonnes of waste then how much waste is lying around. We have been discussing the matter with the government so we can involve all stakeholders to find a solution to reduce the waste generation and maximize the waste collection,” Mr Vaz further added.