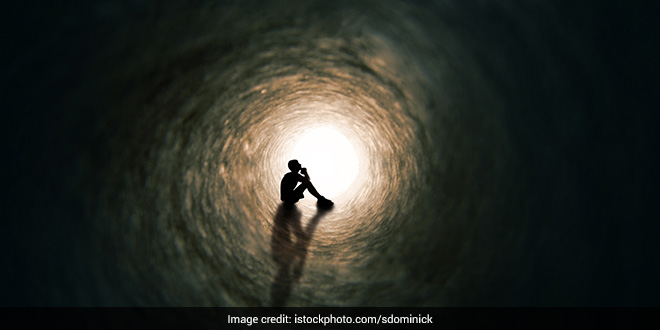 New Delhi: “Mental health includes our emotional, psychological, and social well-being. It affects how we think, feel, and act. It also helps determine how we handle stress, relate to others, and make healthy choices”, says United States’ Centers for Disease Control and Prevention (CDC). The CDC also specifies that although the terms are often used interchangeably, poor mental health and mental illness are not the same. A person can experience poor mental health and not be diagnosed with a mental illness like depression and anxiety.

This year, as we mark World Mental Health Day on October 10, with the theme of ‘Mental Health In An Unequal World’, let’s understand what is a mental disorder, who is at risk of developing one, what’s the burden of mental disorders and where do we stand currently when it comes to addressing the burden.

What Is A Mental Disorder Or Illness?

The term ‘mental disorders’ is used to denote a range of mental and behavioural disorders, with different presentations. They are generally characterised by a combination of abnormal thoughts, perceptions, emotions, behaviour and relationships with others. Mental Disorders include depression, bipolar disorder, schizophrenia and other psychoses, dementia, and developmental disorders including autism.

Who Is At Risk Of Developing Mental Disorders?

The World Health Organisation (WHO) states that the determinants of mental health and mental disorders include not only individual attributes such as the ability to manage one’s thoughts, emotions, behaviours and interactions with others, but also social, cultural, economic, political and environmental factors such as national policies, social protection, standards of living, working conditions, and community support.

The Global Support To Mental Health

As per the WHO, despite progress in some countries, people with mental health conditions often experience severe human rights violations, discrimination, and stigma. Many mental health conditions can be effectively treated at a relatively low cost, yet the gap between people needing care and those with access to care remains substantial. Effective treatment coverage remains extremely low, says WHO.

Also Read: How To Ensure Emotional And Mental Well-being During COVID-19? Expert Answers

The Status Of Mental Health Disorders And Services In India:

1. A study titled “The Burden Of Mental Disorders Across The States Of India: The Global Burden Of Disease Study 1990–2017” released in December 2019 and published in The Lancet Psychiatry has assessed the disease burden of each mental disorder. As per the report, in 2017, there were 197.3 million people with mental disorders in India, comprising 14.3 per cent of the total population of the country. Mental disorders contributed 4.7 per cent of the total DALYs in India in 2017, compared with 2.5 per cent in 1990.

DALYs is a sum of the years of life lost (YLLs) due to premature mortality and the years lived with a disability (YLDs). Let’s assume the average life expectancy in a country is 65 years. Due to a particular disease, some people die at the age of 50 which means they are dying 15 years before they are expected to. Hence, YLLs will be 15 years. There is another disease that affects people at the age of 40 but does not lead to mortality. Here, the disease has affected the ability of a person; YLDs will be 25 years.

Talking about how bad is the current DALYs due to depressive orders, Dr Sagar who is also the first author of the said Lancet report and Chair, Global Burden of Disease (India)-mental health expert group said,

To understand the gravity of the current DALYs, we need to look at the trends in India. Our report has data starting from 1990 and it shows that in 27 years, DALYs has almost doubled and it’s a worrying trend. Also, mental disorders were the leading cause of YLDs in India, contributing 14.5 per cent of the total YLDs in 2017.

2. As per the said report, the highest contribution to DALYs due to mental disorders in India in 2017 was from depressive disorders (33.8 per cent) and anxiety disorders (19 per cent).

4. The economic loss due to mental health conditions, between 2012-2030, is estimated at USD 1.03 trillion, as per WHO. Unemployment is a well-recognised risk factor for mental health problems, while returning to, or getting work is protective, says WHO.

5. WHO also states that the mental health workforce in India is not upto the mark and there is a huge shortage of mental health professionals in the country as compared to the number of people suffering from mental health issues. In India, per 1,00,000 population, there are 0.75 psychiatrists against the desired number of 3 psychiatrists, as per a paper published in Indian Journal of Psychiatry, 2019. 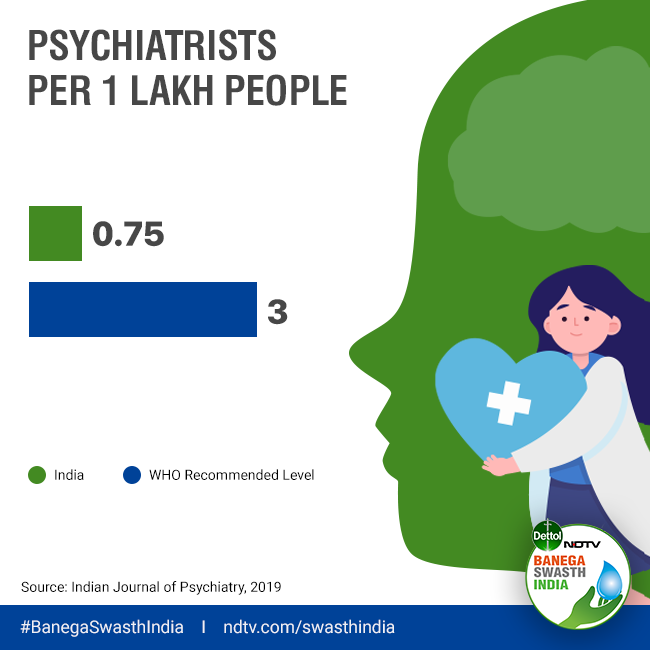 The status of mental health workforce in India

Similarly, there are 0.067 psychologists working in the mental health sector against the ideal ratio of 1.5 per 1,00,000 population. Important to note that though the data was published in 2019 by WHO, for India, the figures are as of 2016. 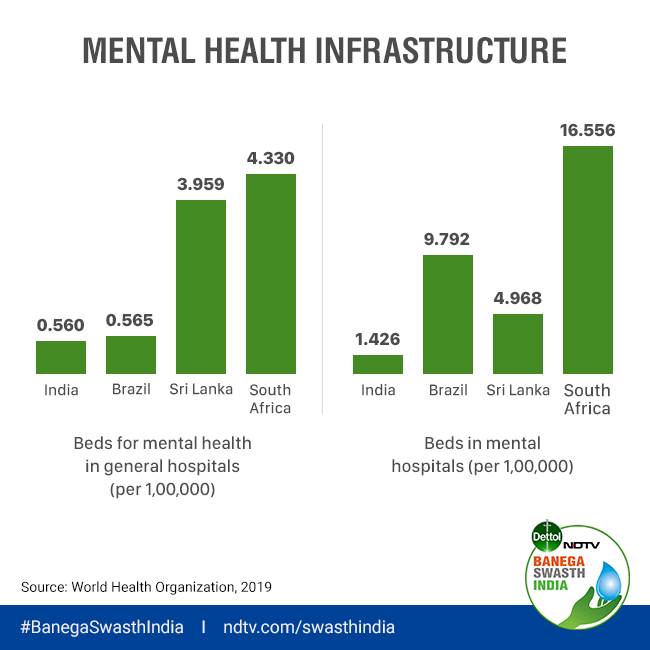 The status of mental health infrastructure in India vs neighbouring countries

According to WHO, the COVID-19 pandemic has disrupted or in some cases halted critical mental health services in 93 per cent of countries worldwide, while the demand for mental health is increasing. Given the chronic nature of the disease, this translates into a significant economic impact worldwide. The data is based on a survey conducted from June to August 2020 among 130 countries across WHO’s six regions and published on October 5, 2020.

30 per cent reported disruptions in to access for medications for mental, neurological and substance use disorders.

Agewell Foundation, India, a not-for-profit NGO which has been working for the welfare and empowerment of older persons of India since 1999 conducted a telephonic survey in June 2021 to assess the impact of the second COVID wave on elderly. The researchers interacted with 5,000 elderly respondents over the phone in different parts of the country. Anxiety, sleeplessness, lack of appetite and lack of physical activity was termed most critical health challenge according to 34 per cent respondents.

By ensuring right treatment, we will significantly reduce suicidal attempts and suicides. By ensuring timely treatment, we will ensure that the cost factor, whether it’s an organisation or an individual – the loss of opportunity and the struggles – they will be largely reduced. We need to end the stigma and talk about mental health in a sensitive, compassionate and corrective manner. We can use digital India to have last mile reach because we have a shortage of experts in our country but if we utilise our digital interface, we will be able to make an impact and ensure that the vulnerable people who need help, get that.

If you need support or know someone who does, please reach out to your nearest mental health specialist. Helplines: