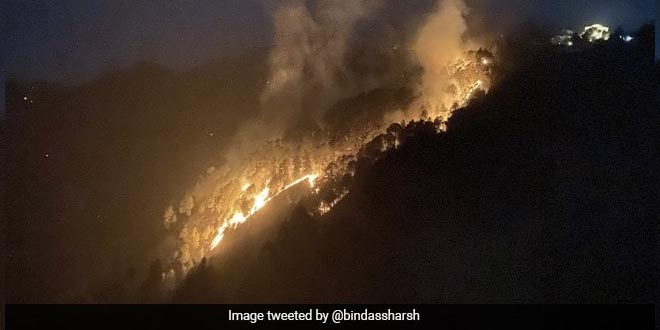 Areas once considered safe from major fires won't be immune, including the Arctic, which the report said was very likely to experience a significant increase in burning

New Delhi: Wildfires have intensified around the globe and it will only get worse, said the UN Environment Programme (UNEP) in a new report released on Wednesday (February 23). The report highlighted that the incidences of fires have increased greatly over the few years in many countries including India.

The report, Spreading like Wildfire: The Rising Threat of Extraordinary Landscape Fires, by UNEP and GRID-Arendal, a non-profit organisation based in Norway, finds that climate change and land-use change are making wildfires worse and anticipates a global increase of extreme fires even in areas previously unaffected.

Also Read: Here Is All You Need To Know About Wildfires

According to Andrew Sullivan, Scientist, Commonwealth Scientific and Industrial Research Organisation, Australia, who is one of the report’s authors, uncontrollable and devastating wildfires are becoming an expected part of the seasonal calendars in many parts of the world. He said,

We have seen a great increase in recent fires in northern Syria, northern Siberia, the eastern side of Australia, and India. Although the situation is dire and eliminating wildfire risks is impossible, communities can still reduce their risk and exposure. Where wildfires have historically occurred, they may increase; however, where wildfires have not historically occurred, they may become more common.

He added that extreme wildfires can be devastating to people, biodiversity and ecosystems. They also exacerbate climate change, contributing significant greenhouse gasses to the atmosphere, he said.

Peter Moore, Food and Agriculture Organization (FAO) of the United Nations and a contributing author of the report added that uncontrollable and unusual wildfires have long term impacts on the people- socially, economically and psychologically.

Here are some of the major highlights of the report:

How To Curb The Worsening Fire Risk?

According to the report, there is a need for a radical change in government spending on wildfires, shifting their investments from reaction and response to prevention and preparedness. Currently, direct responses to wildfires typically receive over half of the related expenditures, while planning receives less than one per cent. The UNEP calls for adopting a ‘Fire Ready Formula’ according to which, two-thirds of spending to planning, prevention, preparedness and recovery, with only a smaller percentage put toward a response to damages and losses. Inger Andersen, UNEP Executive Director said,

Current government responses to wildfires are often putting money in the wrong place. Those emergency service workers and firefighters on the frontlines who are risking their lives to fight forest wildfires need to be supported. We have to minimize the risk of extreme wildfires by being better prepared: invest more in fire risk reduction, work with local communities, and strengthen global commitment to fight climate change.

To prevent fires, the report calls for a combination of data and science-based monitoring systems with indigenous knowledge and for stronger regional and international cooperation.

We must work with nature, communities, harness local knowledge, and invest money and political capital in reducing the likelihood of wildfires starting in the first place and the risk of damage and loss that comes when they do, the report said.

BA.2 Sub-Variant Of Omicron Is More Transmissible Than BA.1, But Not More Severe, Says WHO