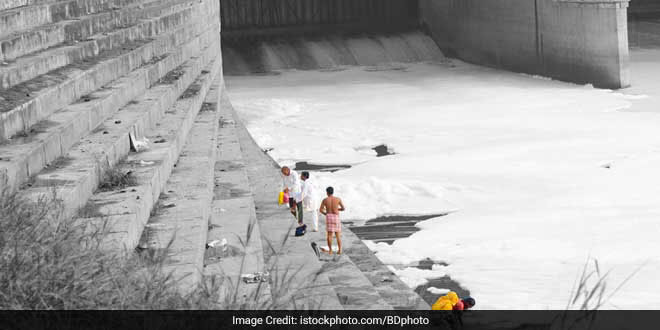 New Delhi: It is hard to ignore the strong stench that fills the air while driving across the Yamuna in Delhi—a regular route for thousands of people in the Capital. The cause? Gallons of untreated, unfiltered sewage that makes its way into shallow waters of this dying river every single day. According to estimates made by the Central Pollution Control Board (CPCB), Delhi generates 3,800 million litres of sewage per day. More than half of this amount does not receive any sort of treatment and is allowed to flow into the Yamuna, unchecked.

Read More: How The Yamuna Went From One Of India’s Holiest To One Of World’s Dirtiest

What is truly troubling about this situation is that Delhi actually has the capacity to treat much more sewage than it is presently treating. In fact, according to a 2013 CPCB report, Delhi has the as the highest capacity of sewage treatment among India’s metropolitan cities.

“We currently have the capacity to treat 604 million gallons (2,290 million litres approx.) of sewage per day. At present, we are able to treat 450 million gallons (1,700 million litres approx.),” says RS Tyagi, Member and Engineer-in-Chief of the Delhi Jal Board, the agency responsible for the construction and maintenance of sewage treatment plants, treatment of domestic sewage and sewage-pumping stations and trunk sewers in the capital. 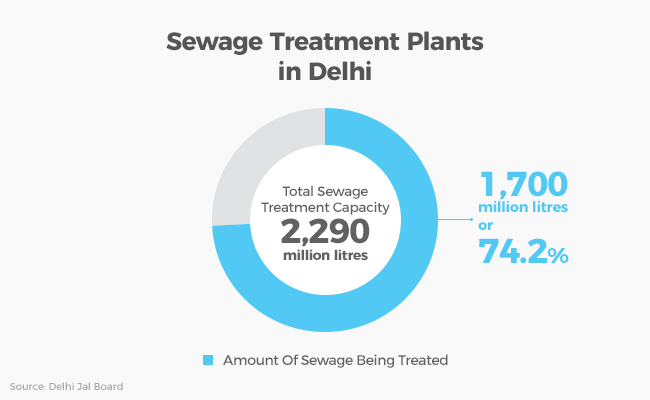 This means that only 44 per cent of the city’s sewage receives any kind of treatment and another 30 per cent which could be treated, is not.

CPCB data reveals that of Delhi’s 30 sewage treatment plants, 20 run under-capacity and 3 are not functional. Moreover, 5 of the operational plants run overcapacity. This too can pose a problem by lowering the quality of treated water which leaves the plant. 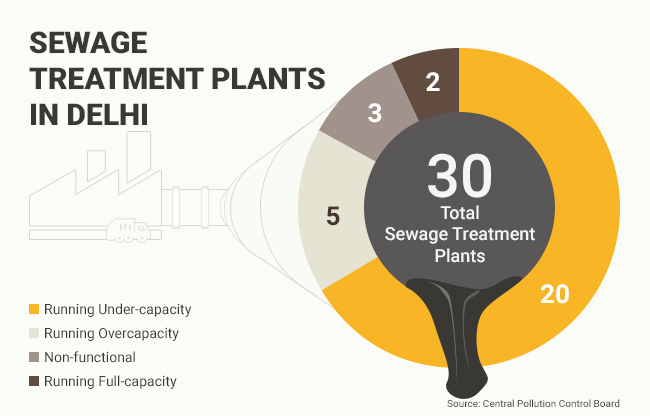 So why are Delhi’s sewage treatment plants running under capacity?

“There are two problems. In some cases, while the treatment plants exist, the infrastructure to actually get the sewage to them is not present. In other cases, operational problems persist. Either they (the sewage treatment plants) don’t have the funds or they don’t have enough power to operate. This means that either the sewage is just not treated or it is not treated to optimal environmental standards,” explains Puneet Srivastava, Manager-Policy, WaterAid India.

Similar reasons are echoed by Mr Tyagi who blames inadequate sewerage infrastructure. Simply put, there are not enough pipelines to bring all the sewage Delhi generates to these treatment plants.

However, the Delhi Jal Board is positive that the situation will improve in a few years. This optimism is based on the execution of the Delhi Jal Board’s ‘Sewerage Master Plan for Delhi-2031’ which details plans to build up the city’s sewerage cover and connect them with sewage treatment plants and augment the treatment capacities of existing plants. And according to Mr Tyagi, significant progress has already been made.

“Based on the Master Plan, we have already completed laying out (sewerage) lines in 294 colonies and work is going on in 295 other colonies,” he says.

Of course, connecting the entire city to the sewerage system and ensuring that all the liquid waste generated reaches treatment facilities is huge challenge considering the fact that an estimated 45 per cent of the city lacks access proper sewage disposal and drainage systems. However, if we wish to make any progress in the mission to rejuvenate the Yamuna this is the most important step.

Will The Swachh Campaign Finally Tackle The Scourge Of Manual Scavenging?