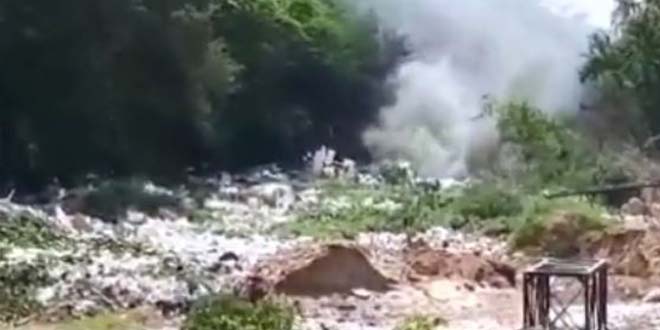 ‘No problem, it happens every year,’ Karnataka Chief Minister Siddaramaiah’s response to the recent flowing of toxic foam in Bengaluru’s Varthur Lake, sums up the nonchalance with which the issue is being looked at.

Once known as a city of beautiful 105 lakes, Bengaluru’s waterbodies are becoming toxic storehouses of industrial waste and garbage. Moreover, the lakes are spilling toxic foams and smoke every now and then, resulting in severe environmental damage to the city. If Bellandur was in news for toxic foams earlier this month, it was Varthur lake on Monday, which emitted toxic froth and was up in fumes a day later.

People driving around the Whitefield road in the city came across toxic froth on Monday, along with severe stench. Environmental experts deduced that the arrival of rains in the city has resulted in massive frothing, as the lake itself was filled with pollutants due to disposal of industrial waste and sewage. Adding to the problem, a section of the garbage near the lake at Munnekolala was reportedly set on fire a day after the massive frothing. Thick smoke covered the lake, bringing back memories of the Bellandur incident few months back.

Even firefighters had a difficult time controlling the fire, as they were stunned by the extent of the flames in the lake. The presence of oil and phosphorus in the garbage in the lake resulted in spreading of the fire, similar to Bellandur where the presence of pollutants resulted in the eruption of a massive fire.

Nearly 98 per cent of Bengaluru’s 105 lakes have been encroached upon and 90 per cent of them are reeling under the problem of severe pollution due to disposal of untreated industrial sewage. Excessive urbanisation, along with the apathy of civic bodies has resulted in Bengaluru lakes being in severe crisis. The Bellandur lake witnessed a fire outbreak due to methane formation in February 2017. It was not long before the National Green Tribunal (NGT) took the matter in its own hands, ordering the shutdown of industrial units near Bellandur lake and ordering all concerned bodies to monitor the rejuvenation of the lake.

While the state government is rushing against time to clean up the Bellandur lake, the developments surrounding Varthu, show that as long as encroachment and sewage disposal are not checked, lakes in Bengaluru will be at risk of emitting toxic froth and fumes. Despite the Karnataka Chief Minister’s assurance that the Varthur lake problem will be resolved, what really needs to be checked is the disposal of sewage in the lake itself. Similar to Bellandur, a strict imposition of fines for anyone dumping waste in Varthur, along with security features will ensure that disposal of waste in the lake is discontinued.

We are monitoring the situation in Varthur. We will clean the lake in coordination with the state government, as we are doing for Bellandur. We will also investigate the causes behind the froth and the fire, said S. Shanthappa, Member Secretary, Karnataka State Pollution Control Board.

Sewage disposal is the key to rejuvenating Bengaluru’s lakes. The civic authorities can learn from the rejuvenation of Jakkur lake, one of the city’s cleanest waterbodies. The lake allows disposal of properly treated liquid sewage, resulting in balanced water levels in the lake. The groundwater levels in the surrounding areas of Jakkur lake have also gone up significantly. Varthur and Bellandur lakes should be equipped with similar mechanisms post their cleanups to ensure that incidents of frothing and fuming can be avoided in the future.