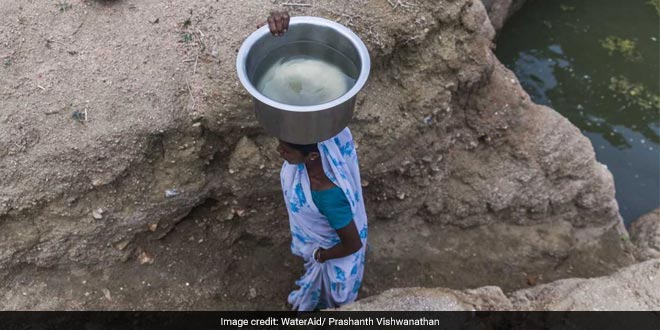 New Delhi: NITI Aayog’s recent report titled, ‘Composite Water Management Index’ (CWMI), a tool to assess the performance of water resource management, has ranked all states through first of its kind index on composite water management. The index comprises nine themes covering ground and surface water restoration, irrigation management, watershed development, water supply, governance and so on, wherein a weight is attached to each theme depending on its importance. The themes are further divided into 28 indicators with an aim to cover the complete scenario of water situation in the country.

The report has ranked Gujarat as the top performer in the Water Index scores for 2016-17 and lauded its performance under various indicators where it has outperformed the other 23 states. While, the coast may be clear for Gujarat, Madhya Pradesh and Andhra Pradesh, it might not be the same for most of the North Eastern and Himalayan states like Meghalaya, Uttarakhand, Nagaland and Assam, who have disappointingly scored the least among all 24 states ranked in the CWMI. Also, as Himachal Pradesh was considered under the Himalayan States category, it has scored well but if we are to consider the all India ranking, it is also an average performer.

Also Read: Five Things India Should Do To Avoid A Water Crisis

Overall, the report shows a dismal performance of the Himalayan and North Eastern states across most of the 28 indicators. The report brings to light the meagre use of restored water bodies for irrigating land, probably because community engagement in restoration of traditional water bodies such as guls, naulas, dharas, lakes, has been declining.

Even the states’ performance in coverage of micro-irrigation systems in irrigated land is extremely poor across the region with Tripura and Sikkim being the only ones with more than 10 per cent coverage, while the largest state, Assam, having negligible coverage. Further, all North-Eastern and Himalayan states, except Himachal Pradesh, have coverage rates of 60 per cent and less for drinking water supply in rural areas. However, urban drinking water supply coverage is comparatively better than the rural with Himachal and Tripura providing supply to almost 100 per cent urban population. Lastly, Sikkim is the only Himalayan state that treats more than 80 per cent of its urban waste water, while for others it is as low as zero to 47 per cent.

Encouragingly, the indicators suggest that these states do not have any over-exploited or critical groundwater units (except Himachal Pradesh and Uttarakhand) and have achieved 100 per cent reduction in rural water-quality incidents in FY 2016-17 (except Nagaland, HP, and Assam).

The problem, therefore, in these states is basically of low restoration of water bodies, reduced adoption of micro irrigation system in agriculture, lack of initiative to construct or rejuvenate water harvesting structures, small coverage of water supply to rural areas, and failure towards actual treatment of waste water. Being rich in natural resources especially water and forests with many glaciers, rivers, dense forests and snow-clad mountain peaks, these resource rich states have had conventionally/ naturally high water availability in their region which has subsequently reduced the necessity for water management and required policy action. Moreover, the weak water conservation measures are also indicative of limited availability of monetary resources which are often capital-intensive programmes involving reasonable upfront cost for construction and maintenance.

Since the beginning of this century, it has been witnessed that climate change, together with other drivers, is having a profound impact on water accessibility, people’s vulnerability to water-induced hazards, and socio-economic condition of communities in the Indian Himalayan Range.

The region has a large part of the annual precipitation falling as snow, particularly at higher altitudes. Climate change is affecting the amount of snow, ice, and rainfall patterns thereby causing shorter period of snowfall which prevents the snow from turning into hard ice crystals. Therefore, more of the glacier is liable to melt when the summer comes. The impact of anthropogenic climate change makes it imperative to understand these alterations, the implications it has for downstream water availability, and also its impact on livelihoods.

Climate change impact over the Himalayan states was more than evident this summer when two tourist towns Shimla and Mussoorie of Himachal Pradesh and Uttarakhand  respectively were in news, not for drawing the tourists but for urging them to stay away due to water scarcity, which now is a recurring phenomenon.

The reason cited for the crises in Mussoorie, Uttarakhand, by Jal Sansthan (Water Works Department), is the lack of winter rainfall and snow, which could not keep the waterfalls and springs replenished, severely crippling water supply. Shimla in Himachal Pradesh, too, grappled with the same situation and assigned the dry spell of winters as the reason behind low water table.

However, the authorities failed to look at alternate sources of water (like recycling waste water or use of grey water for kitchen gardens and irrigation) when they already had access to information regarding low winter precipitation that year.

To tide over the crises, the Himachal Pradesh government and the Shimla Municipal Corporation (SMC) swung into action by arranging water tanks and regulating tourist inflow in the town. Little did they realise that if they had paid heed to the letters being issued on behalf of Government of India, since 2004 to the departments, concerned for augmenting sources of water and enforcing rainwater harvesting system, the crises could have been delayed or even averted.

Going forward, some major recommendations for the Himalayan and North Eastern states in this direction includes: mobilise community participation in management of water resources by measures ranging from reviving, maintaining and monitoring water bodies, water recharge by developing a decentralised recharging infrastructure, encourage communities, organisations and households to collect and store rainwater, explore irrigation opportunities through restoration of traditional water bodies or watershed management, accelerate adoption of micro-irrigation for improving water-efficiency in agriculture, and opt for decentralised waste water treatment to both meet the growing demand due to rapid urbanisation and enable reuse of water.

Nirma Bora is the Policy Research & Advocacy Officer at WaterAid India. With over 6 years of experience, she has worked extensively on issues related to climate change, sustainable agriculture and water resource management.

Say No To ‘POP’ Please! Five Eco-Friendly Ganesh Idols To Opt For This Ganesh Chaturthi