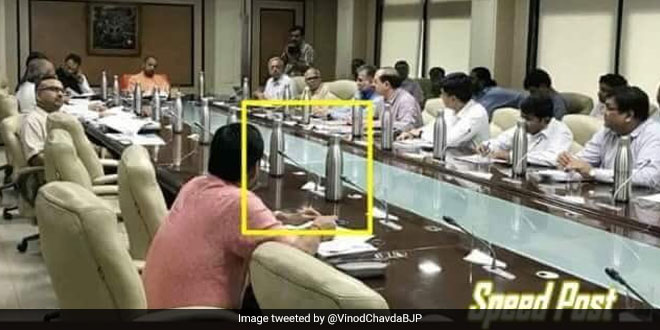 New Delhi: Ten days after India’s most populous state Uttar Pradesh banned plastic for the fourth time on July 15, Chief Minister Yogi Adityanath has banned the use of plastic water bottles at his state secretariat office. The state has failed thrice before in implementing the plastic in 2015, 2016 and 2017. Poorly structured laws and even weaker implementation had resulted in the past failures. This time while announcing the plastic ban, Uttar Pradesh’s Chief Minister appealed the cooperation from every individual to enforce the plastic ban effectively.

Chief Minister Yogi Adityanath demanded to stop the usage of single-use plastic items in the official meetings at the secretariat. The Chief Minister wanted to mark the beginning of war against plastic pollution from his office and home. To start with, we replaced the plastic water bottles with the steel bottles at the Chief minister’s ‘pancham tal’ or fifth floor annexe office from July 24. In the next ten days, we aim to completely replace the plastic bottles with other eco-friendly options at the Secretariat.

Member of Parliament Vinod Chavda also took to Twitter to welcome CM Yogi Adityanath’s decision to ban the use of plastic water bottles during the meetings, and allowing water to served using steel thermos flasks.

“Chief Minister Yogi Adityanath has even asked to stop the usage of plastic bottles at his official residence at 5-Kalidas Marg in Lucknow. The government has taken the decision to ban plastics in the state, which generates over 360 tonnes of plastic daily, and we all should… both at government and public level take initiatives to discard the use of plastics. Everyone’s participation is all it takes to win the war against plastic pollution. Taking a cue from the Chief Ministers, the officials have also started shunning the use of plastic items in their meetings at the secretariat,” added Mr Prasad.

Also Read: Make Way For Roads Made Out Of Plastic Waste In Uttar Pradesh

Notably, Chief Minister Yogi Adityanath, who has declared a war on plastic, has also initiated some measures to reduce the use of plastic by making alternatives more accessible to people. One such measure is setting up a Pottery Board, which aims to revive pottery and handcrafted earthenware. The board will monitor the setting up of earthenware industries, give rapid clearances to them and promote the use of earthenware among people. In line with this concept, the state government in their political rallies has started using earthen pots or paper glasses to serve water instead of plastic water bottles or plastic glasses.

In its war against plastic pollution, it will be crucial to see if Uttar Pradesh will be fourth time lucky in effectively imposing the ban on plastic, given it is India’s most populous state – home to 220 million people.