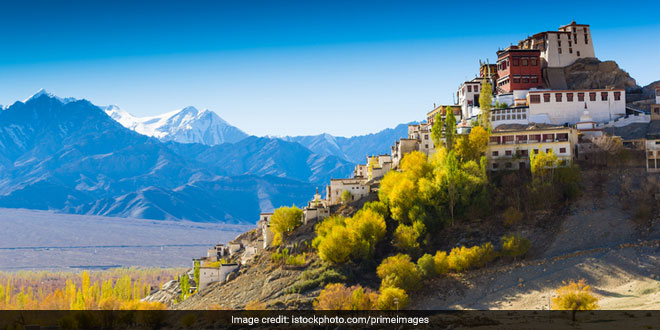 Mumbai: Leh in Jammu and Kashmir draws multitudes of visitors from across the country and the world, who are eager to experience its inimitable culture and breathtaking mountainous landscape. However, not many are aware of the worsening situation of the ‘Bomb Guard’ landfill near Diskit Tsal, where all the garbage from Leh is dumped. The authorities have failed to tackle let alone acknowledge the heaps of garbage accumulated on the landfill since the last 15-20 years. In a bid to reverse this crisis and free the landfill from waste, the Leh administration will get an innovative technology titled ‘BlackHOLE’ next month.

Just like theory of black hole which states that a strong gravitational force can swallow up the entire Earth, this machine will swallow the garbage. After a few officials from a private company presented us their machine, we decided to procure it to unburden the Leh landfill. The machine will be procured at one crore rupees and will be installed near the Bomb Guard, which was once used by the army as an ammunition depot, Deputy Commissioner Avny Lavasa tells NDTV.

When asked by when the garbage from the landfill will be cleared Ms Lavasa says, “Since it is impossible to calculate the amount of garbage that exists on the landfill, it is difficult to estimate a time as to when all the landfill waste will be removed.”

How Does The BlackHOLE Function?

The cost-effective machine, designed by Tesla Energy, uses super plasma heat technology that decomposes non-biodegradable waste into ceramic ash without any requirement for fuel or electricity. Except for glass, all kinds of dry waste including plastic, thermocol and paper can be deposited in the machine.

“The machine does not require higher temperatures as it has the unique feature of Plasmic Decomposition,” says Ms Lavasa.

The machine can convert up to one tonne of garbage into 20 kilos of dry ash within 24 hours. The administration has made a deal with the Border Roads Organisation who will use the ash to lay roads. The sanitation workers will be given training on its operation and maintenance.

Leh has witnessed a significant rise in local and international tourists in the last four to five years. The pristine beauty of the region which attracted around three lakh tourists in 2012 almost doubled during summers this year. With an increase in tourism, the issue of garbage has also escalated points out Ms Lavasa.

Among the 15 tonnes of garbage that is generated daily in Leh, 90 per cent of it comes from tourists. The locals have the primary habit of segregation and hence the dry waste is sold to recyclers and wet waste gets composted by the houses. We have planned to go step by step in tackling Leh’s waste generated by tourists and the BlackHOLE innovation is our first step, adds Ms Lavasa

In Leh, more than managing the waste, it is the transportation aspect which is a herculean task.

Presently, most of the waste generated by the tourists in Leh gets dumped at the Bomb Guard landfill located on the outskirt of the district. Because it is a cold-hilly region, it becomes difficult to transport the waste from one place to another especially when it snows. Roads get blocked and thus the administration has no option but to let the waste accumulate in open dumping spots, points out Ms Lavasa.

In order to overcome the challenges, the administration is coming out with several solutions. For instance, to tackle the waste, the administration is setting up nine segregation centres across the district. The waste generated by the tourists is directly transported to the landfill at present. Once the segregation centres are ready it will be taken there. The dry waste will be reused or recycled and wet waste will be bio-composted.

A bio-composting machine will be set up soon and all the biodegradable waste will be converted into manure. As for the dry waste, it will be recycled. For example, the plastic will be given to the Border Roads Organisation to lay roads. Paper and cardboard will be turned into pulp to make bricks which can be used as fuels in winters, adds off Ms Lavasa.

Ms Lavasa said preventing waste and the work for restoring the beauty has to be a two-way street. While the administration can bring in the necessary infrastructure, ultimately it is the tourists who have to behave responsibly and ensure that region is not ruined by their reckless acts of littering.

Related Topics:
Jammu and Kashmir Waste Management
Up Next

Hyderabad’s New Project Will Build Over 50,000 Household Toilets To Ease Pressure On Public And Community Toilets