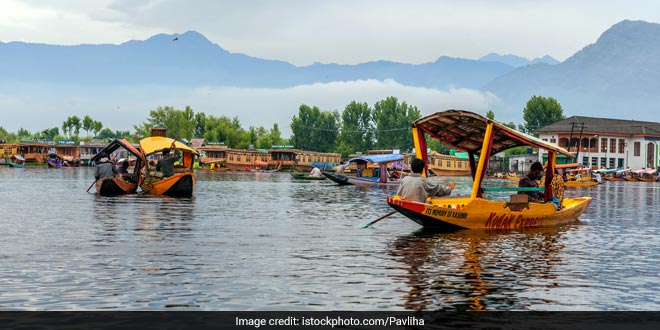 Jammu: The Jammu and Kashmir government will procure weed harvesters, skimmers and amphibious excavators to give a new lease of life to the famous Dal and Nageen lakes battling the menace of weeds. Dal Lake is situated in Srinagar–summer capital of Jammu and Kashmir. The urban lake is the second largest in the state and is integral to tourism. It is called the ‘Jewel in the crown of Kashmir’. Nageen Lake is a mildly eutrophic lake located in Srinagar. It is sometimes considered a part of the Dal Lake and is connected to it via a narrow strait.

Also Read: 87-Year-Old Woman Becomes Jammu And Kashmir’s Swachh Mascot For Constructing A Toilet All By Herself

The housing and urban development department of the state government has issued orders for floating of global tenders for procurement and hiring of 60 machines and boats by Jammu and Kashmir’s Lakes and Water Ways Development Authority (LAWDA) by March, 2019, an official said.

LAWDA should procure lake clearing machines for the current year in order to conserve Dal and Nageen lakes, said K B Aggarwal, Financial Commissioner, Housing and Urban Development Department. The procurement of lake clearing machines and equipment for four basins of Dal and Nageen lakes through global tendering include eight weed harvesters along with barges, eight skimmers, eight amphibious excavators, 12 tugboats and 24 barges, he said.

The twin lakes of Dal and Nageen are facing a life battle of high growth of weeds, causing concern among the people, particularly the environmentalists. A Rs 38-crore proposal for construction of a road through the interior of Srinagar aimed at conserving the famous Dal Lake has been submitted to the Jammu and Kashmir government this year, an official said.

As part of the efforts to conserve and protect the Dal Lake, the Centre and state governments have launched several schemes and projects over the past decade. These include shifting nearly 10,000 families living around the lake to a colony being established at Rakh-e-Aarath in the outskirts of the city.

So far, we have shifted 2,200 families. Allocation of funds is very important for speeding up the moving of the families from Dal Lake to other designated places, a senior official said.

The physical and chemical analysis of the lake water is done every month as made mandatory by the Jammu and Kashmir High Court, which is monitoring the conservation efforts.

LAWDA has demolished 75 structures and removed encroachments in 56 demolition drives in the past six months. The Dal Lake, nestled in the northeast part of Srinagar city and spread over 21.1 sq km, is at the heart of the region’s tourism industry and is linked to the livelihood of thousands.

The lake has suffered extensively over the past few decades due to increasing encroachment, human interference, pollution and a failure of successive governments to implement remedies. The first conservation and management programme costing Rs 298 crore was sanctioned under the National Lake Conservation Plan (NLCP) in 2005.

The second phase of work done under the programme costing Rs 356 crore was sanctioned under the Prime Minister’s Reconstruction Programme (PMRP) in 2010. Satellite imagery in 2009 revealed that the total area of the lake was 25.76 sq km.

Related Topics:
Cleanliness Jammu and Kashmir Water Pollution
Up Next