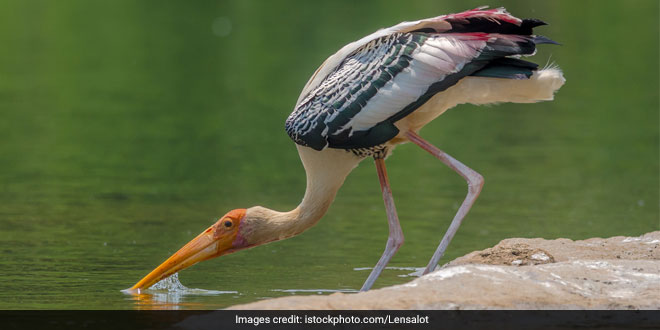 New Delhi: Amid the bustle of south Delhi‘s urbane surroundings, the Neela Hauz biodiversity park, comes as a soothing sight. The clean water body and the lush green landscapes that one sees today was earlier a stench emanating dumping ground for construction material and sewage water. Caretakers at the site claim that it attracts a large number of tourists on daily basis in winters. Though the descending path towards the lake has been barricaded for safety of the visitors, one can witness the clean water body that is the result of three years of rejuvenation project. The desilting from the lake was used for the landscaping in the area and creation of mounts that offer a picturesque view of the area. The rejuvenated site has been fully operational for around two years now.

Once a natural water body, Neela Hauz supplied drinking water to the areas in south Delhi. However, with rapid urbanisation, the catchments that used to supply water to the lake dried up. Subsequently, sewage water from the various unauthorised colonies started their discharge into the lake. What worsened the situation was the construction of a bridge on the Aruna Asaf Ali Marg, just above the lake, as part of the infrastructure projects during the 2010 Commonwealth Games. The construction debris was dumped into the lake, forcing the local residents to approach the Delhi High Court.

The court handed over the area to Delhi Development Authority for the lake’s revival. After an unsuccessful attempt to breathe life into the dead water body, the project was then carried out by the DDA in collaboration with the Centre for Environmental Management of Degraded Systems.

Within two years, the lake was desilted and the debris was used for embanking and landscaping. C.R. Babu, professor emeritus, Delhi University and the head of Centre for Environmental Management of Degraded Ecosystems said,

A constructed wetland system alongside the lake, which treats around million litres of water daily, treats the sewage water entering the lake. Just before the water enters the lake, it flows past a series of alternating troughs and gravel beds with aquatic plants growing on them.

He added that no pumps are being used for the treatment process of the sewage water and it is being carried out through natural processes using constructed wetland system on the site. The constructed wetland system comprises two open oxidation ponds, three physical treatment plants and furrows and ridges. The landscape now boasts of over 15,000 plants of 25 species.
Stretching at an area of 3.9 hectares, the Neela Hauz biodiversity park is one-of-its king model project that could be completed within a span of just three years, Professor Babu claims. He said that the site now attracts not just a large number of tourist but birds too. He said,

Around 300 birds were spotted at the site, belonging to nearly 17 species.

He added that the revival of the dead Neela Hauz lake project, which was completed in 2016, has become a talking point internationally. University of Guelph, Canada has expressed its interest to collaborate with the brains behind the successful restoration of the Neela Hauz biodiversity project. Apart from this, students from Harvard University are set to visit the Neela Hauz site in August.

In Leh, Tree Plantation Drive To Stem Spike In Pollution