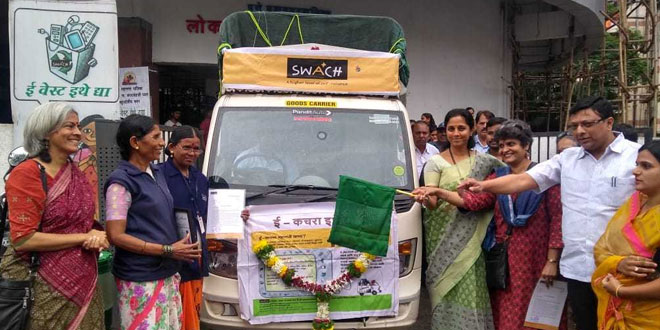 Mumbai: Chitra Mahajan, a resident of Pune’s Dhankawadi locality was apprehensive as she made her way to the recycling centre near her house. On her journey back home, Chitra was filled with a sense of pride and smiled all along while glancing at her certificate. She wasn’t the first person to receive a certificate on depositing electronic waste. Many others, in the last one year at Dhankawadi have received it. The custom of issuing a certificate every time someone deposits an electronic waste item was started by SWaCH to incentivise people to give their e-waste to the right disposal mechanism.

The recycling centre was set up at Loknete Sharadchandra Pawar Bhavan Multipurpose Complex. The purpose was to collect all the electronic waste from the city and then give it to the local recyclers who would further recycle it. SWaCH adopted two ways to accomplish the task. One was through its waste picking battalion. As the waste-pickers are familiar with the households they pick up waste from, they informed the residents about the new initiative.

The residents were requested to keep their electronic waste aside and either give it to the waste pickers while giving the household waste or visit the centre and deposit it there. Waste pickers from the organisation visit six lakh households daily in the city to collect garbage. Once all the garbage is transported to the waste centre, the waste is segregated by the waste pickers. The electronic waste is kept separately at a designated spot which is further given to the authorised recyclers who ensure it is processed properly.

As the waste picker’s cooperative is a non-profit organisation they came up with the idea of issuing a certificate instead of giving money in return.

A certificate will give them a sense of accomplishment and remind them that they contributed towards protecting the environment. Thus, we came up with the idea of certificates, says Suchismita Pai, Outreach Head of SWaCH.

In order to encourage people about depositing their electronic waste awareness drives were carried out by the volunteers and waste pickers. Ill-effects of dumping wires, phones, computers, TVs, etc on landfills were told in the rallies conducted for the residents.

Electronic waste is the fastest growing waste considering the affordability and accessibility of electronic gadgets. These kinds of waste are worse as they do no biodegrade thus releasing leachate and other toxic chemical in the air, says Suman More, President SWaCH board.

In last one year, the one-of-its-kind facility which functions 24×7 has managed to divert nearly 1,000 kilos of e-waste from the grey market and ultimately, the Uruli landfill. The waste collected at the centre is now being dismantled and segregated further which will later be put up for auction.

Compared to other wastes, e-waste is safer when touched with bare hands unless it is dismantled completely. The discarded electronic items are segregated into different categories like phones, wires, CDs, chargers, etc. At the end of every month we invite e-waste recyclers who are authorised by the MPCB and sell the waste via auction. We barely recover costs of transportation, storage and other logistics, but it needs to be done as this is the fastest growing pollution monster and needs to be dealt with, says Ms More.

Flagging off the last lot of e-waste for this year at the year-end celebration of the facility, Supriya Sule, member of Parliament under whose direction the project was executed, expressed the hope that the next year would bring more awareness to this fastest growing waste menace and that the centre would enable more people to divert unwanted e-Waste safely.

Such initiatives help nip the problem in the bud, before it becomes a huge issue, she said urging everyone to recognize of the importance of municipal e-waste management.

From Pencils And Notepads To Rakhis, Here’s How This Duo From Tamil Nadu Is Making Plantable Products