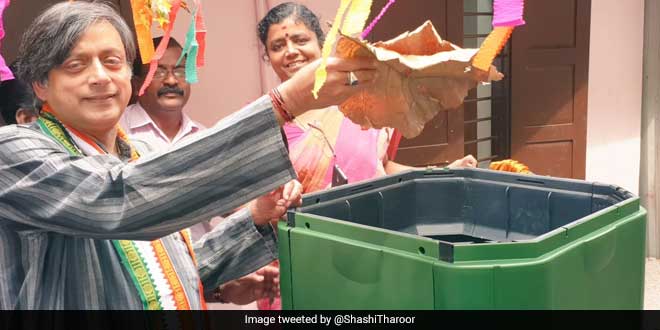 While at Peroorkada Government Girls’ Higher Secondary School I was proud to launch a project of a composting aerobin to help waste management. Designed in Australia and made in India, it processes leaves, wood and paper, Member of Parliament from Thiruvananthapuram said in a tweet along with posting pictures of the launch.

“Thiruvananthapuram’s long and eventful journey for a proper waste management system is coming to a full circle with the new aerobins,” he further added.

The aerobin, which costs up to Rs 10,000 will be used for the first time in Kerala and based on the impact of the bin at the Peroorkada school, more bins will be installed across the city. For now, several bins have been given to Thiruvananthapuram Municipal Corporation (TMC) and Thanal NGO to test the aerobin. Thanal is a public interest research, advocacy, education and action group based in Thiruvananthapuram that trains people on community waste management)

Concerned about the open burning of waste, Mr Tharoor studied several eco-friendly models of processing waste being used across the world that dealt with waste management and finalised the aerobin system.

It comes in three different sizes – 200, 400 and 600 litres. Fortunately, the device, though designed by an Australian company, is manufactured in India for export purposes.

According to Mr. Tharoor, aerobins are more effective as unlike the conventional composting units that can only process wet waste, aerobin can treat all kinds of waste including food, lawn clippings, green garden cuttings, leaves and small twigs, crumpled newspaper and roots or branches.

It is user-friendly as all one has to do is feed the waste from the top and the compost will be extracted from the bottom. No turning of biomass is necessary. Besides, it also lowers Greenhouse Gas emissions. It has a provision to collect leachate, liquid that percolates from waste. This leachate can be used as a valuable liquid fertiliser that can give plants a quick boost of nutrients.

It is also vermin resistant meaning that it will prevent pests or to spread diseases or destroy crops or livestock. Heat generated through micro-organic activity in aerobin raises the temperature in the main compartment of the bin. This kills most weeds, weed-seeds and disease-carrying micro-organisms associated with the decomposition of organic material like lawn clippings, leaves, corn stalks and straw, manures and sludges.