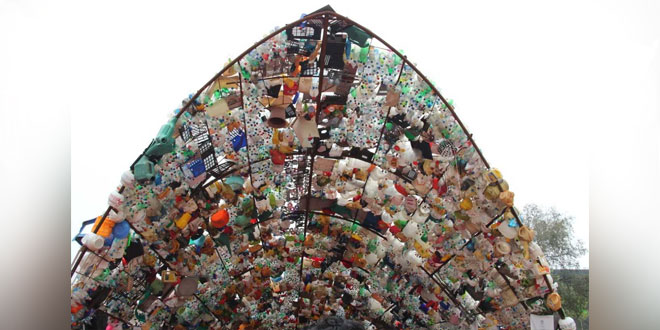 New Delhi: ‘Are we creating cities of waste?’ With this question in mind, IAmGurgaon, an initiative aimed at awakening a responsible, aware and vigilant populace in order to make Gurgaon (now Gurugram) a better place to live in along with Municipal Corporation of Gurgaon and ArtPilgrim Live, an art gallery in the city, initiated ‘Where does it go?’. The campaign titled ‘Where does it go?’ focusses on building awareness around the growing mountain of waste and how it is impacting us and our environment through the medium of art.

As part of the initiative, Wazirabad Bundh in Sector 43 of Gurugram was selected to be renovated. Once a barren land, now hosts 11 immersive sculptures made using different kinds of waste including plastic bags, PET bottles, cans, discarded plastic containers, and e-waste like CDs, over a period of 10 days.

Talking to NDTV about the initiative, Nidhi Kankan, volunteer at IAmGurgaon says,

We tend to throw everything once it is of no use to us. Finished a packet of chips? Toss it in the bin. Have an empty PET bottle? Put it in the garbage. We throw bit by bit and don’t realise the amount of plastic waste we generate in a day, week or month. The initiative aims at showing people the mirror.

Arun Kumar HG, a renowned artist along with 12 local artists, participated in the waste management and awareness activity. Each of the art installations communicates a message on the impact of waste we generate, and the need to segregate waste.

For instance, ‘the toxic chamber’, a large cave like structure, created by artist Arun Kumar, is a functional space that allows people to experience, observe and feel the waste that they have generated. It is made to make people realise the amount of plastic waste they generate intentionally or unintentionally. 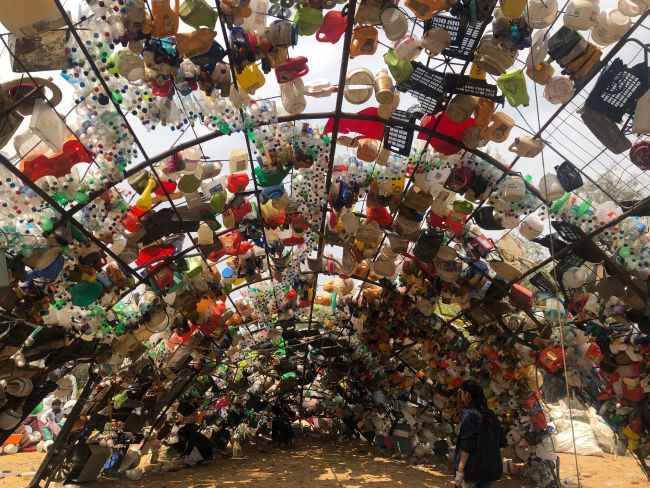 The toxic chamber, a large cave like structure, made using plastic and e-waste

According to Arun Kumar, the waste used in making the toxic chamber could be one person’s usage in five years. A walk inside the toxic chamber is an eye-opener for people, and gives out the message that they need to change their habits, soon, says Gayatri Singh, Director at ArtPilgrim Live.

While a ‘waste detector’ which is basically a garbage man with a detector in his hand created by Pinaki R Mohanty, one of the artists brings attention to the importance of waste segregation and reducing the waste load on landfills, ‘steal the treasure of nature’ – a giant hand of plastic established right next to a tree, by Ramkumar Kannadasn, depicts plastics suffocating tree and taking over greenery. 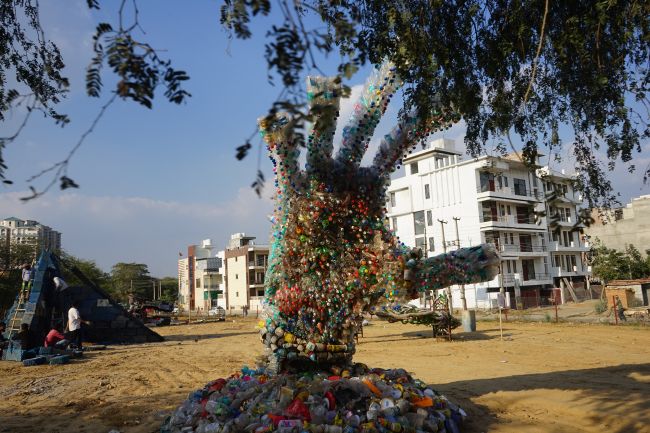 In Gurgaon, a giant hand made using plastic waste trying to steal the treasure of nature

On the other hand, ‘left over’, one of the art installations portrays a fish that has died due to plastic and all that is left is plastic. The art shows how plastic is threatening the lives of both humans and animals. 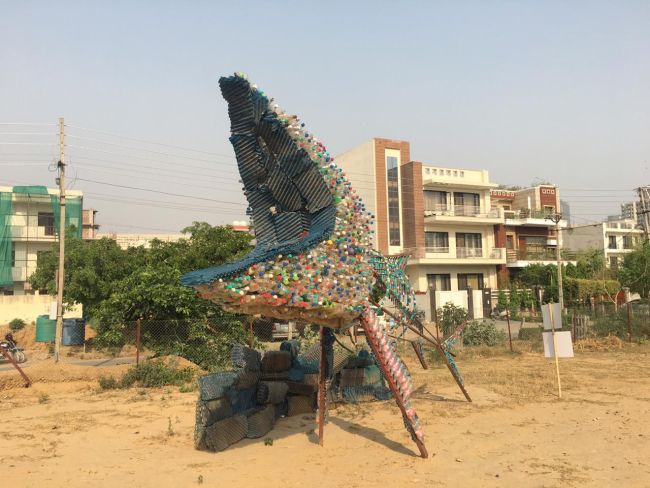 While talking about turning the concept of educating through the medium of art into reality, Nidhi Kankan says,

Waste has played a major part in giving life to our idea. For the same, we sourced plastic waste and scrap from 10 resident welfare associations (RWAs), 14 schools and four private offices. We managed to collect 11.5 tonnes of different kinds of waste including plastic, iron, metal, and e-waste.

The place is now known as Samadhaan (solution) hub, mainly because apart from hosting varied art installations, the place holds awareness sessions and workshops on different kinds of waste, waste segregation, and composting.

The idea is simply to create a space where people can come and donate waste and learn new things. Ours is a step in that direction, signs off Nidhi.