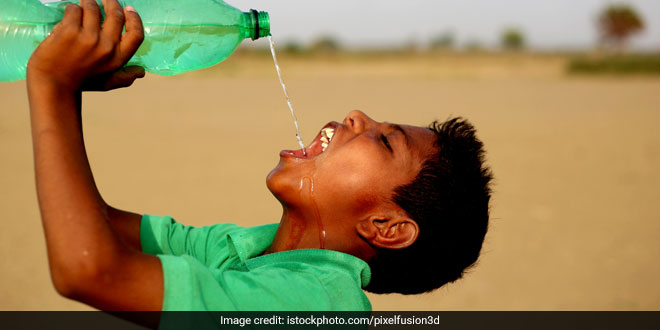 Mumbai: It has been over two decades since Laxmi Sagar, a mother of two, has been living in Asia’s second largest slum Dharavi in Mumbai. In 1998, when at the age of 10 she moved to the sprawling city along with her family in the hope of a better life, little did she know that something as basic as access to clean drinking water would turn out to be a day to day struggle in India’s financial capital, Mumbai. It is 2018 and still the problem of clean water persists. Like her, even her children are victims of contaminated water. She counts her blessings as, unlike the two-lakh people who die every year in India due to inadequate access to safe water, no one from her family has had to face death yet.

It is a well-known fact that India is currently going through a water crisis and the two major challenges that it faces today are insufficient water supply due to pollution in freshwater source and rampant water pollution. According to a NITI Aayog report, 70 per cent of India’s water is contaminated and 600 million people in country are facing a high-water stress. The same report also underlines that by 2030, country’s water demand is projected to be twice the available supply, implying severe water scarcity for hundreds of millions of people and an eventually a 6 per cent loss in the country’s GDP.

India is a constant victim of ‘too much and too little water syndrome’ resulting in recurrent cycles of droughts and floods. The weak and diffused water laws, policies and poor public accountability towards service delivery of safe water to all throughout the year have resulted in a situation where 600 million Indians face high to extreme water stress. This is a serious situation and needs immediate and massive reforms in water sector by states and Centre, Puneet Srivastava, Manager-Policy at WaterAid India tells NDTV.

So, how did India, which boasts of its civilisation that grew around Indus and Ganges for thousands of years come to a situation where it is struggling to meet people’s water demands and its major cities like Bengaluru and Delhi are likely to run out of water in near future. The NITI Aayog report warns that Bengaluru will run out of water by 2020. 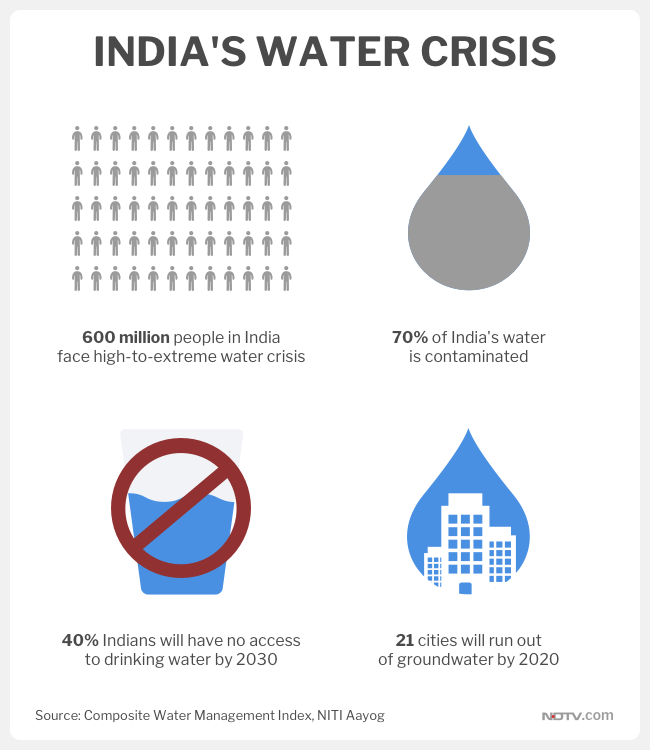 Reasons For Water Scarcity In India include:

Cities across the country – from Chennai in the south to Shimla in the northern hills, from Rajkot in the west to Cherrapunji in the north-east – are facing the crippling effects of acute water scarcity. There is hardly any city that can boast of a 24-hour water supply. Groundwater tables are falling rapidly, centuries-old water bodies have disappeared or are severely polluted, and urban floods are becoming a regular phenomenon during monsoons. In addition to this, most of our rivers have become carriers of urban filth. This scarcity-pollution tango is giving rise to a nightmarish scenario in which urban populations – mainly the urban poor – are at the receiving end, explains Sushmita Sengupta, Programme Manager, Centre for Science and Environment.

As per the NITI Aayog report, the demand for water is likely to exceed supply two fold by 2030 and 40 per cent of Indians will have no access to drinking water by 2030. To meet this huge demand and supply gap and prevent water scarcity for hundreds of millions, we need to start making changes from today.

Here are some of the long-term and immediate solutions India should adopt to prevent a water crisis:

Delhi based Centre for Science and Environment estimates that just by not wasting rainwater and storing it could supply 26 gallons of water per person. Rain water harvesting system is one of the most effective methods to manage and conserve water. It involves collection and storage of rain water at surface or in sub-surface aquifer, before it is lost as surface run off (surface run off, also known as overland flow, is the flow of water that occurs when excess stormwater, meltwater, or other sources flows over the Earth’s surface)

21 cities including Delhi, Chennai and Hyderabad will run out of groundwater in the next two years according to the NITI Aayog report. Arresting the decline in groundwater requires two approaches: speeding up groundwater recharge and checking indiscriminate exploitation.

Groundwater aquifers need to be regenerated, rainwater harvesting schemes need to be taken up in urban areas, temple tanks need to be renovated and urban wetlands protected. All these will contribute to a rise in the groundwater level and a reduction of salt water ingress, a movement of saline water into freshwater aquifers, which can lead to contamination of drinking water sources

The government should delink ground water from land rights and acknowledge water as common resource. Further, ground water should be well regulated, monitored and violators should be penalised. Also, to stop rampant extraction, service providers need to ensure that everyone living in cities or villages should be assured of minimum basic safe water supply irrespective of their status through household taps and recognised public points, including urban poor and homeless as a matter of basic human right, comments Mr Srivastava.

The recent water crisis in Shimla was attributed to loss of green cover. Loss in green cover prevent natural retention of water in the soil and more flooding during rains. Without much green cover, harvesting the flow of water also becomes difficult. Thus, afforestation and creation of rain gardens by using native plants and local soil can allow water to percolate into the ground. It also helps in removing the pollutants from water. Furthermore, large catchment areas near the water bodies encourage the recharge of groundwater. Afforestation in drainage basin enhances storage and reduces the surface runoff. This reduces a river’s discharge and so makes it less likely to flood.

Be it the mighty river Ganga, or Bengaluru’s Bellandur lake, most of the water bodies in India are either polluted and unfit for water consumption or have gone dry limiting the sources of water. In 2017, the Union government said that 275 of India’s 445 river stretches are polluted. Water from these river stretches were reported to be unfit for consumption and were heavily laden with bacteria and pollutants like zinc and lead.

With the government focusing on reviving Ganga and Yamuna through the Namami Gange action plan and Swachh Bharat Abhiyan gaining momentum among the citizens, every state must involve locals and municipal bodies to restore and clean the polluted water bodies. Besides allocating funds to cleanup the rivers, other measures like preventing open defecation industrial effluents from getting discharged into the river, imposing heavy penalties on defaulters must also be introduced by the government.

Government can arrange for infrastructure that can help stop all sort of waste and faecal contamination going into surface water bodies such as ponds, lakes, rivers etc. by strengthening solid and liquid waste management at all levels. At the same time, run programmes to make people aware of the water quality standards and health hazards associated with the consumption of unclean water, says Mr Srivastava.

5)  Efficient Use Of Waste Water/Water Recycling

The Swachh Bharat mission has focused on the issue of wastewater and steps are being taken to improve the quality and quantity of water recycled. The number of toilets being built, which is over eight and half crore so far, will increase the amount of wastewater generated. A proper mechanism, if in place, can ensure that we are well-equipped to deal with the problem of wastewater, said Arunangshu Mukherjee, Member Secretary, Ministry of Water Resources.

Experts suggest that all the industries in India must reach the zero-water stage where greywater is recycled to an extent that the demand for fresh water becomes negligible. It is also possible to practice greywater recycling at home. The water used for washing hands, vegetables, dishes or even for bathing can easily be recycled to reduce the burden on water. An individual consumes around 135 litres of water a day of which around 80 litres is recyclable.

Recycling water will not only help in bridging the demand and supply water gap but will also prevent sewage from households and effluents from industries from polluting the water bodies.

This Independence Day, Here’s How To Free India From Unsafe Menstrual Hygiene Practices