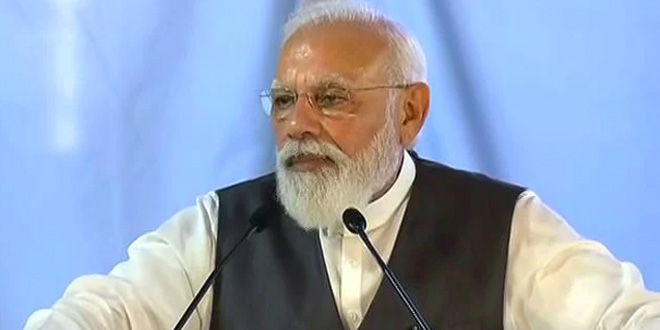 Rishikesh: Lauding the country’s healthcare sector, Prime Minister Narendra Modi on Thursday (October 7) said the government aims to set up at least one medical college in every district. In his address at an event in Rishikesh, the Prime Minister said, “About 6-7 years ago, only a few states had the facility of AIIMS. Today, work is being done to take AIIMS to every state. We are moving fast from six AIIMS to build a strong network of 22 AIIMS. It is also the goal of the government that there must be at least one medical college in every district of the country.”

Appreciating former Prime Minister AB Vajpayee’s contribution for the development of Uttarakhand, the Prime Minister said, “Atal ji had fulfilled the dream of the creation of Uttarakhand. Atal ji believed that connectivity is directly related to development. Due to his inspiration, today work is being done to ensure connectivity via infrastructure in the country at unprecedented speed and scale.”

It is a matter of pride for every Indian that 93 crore doses of COVID vaccines have been administered. Very soon, we will cross the 100 crore mark. India has shown the way to the whole world that by building the Co-WIN platform, one can carry out the vaccination drive on such a large scale.

Also Read: Indians Have Fought The Battle Against COVID With A Lot Of Patience, Says PM Modi

Prime Minister Narendra Modi lauded the country’s capability to battle the COVID-19 pandemic and recalled India’s journey from being an importer to an exporter of masks and kits. In his address at an event here, the Prime Minister said,

The facilities that India has prepared in such a short time to fight against COVID-19 shows the capability of our country. A network of about 3,000 testing labs from just one testing lab has been created. It is a journey from being an importer to exporter of masks and kits.

“We have facilities of new ventilators even in remote areas of the country. We have rapid and large-scale manufacturing of made in India COVID-19 vaccines. We are carrying out the world’s largest and fastest vaccination campaign. What India has done is a symbol of our determination, our service, our solidarity,” said PM Modi.

In normal days, India used to produce 900 metric tonnes of liquid medical oxygen a day. As the demand increased, India increased the production of medical oxygen more than 10 times. This was an unimaginable goal for any country in the world, but India has achieved it, PM Modi added.

Prime Minister Narendra Modi dedicated to the nation 35 Pressure Swing Adsorption (PSA) oxygen plants established under the PM CARES Fund. The ceremony had begun at 11 am at AIIMS Rishikesh, the PMO’s statement said.

Half Of Global Population Lack Access To Basic Diagnostics For Common Disease: Lancet