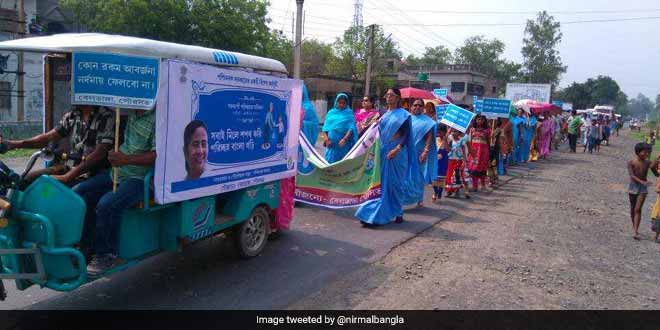 New Delhi: As the Swachh Bharat Abhiyan enters its third year, the progress of several states in eradicating open defecation has been praise worthy. In addition to the three states of Sikkim, Himachal Pradesh and Kerala, the rural regions of Haryana and Uttarakhand have also been declared open defecation free (ODF). West Bengal had simultaneously launched its own sanitation programme called Mission Nirmal Bangla on October 2, 2014. The programme, has given districts the flexibility to set their own ODF deadlines, and has achieved significant success across the state, with rural sanitation coverage in Bengal going up to 92 per cent.

Under Nirmal Bangla, 76 out of Bengal’s 125 urban towns and cities have achieved open defecation free status, accounting for nearly 61 per cent of the state’s urban areas. The progress for Bengal has been impressive, as the state government has declared that 24 more towns and cities will join the ODF list by the end of December 2017. The state’s success in getting its urban areas ODF has been spread across some of Bengal’s lesser developed districts such as North 24 Parganas, Nadia, Hooghly, Burdwan and East Midnapore.

The figures were a subject of an administrative meeting held on August 4 which saw the participation of Chief Minister Mamata Banerjee. The meeting saw discussions about the ODF zones where adequate number of individual household toilets, community sanitation complexes and public toilets were built to eradicate open defecation from the 76 towns and cities. Public toilets and sanitation complexes in particular have been the focus of the Nirmal Bangla mission. Nadia, the first ODF district in the state built over 10 lakh household toilets to achieve the ODF tag. Under the Nirmal Bangla mission, over 16,000 public toilets have already been built across highly populated districts in the state.

Since the launch of the mission, the state government has focused equally on the importance of building individual household toilets, as well as public and community toilets in the state. We have roped in district magistrates from all major districts as well as officials from civic bodies to take stock of the remaining towns and cities so that all of them get ODF status by the end of this year, said Sonali Datta Ray, Additional Mission Director, Mission Nirmal Bangla.

The mission has also been praised highly by the United Nations’ International Children’s Emergency Fund (UNICEF. Nadia’s ODF status was celebrated by UNICEF, which praised the state government for its efforts in bringing hygienic sanitation solutions. To achieve its target of making 100 towns and cities ODF by the end of December 2017, the government has already shortlisted districts which need urgent attention and allotted funds to civic bodies to commence construction of public and community toilets. The Nirmal Bangla Mission provides Rs 2 lakh for construction of community sanitary complexes. In the remaining 24 districts, the government has already identified villages/gram panchayats where sufficient space is not available for construction of household toilets. Funds to the civic bodies have been duly released and they have been directed to begin construction of toilets at the earliest.

We will be happy if we can declare 100 towns and cities ODF throughout the state by the end of December 2017. We have already surveyed and identified towns which need immediate attention and will begin the construction of the remaining toilets. Overall, we aim to become completely ODF in both rural and urban areas by August 15, 2018, said Mrs Datta Ray.

Bengal’s progress in improving rural and urban sanitation has been impressive, despite its dissociation from the Swachh Bharat Abhiyan. In the coming days, the state will have to push its success further in terms of becoming open defecation free.

Also Read: A 21-Year-Old Is Bringing In Positive Change In Kolkata’s Public Toilets By Making Them Transgender-Friendly