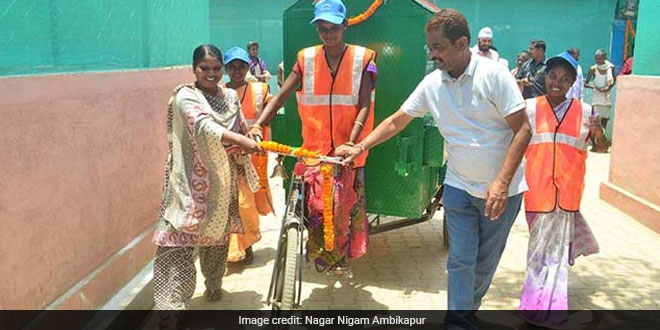 The first state to introduce door to door garbage collection through E-rickshaws – Chhattisgarh, has now flagged off these E-rickshaws in capital Raipur, after their success in Ambikapur district. On May 26, Union Development Minister, M Venkaiah Naidu, flagged off the door to door garbage collection E-rickshaws that will be manned by women who are living below the poverty line. The E- Rickshaws that have just been launched in the city will take about a month to be rolled out. The city currently collects waste using the eight bucket system rickshaws. These rickshaws carry eight buckets out of which two are used to collect wet waste and the rest six are for dry waste. The E-rickshaws would just have three compartments, one for dry waste, one for wet waste and the other for disposal of sanitary pads and all. Mr Naidu tweeted about the flagging off and said that these rickshaws will be used by Self Help Groups (SHGs) for waste collection in Raipur.

Flagging off the door to door garbage collection rickshaws to be used by SHGs for waste collection in #Raipur. #MyCleanIndia @Moud_India pic.twitter.com/lSj63Bgx8e

The E-rickshaws are aluminum built and each cost Rs. 48,000.  The women operating the rickshaws would be employed for twin purposes, first for full time door to door garbage collection, segregation and composting and secondly, to collect user chargers (the money collected for providing the service of door to door waste collection). The user charges would vary from residential to commercial. For residents the user charges are, Rs 50 is minimum and maximum is Rs. 100, depending on the distance. For commercial complexes the charges start from Rs.100.

We are in talks with the SHOs. For now we would just undertake one or two groups, just to analyse the positives and negatives of the functioning, said Harvendar Sahu, Executive Engineer of  Raipur Municipal Corporation and in-charge officer of Swachh Barat Mission.

Mr Sahu adds that out of 70 wards, 42 are crossing above 90 percent in terms of door to door collection with the current method of eight bucket rickshaw.

None of our ward is below 30 percent of door to door waste collection, but our motive under clean India mission is to make it 100 percent, said Mr Sahu.

The city is of 226 km², we already have 100 of these vehicles but there is a requirement of 200 more, says Mr Promod Dubey, Mayor, Raipur Municipal Corporation.

Raipur will now follow the same pattern as Ambikapur. The segregation would begin from home, where each house would be given red and green boxes. The red box will contain inorganic wastes like paper, cardboard, plastic, electric wires, glass, metal, rubber, bottles, foot-wears and green box contains organic waste like vegetables, garden leaves, meat leftovers, coconut, tea and wood. A separate bin would be given for sanitary pads, diapers and plastic which is meant to be covered and would go for permanent disposal.

These would then be brought to Solid Liquid Resource Management (SLRM) centers where further segregation of recyclable, non-recyclable and composting would begin. Currently, out of the 413 tons of waste that is generated everyday and 15 percent of it goes for composting. That figure is likely to go up with all the measures that Raipur is now undertaking.