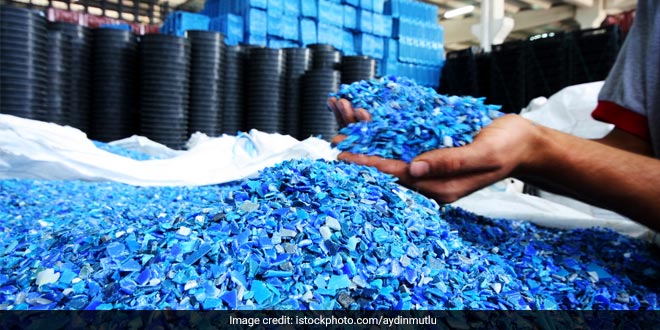 New Delhi: The first news of recyclable plastics came out of Colorado University, in April 2018, The material, created by Chen Resrearch Group, headed by Professor Eugene Chen of the University’s Department of Chemistry, has the same characteristics as that of plastic, including durability. When signs of wear and tear are spotted, the plastic can be recycled using chemicals, and that too multiple times. The material has already been tested multiple times and is being seen as a potential raw material. The material holds much potential in a country like India, which is struggling to recycle plastics on a large scale.

Purchases in India, big or small, are incomplete without bought goods being shoved into a plastic packet. The lifecycle of a plastic bag is often a short-lived one, discarded after being used once or twice, disposed of in some part of an already overburdened landfill or make its way to the nearest water body. India produces an astonishing 25,000 tonnes of plastic waste daily, approximately 40 per cent of which in its untreated form, goes to landfills or waste dumps. In the last few years, the problem of plastic pollution has been addressed in India across different spectrums. Bans have been placed on plastic and alternatives such as cloth bags have been heavily promoted, though the widespread and economically viable reach of plastics is difficult to curb.

The non-biodegradable nature of plastic makes it fit only for recycling. From cutlery to fuel, plastic can be recycled and used for various purposes but the infrastructure for plastic recycling in India remains underdeveloped, resulting in a large gap between the plastic waste produced and recycled. The plastic economy’s unorganised structure has made it difficult for the government to make big strides in regularising recycling. Recycling of plastic has also not caught up as a waste management culture in India, as unscrupulous disposal of plastic bags is still commonplace. As the country is trying to bring in a culture of plastic recycling, a new breed of recyclable plastics could change India’s dynamics.

The problem with plastic recycling in India is that there is too much plastic to recycle and too little infrastructure to accommodate that amount. Plastic have become an integral part of daily life across India, and as much as the government promotes recycling, it is not easy to recycle 100 per cent plastic waste. If recyclable plastics become common in the market, then it will ensure that the rate of recycling becomes faster, said Professor Anup Sinha of the Centre for Development and Environment Policy, Indian Institute of Management, Calcutta.

Also Read: Plastic Straws Are One Of The Most Useless Inventions, Ditch Them, Says UN Environment Head Erik Solheim

Though the technology of an infinitely recyclable plastic has just been tested, it will not before long the technology is made available in markets. From an economic point of view, such a technology will definitely hurt the Indian plastic industry as public and private sectors may take up recycling more vigorously, rather than investing in manufacturing of new plastics, said Mr Krishnamurthy.

Recyclable plastics could also help in cutting down costs in the goods industry. Since a recyclable plastic will itself be a raw material, plastic manufacturers will no longer need to procure raw materials to manufacture plastic. Cost of plastic waste treatment will come down, as generation of plastic waste will come down, resulting in more recycling and reusing.

“Environmentally, the concept of recyclable plastic is something plastic experts have been advocating for years. The recent invention at Colorado University has brought many reasons to cheer, as infinitely recyclable plastic will reduce plastic waste generation, one of India’s biggest environmental problems. Simultaneously, it will help us in cleaning our cities, move towards achieving zero landfill goals and help us in tackling the recurring problem of plastic waste,” said Kundan Singh Shahi, Seniors Scientist at Central Pollution Control Board.

The recent ban on plastic in Maharashtra has come under severe scrutiny, as a sudden ban has put several people out of jobs and the state plastic industry staring at a loss of Rs 800 crore. The entry of recyclable plastics in India may result in bigger losses. So if recyclable plastics enter the Indian market in the future, how will the sector handle the transition?

Recyclable plastics are not an immediate threat to India’s plastic industry currently. But given how the country is desperately looking to tackle the problem of plastic pollution, experts are of the opinion that recyclable plastics will make their way to India, once they product itself is commercialised. While recyclable plastics will undoubtedly be helpful in tackling the problem of plastic pollution in India, care must be taken to introduce it gradually to mitigate any fallout of the transition in economic terms, as well in terms of the logistics of the roll out and implementation.

World Environment Day 2018: The Crisis Of Microplastics In India Needs To Be Addressed Urgently

World Environment Day Special: Surrender A Plastic Bottle, Get A Sapling In Return – A Mumbaikar’s Initiative To Combat Plastic Addiction