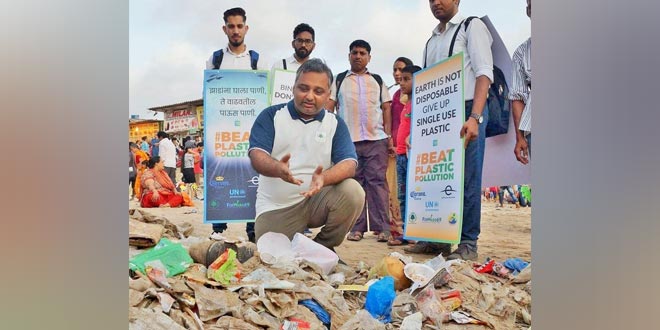 Mumbai: What would you rather leave behind, plastic bottles or trees? Was a question that served as a trigger point for the 38-year-old Subhajit Mukherjee, a resident of Kandivali. Concerned about the burgeoning plastic crisis and rampant use of the non-biodegradable item, Subhajit decided to not only discourage people from using plastic but also provide them an incentive to opt for an alternative. Thus, emerged the idea of exchanging a plant sapling with a PET bottle. So, do not be surprised if you see a passionate group of volunteers in Mumbai armed with plants in one hand and awareness posters in the other, distributing saplings to cut down city’s plastic waste.

It was in 2017 when Subhajit, an environment lover, ended his 12-year-old career and started his NGO Mission Green Mumbai with an aim to bring some greenery in the concrete jungle of Mumbai. He tied up with the Brihanmumbai Municipal Corporation (BMC) to plant trees across the city. And while he was carrying out his mission, the Maharashtra government imposed a ban on plastic items.

The morning after the plastic ban was imposed, my wife was reading a newspaper when she happened to mention about the ban to me. Like many people, her first thought was how will she carry out her day-to-day activities without plastic. From using plastic bags to carry vegetables to purchasing plastic bottles when outside the house, we have developed a severe case of plastic addiction, explains Subhajit, who believes that plastic addiction is as bad as addiction of drugs.

Killing two birds with one stone, he clubbed the two issues that harm the environment and started the plastic collection drive across the city along with 200 plus volunteers. 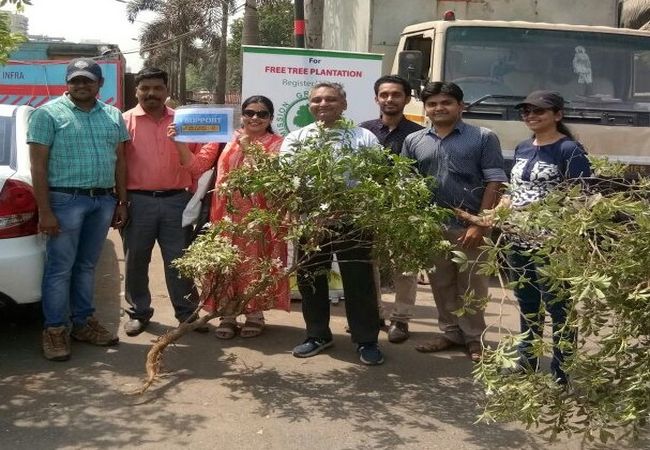 The organisation has so far collected 4,000 PET bottles and given more than 1,000 saplings to Mumbaikars

How does The Plastic For Plant Exchange Work?

Simple, as a citizen of Mumbai, you can either go on the NGO’s portal and request them to collect your plastic bottle or if you happen to see a bunch of volunteers collecting PET bottles and giving out plants in Mumbai you can go up to them and deposit your plastic bottles or carry bags. 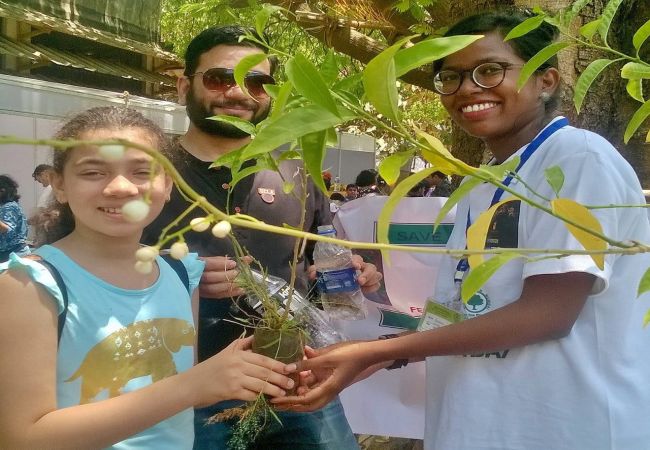 In the last two months, the group has visited several public places including markets, railway stations, malls, beaches and convinced thousands of people to give up plastic bottles and bags. While some volunteers stand with a plastic pollution message poster, others go upto the passerbys and tell them about the exchange offer. With people extensively using WhatsApp and Facebook, the volunteers are spreading awareness through social media as well.

The organisation has also involved the local schools, “A parent will be curious to know about the motive behind the kid asking for plastic bags and bottles at home and that is how the word will get around, he adds.

The self-funded organisation has so far collected 4,000 PET bottles and given more than 1,000 saplings to Mumbaikars. A total of 600 cloth bags have also been distributed in the drive, in exchange for plastic carry bags.

Also Read: ‘I Am Refusing Single-Use Plastic Cups For #WorldEnvironmentDay. What Will You Do? Environmentalist Afroz Shah Asks Amitabh Bachchan And Anushka Sharma

Subhajit has collaborated with the Research wing of BMC to deposit all the plastic items they collect. The plastic will further be shredded and used by the BMC in the construction of roads. As for the plastic bottles, they will be given to certified recycling units, thus ensuring that none of the plastic collected from people reaches the landfill. Some of it will be handed over to a local NGO who will recycle it and make benches out of it. 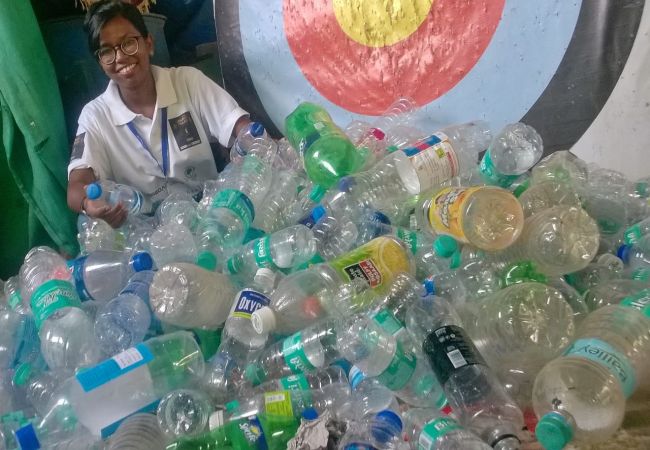 Even though the entire project is self-financed, and his wife, an advocate, is the only earning member in the family, Subhajit has never let the financial issues overpower his goal of securing a better future for the next generations.

With every sapling costing around Rs 100, finances have been a major challenge for us. However, thanks to the people who are equally passionate about the cause, our NGO has been able to sustain in difficult times. For instance, a gentleman decided to sponsor a banner for us after he came to know about our initiative recently.

Talking about bringing a change in people’s attitude towards switching from plastic bottles and bags, Subhajit sums up his experience in one sentence – everyone talks about the cure, no one is willing to start a conversation on prevention. It is indeed good news that people have started to realise about the plastic problems, however changing consumption pattern hasn’t been fully explored yet, he says.

When we ask people to not use plastic bottles or bags, they often refute it by giving excuses like lack of alternatives. At times they even go on to the extent of saying that it is the duty of authorities to clean-up the mess caused by plastic waste. 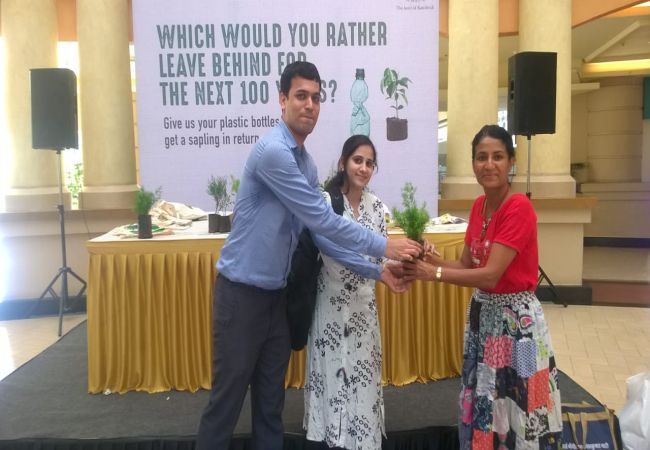 From making people aware about the drinking water facilities in public places to prevent them from taking plastic bottles, telling them about the shelf-life of a plastic carry bag to giving them suggestions on eco-friendly options, the volunteers make sure they leave a lasting impact on people in their campaign drives.

Is it possible to eliminate every ounce of plastic from our lives? Where there is a will, there is a way, Subhajit exclaims.

It is only in the last 15-20 years, that our consumption of plastic has significantly increased. Before that, we were surviving as a society. Plastic has today penetrated so deeply into our lives that it is affecting our oceans, marine life, food chain. It is high time we understand the future repercussions of using even a single piece of plastic item that takes upto 500 years to decompose.

As this year’s World Environment Day’s (June 5) theme is ‘Beat Plastic Pollution’, the NGO will carry out five ‘Plants for Plastics’ events across the city. They even aim to register a record in Limca Book of Records for collecting the highest number of plastic bottles. The target is to collect atleast 10 tonnes of PET bottles.

Inspired by lawyer-activist Afroz Shah’s massive beach cleanup drive on Juhu beach in Mumbai, Subhajit is now venturing into the issue of keeping the city beaches clean and plastic-free. On their very first cleanliness drive on May 6 at Juhu beach, more than 20 volunteers came forward and participated. In the 4,000 plus crowd gathered on the beach, volunteers took a silent walk with placards carrying hashtags like #KeepJuhuBeachClean #NoToPlastic and #UseDustBins. Seeing the volunteers, a few visitors also joined the walk. The drive will be conducted every Sunday, says Subhajit. 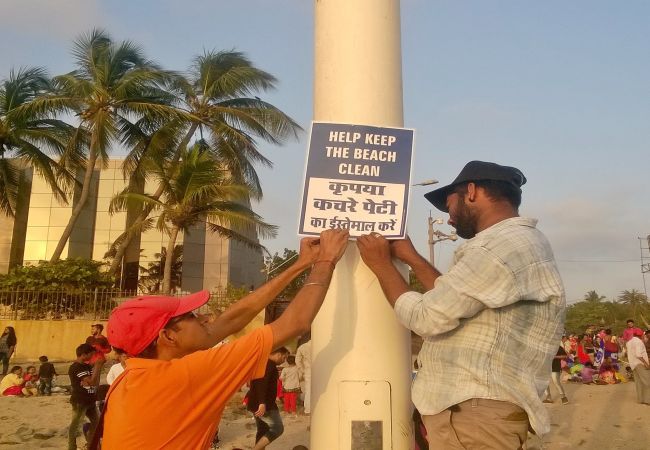