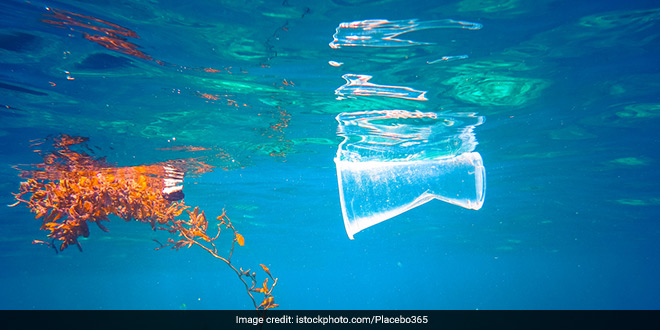 London: Fresh from a gruelling sea journey of more than seven hours negotiating 24 miles (38.6 km) of the world’s busiest shipping lanes on a paddle board, Lizzie Carr is on a mission. She recently became the first woman to cross the English Channel solo on the flimsy stand-up craft, to draw attention to the “global plastic crisis“. From fishing lines to flip flops, there are more than 5 trillion pieces of plastic floating in the world’s oceans, according to a 2014 study published in a Public Library of Science journal.

Plastic degrades over time into tiny particles known as microplastics which can be ingested by marine life, together with plastic microbeads used in toiletries and other household products, harming the food chain and environment.

“When you hear… about microplastics and microbeads, there’s still a lot of confusion around what that means, and how we’ve contributed to that,” Ms Carr told the Thomson Reuters Foundation.

Every four miles along the trip from England to northern France, she collected water samples for microplastics analysis by Plymouth University.

Ms Carr has also launched #PlasticPatrol campaigns, combining free paddle-board lessons with clean-up operations of waterways, canals and harbours across Britain, to encourage local communities to get onboard.

Also Read: Can Caterpillars Save The World From Plastic Pollution Crisis?

She is now developing a phone app and a crowd-sourced map to encourage the public to photograph plastic pollution to identify trends and hot spots. “It’s about putting the power into the hands of the people,” she said.

Plastic debris has been found littering the oceans from the North to the South Poles and around remote Pacific islands.

But only 1 percent is thought to be floating on the sea surface – the remaining 99 percent is scattered along coast lines, buried deep in sea-beds or hidden in the guts of marine creatures, said Erik van Sebille, oceanographer and associate professor at Utrecht University.

Marine experts fear there could be more plastic than fish in the ocean by 2050, measured by weight, according to a factsheet from the Ellen MacArthur Foundation, a UK-based charity working to end waste in the economy.

(Plastic) is shockingly widespread – it literally is almost everywhere in the ocean, it’s omnipresent, said van Sebille, who studies how ocean currents move plastic around.

Keeping It In The Economy

Internationally, significant efforts are being made to remove plastic from the world’s water bodies.

One example is “The Ocean Cleanup”, a Dutch foundation formed after a speech by a concerned Dutch teenager went viral online. It aims to clear over half of the “Great Pacific Garbage Patch”, an area between Hawaii and California where ocean currents have concentrated plastic debris.

Meanwhile, customers must pay for plastic shopping bags in some countries like Britain and Ireland, while France has banned them outright, adding disposable plastic cups and plates from 2020.

Kenya is also bringing in a complete ban on household and commercial plastic packaging after a successful grassroots social media campaign.

With an estimated $80 billion to $120 billion of plastic packaging material lost to the economy each year, there is a financial incentive for business to reuse plastic.

Unilever, the food and personal goods giant that owns brands such as Dove and Lipton, has developed new technology to recycle plastic sachets, which normally end up in landfill or as litter, and channel them back into the supply chain. It will open a plant later this year in Indonesia to test the viability of the technology.

Forty percent of plastic produced globally is destined for single-use packaging, according to Stephanie Wright, an environmental scientist at King’s College London.

It’s a material that lasts forever, but we’re using it as a one-off, she said.

Last month, the Ellen MacArthur Foundation and the Prince of Wales’ International Sustainability Unit launched a $2-million prize to come up with new ways to design packaging to help keep plastics out of the ocean.

“It’s built to keep a chicken fresh or to keep shampoo in a container, and be cheap to sell, but there’s no process for that material to be recovered and to create (a) restorative, regenerative and ultimately resilient model,” she said.

MacArthur’s interest in the issue came from having to make the most of limited resources at sea.

When you sail around the world on a boat… you take with you what you need for your survival, and you manage it down to the last drop of diesel and the last packet of food, she said.

You know what finite is when you’re 2,500 miles away from the nearest town and there is no more, she added.

Scientist Wright warned that the problem of plastic pollution could be around for a long time.

Even if we stop putting litter into the sea tomorrow… all the plastic that’s still there is going to continue to break down,” she said. “We have to anticipate it might get worse in the future.

This year’s World Oceans Day, marked on June 8, has a focus on tackling plastic pollution and preventing marine litter.

Van Sebille argues that, at this stage, preventative measures to stem the flow of plastics would be more effective than trying to clean up the mess.

Plastic production has seen “an exponential increase” since the 1950s, he said. “On current trends, in the next five years we’ll be producing more plastic than all the twentieth century,” he said. “There’s an enormous amount of plastic coming our way.”

Cities could take the lead in an urbanising world, as they are widely responsible for waste management, he suggested.

He also advocated fixing the holes in the current recycling process where a third of plastic packaging ends up being lost or wasted during collection and processing.

The oceans belong to us all,” he said. “This is really a worldwide problem that we, as global humanity, need to tackle.